Pope Francis is greeted by young children in traditional clothing upon his arrival at the Yangon airport on Monday. (AP photos)

YANGON: Pope Francis opened a diplomatically fraught trip to Myanmar and Bangladesh on Monday by immediately diving into the crisis over Myanmar’s crackdown on Rohingya Muslims.

On Tuesday, Francis begins the main protocol portion of his week-long trip, meeting with Suu Kyi and other officials. He is to deliver a speech to her and other Myanmar authorities and diplomats in the capital, Nay Pyi Taw, in what will likely be the most closely watched speech of the trip.

He met Monday with the country’s military chief, even before beginning the official program of his trip.

The Vatican didn’t provide details of the contents of Francis’ 15-minute “courtesy visit” with Snr Gen Min Aung Hlaing and three officials from the bureau of special operations. No photos were allowed or released.

It took place at the residence of the archbishop of Yangon, Cardinal Charles Bo, who has resisted international condemnation of the military’s operations against Rohingya as “ethnic cleansing.”

The general is in charge of security in Rakhine state, where the military’s “clearance operations” against the Muslim minority have sent more than 620,000 Rohingya fleeing into neighbouring Bangladesh. Refugees there have told of entire villages being burned and women and girls being raped.

Vatican spokesman Greg Burke said only that “They spoke of the great responsibility of the authorities of the country in this moment of transition.”

Snr Gen Min Aung Hlaing’s office said in a statement on Facebook that he is willing to have “interfaith peace, unity and justice.” The general added that there was no religious or ethnic persecution or discrimination in Myanmar, and that the government allowed different faith groups to have freedom of worship.
. 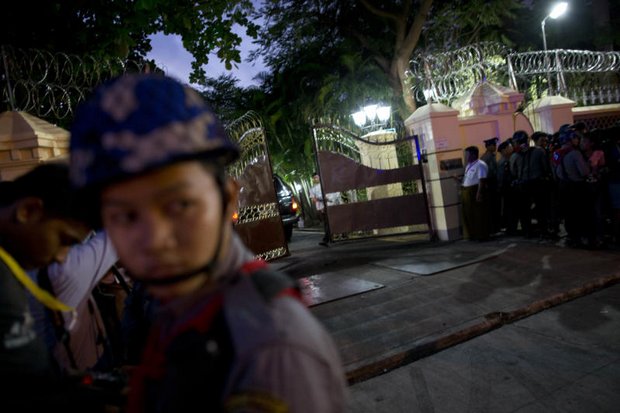 A security officer closes the gate of the residence of the Archbishop of Myanmar after a convoy of vehicles carrying Myanmar’s military leader, Snr Gen Min Aung Hlaing arrived for a meeting with Pope Francis.

Rohingya Muslims have faced state-supported discrimination in predominantly Buddhist country for decades. Though members of the ethnic minority first arrived generations ago, Rohingya were stripped of their citizenship in 1982, denying them almost all rights and rendering them stateless. They cannot travel freely, practice their religion, or work as teachers or doctors, and they have little access to medical care, food or education.

Originally, the meeting was planned for Wednesday, after Francis was to have met with the country’s civilian leader, Nobel Peace Prize laureate Aung San Suu Kyi, in the capital. The Vatican didn’t say why it was moved up.

Rohingya in recent months have been subject to what the United Nations says is a campaign of “textbook ethnic cleansing” by the military in Rakhine. But Myanmar’s Catholic Church has publicly urged Francis to avoid using the term “Rohingya,” which is shunned by many locally because the ethnic group is not a recognised minority in the country.

Francis has already prayed for “our Rohingya brothers and sisters,” and much of the debate in the run-up to the trip focused on whether he would do so again in expressing solidarity with the Rohingya’s plight. Any decision to avoid the term could be viewed as a capitulation to Myanmar’s military and a stain on his legacy of standing up for the most oppressed and marginalised of society, no matter how impolitic.

Burke didn’t say if Francis used the term in his meeting with the general, which ended with an exchange of gifts: Francis gave him a medallion of the trip, while the general gave the pope a harp in the shape of a boat, and an ornate rice bowl.

The trip to Myanmar and Bangladesh was planned before the latest spasm of violence erupted in August, when a group of Rohingya militants attacked security positions in Rakhine. Myanmar security forces responded with a scorched-earth campaign that resulted in Rohingya fleeing to Bangladesh, where they are living in squalid refugee camps.

In the Kutupalong refugee camp in southern Bangladesh, Senu Ara, 35, welcomed Francis’ arrival for what he might be able to do for the refugees.

“He might help us get the peace that we are desperately searching for,” she said. “Even if we stay here he will make our situation better. If he decides to send us back, he will do so in a peaceful way.”

But in Myanmar, the sentiment was different. The government and most of the Buddhist majority consider the Rohingya Bengali migrants from Bangladesh living illegally in the country, though Rohingya have been here for generations.

“Being a religious leader – Catholic leader – means that he is well-regarded, but of course there is this worry if he says something, people might say, ‘OK, he just came to meddle’,” said Burmese analyst Khin Zaw Win, a former political prisoner. “So, I think a lot of diplomacy is needed, in addition to the public relations.”

Seaman Kyaw Thu Maung said the issue is difficult because the term “Rohingya” carries so much political weight for all of Myanmar’s people.

“But my feeling is that if the pope is going to talk about the Rakhine issue, the people aren’t going to like the pope any more,” he said.

Upon his arrival in Yangon, the pope was greeted by local Catholic officials and his motorcade passed by thousands of Myanmar’s Catholics, who lined the roads, wearing traditional attire and playing music.
. 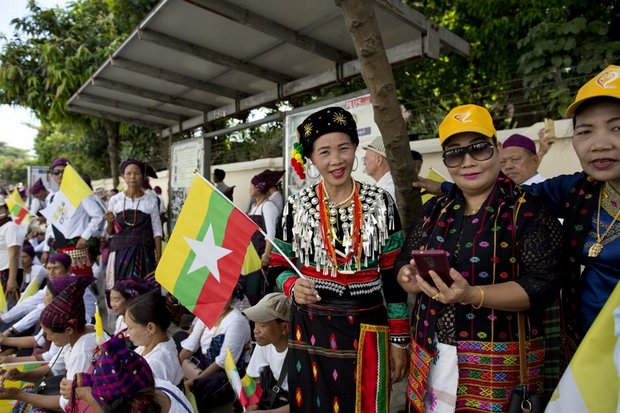 Ethnic Kachin Catholic devotees in traditional attire gathered along a road to see Pope Francis upon his arrive in Yangon on Monday.

Children greeted him as he drove in a simple blue sedan, chanting “Viva il papa!” (Long live the pope) and waving small plastic Myanmar and Holy See flags. Posters wishing Francis “a heartiest of welcome” lined the route into town.

En route from Rome, Francis greeted journalists on the plane and apologised for the expected heat, which was 32 degrees upon his arrival, since many of his party accompanied him from Rome, which was 9 degrees when he left.
.
Courtesy: The Bangkok Post | WRITER: ASSOCIATED PRESS <>
NOTE : All photographs, news, editorials, opinions, information, data, others have been taken from the Internet ..aseanews.net | aseanews@hotmail.com |
.
For comments, Email to :
Aseanews.Net | aseanews@yahoo.com  | Contributor
It's only fair to share... KUALA LUMPUR : State of Malaysia’s political parties – When will Mahathir hand over to Anwar?