Former US president George H. W. Bush has died at the age of 94. He was the 41st president of the United States.PHOTO: REUTERS

WASHINGTON (REUTERS, NYTIMES, AFP) – Former US president George H. W.  Bush, who presided over the end of the Cold War and routed Saddam Hussein’s Iraqi army, died on Friday (Nov 30) at the age of 94, a family spokesman said.

Mr Bush, the 41st president of the United States, lived longer than any of his predecessors. His death at 10.10pm Central time (12.10pm  Saturday Singapore time) was announced in a statement issued by long-time spokesman Jim McGrath.

His death came less than eight months after that of his wife of 73 years, Barbara Bush, in April. She was 92.

Mr Bush is the father of  the US’ 43rd president George W. Bush and former Florida Governor Jeb Bush.

“Jeb, Neil, Marvin, Doro and I are saddened to announce that after 94 remarkable years, our dear Dad has died,” George W. Bush said in a statement released on Twitter by a family spokesman.

“George H.W. Bush was a man of the highest character and the best dad a son or daughter could ask for.

“The entire Bush family is deeply grateful for 41’s life and love, for the compassion of those who have cared and prayed for Dad, and for the condolences of our friends and fellow citizens.”

He is survived by his five children and 17 grandchildren.

Funeral arrangements will be announced in due course, the family spokesman said.

President Donald Trump on Saturday (Dec 1) paid tribute to the late former leader, praising his lifetime of service to the nation and “unflappable leadership” during the waning days of the Cold War.

“Melania and I join with a grieving nation to mourn the loss of former president George H.W. Bush,” Trump said in a statement from Buenos Aires, where he was attending the G-20 summit.

“Through his essential authenticity, disarming wit, and unwavering commitment to faith, family, and country, President Bush inspired generations of his fellow Americans to public service.”

Former President Barack Obama said in a statement: “America has lost a patriot and humble servant in George Herbert Walker Bush. While our hearts are heavy today, they are also filled with gratitude.”

George H. W. Bush had one of the most impressive resumes of any US president

Mr George H. W. Bush had a form of Parkinson’s disease that forced him to use a wheelchair or motorised scooter in recent years, and he had been in and out of hospitals during that time as his health declined.

Mr Bush, a Republican, was a transitional figure in the White House, where he served from 1989 to 1993, capping a career of more than 40 years in public service. A decorated navy pilot who was shot down in the Pacific in 1944, he was the last of the World War II generation to occupy the Oval Office. 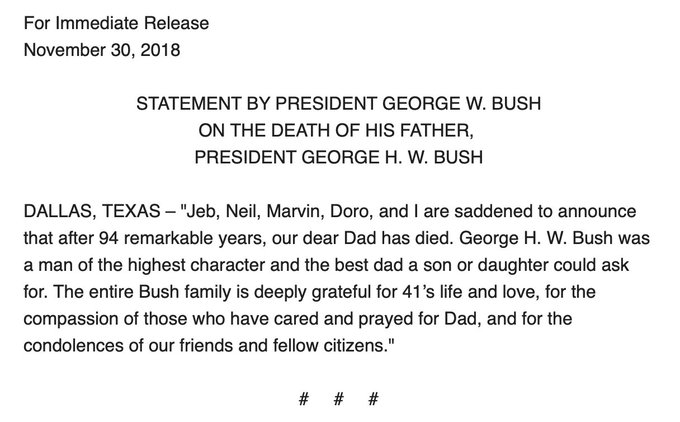 Statement by the 43rd President of the United States, George W. Bush, on the passing of his father this evening at the age 94.

Statement by the Office of George H. W. Bush on the passing of the 41st President of the United States of America this evening at 10:10pm CT at the age of 94.

Mr Bush was a skilled bureaucratic and diplomatic player who, as president, helped end four decades of Cold War and the threat of nuclear engagement with a nuanced handling of the collapse of the Soviet Union and the liberation of Eastern Europe.

Yet for all his success in the international arena, his presidency faltered as voters seemed to perceive him as detached from their everyday lives.

In an election that turned on the economy, they repudiated Mr George H. W.  Bush in 1992 and chose a relatively little-known Democratic governor from Arkansas, Mr Bill Clinton, ushering in a generational shift in American leadership.