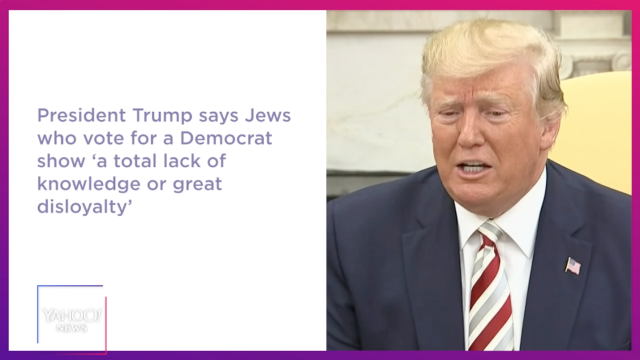 President Trump said Tuesday that Jews who vote for Democrats were either ignorant or disloyal.

Trump was asked if the United States should reconsider its policies toward Israel after the country refused to permit two Muslim-American U.S. congresswomen to enter.

“Any Jewish people that vote for a Democrat — I think it shows either a total lack of knowledge or great disloyalty,” said Trump. It wasn’t clear what he meant by “disloyalty” — and whether it be to Israel, the United States or their faith.

Although Trump has many prominent Jewish supporters and won in 2016 in some heavily Orthodox neighborhoods of New York City, the majority of American Jews have supported Democrats for generations, and continue to do so.

Trump has spent much of 2019 attempting to paint the Democratic Party as anti-Semitic, picking fights with two Muslim-American congresswomen, Reps. Rashida Tlaib of Michigan and Ilhan Omar of Minnesota, both freshman Democrats who were denied entry by the Netanyahu government, at Trump’s insistence, when they sought to visit the West Bank. Tlaib was eventually granted a humanitarian waiver to visit family but she declined, saying the conditions Israel attached were unacceptable.

“The Israeli government used my love and desire to see my grandmother to silence me and made my ability to do so contingent upon my signing a letter — reflecting just how undemocratic and afraid they are of the truth my trip would reveal,” said Tlaib in a statement.

The president himself has trafficked in “dual loyalty” accusations, referring to Israeli leader Benjamin Netanyahu as “your prime minister” when talking at a conference of Jewish-Americans and has called Israel “your country” at a White House Hanukkah celebration. Trump’s anti-immigrant rhetoric was blamed by some Jews for inspiring a terror attack on a Pittsburgh synagogue in which 11 people died last year.

While Trump and several Republicans have accused the congresswomen of being anti-Semitic, IfNotNow, a progressive Jewish group that has supported both Tlaib and Omar, sees the president as the one spreading hate.

“American Jews see through Trump’s lies,” Emily Mayer, IfNotNow’s spokeswoman, said in a statement to Yahoo News. “We watched as his 2016 campaign regularly used anti-Semitic tropes and inspired the rise of white nationalism. We’re still watching as he spews anti-Semitic and anti-immigrant rhetoric from the Oval Office, inspiring mass violence — and putting so many Americans, including our community, in real danger.

“Rashida has been one of the strongest allies of the Jewish people,” Mayer added. “Trump is once again cynically weaponizing our community’s pain to brush aside legitimate criticism of Israel’s human rights violations.”

Ivanka Trump, the president’s daughter, converted to Judaism when she married Jared Kushner and their children are Jewish. Trump has called himself “the least anti-Semitic person you’ve ever seen.” POLITICS: MANILA – WATCH: Duterte says he is tired and thinking of stepping down Singapore and THE WORLD NEWS on Thursday, Aug 22