Health
August 25, 2019 Contributor 0 Comment BANGKOK: Special hospital for the elderly gets an upgrade

Young at heart: An elderly sportsman who won a competition among elderly citizens at an event organised by the BMA at the Bangkok Youth Centre.

Bang Khunthian, which is the only coastal district in Bangkok, is famous for its seafood eateries and coastal views, but it’s also known for some less appealing qualities, like its severe coastal erosion.

But today, the district is also known for an altogether different thing: Thailand’s first state hospital for elderly patients.

The project, known as the Bang Khunthian Geriatric Hospital, was established in 2009 by former Bangkok governor MR Sukhumbhand Boripatra, and has offered outpatient treatment and dentistry services since 2012.

The hospital also offers special treatment for the elderly, including special clinics on acupuncture, diabetes, orthopaedics and even traditional Thai medicine.

The project was made possible with the help of two philanthropists — Uraisri Khanuengsukkasem and Pornthip Wongsiridech — both of whom are landlords and natives of the coastal district.

In 2009, these two women donated 24 rai of land in the Tha Kham area of the district to the Bangkok Metropolitan Administration (BMA).

For years, the pair tried to donate the land, which once hosted shrimp farms, for public purposes, without getting any attention from various authorities. 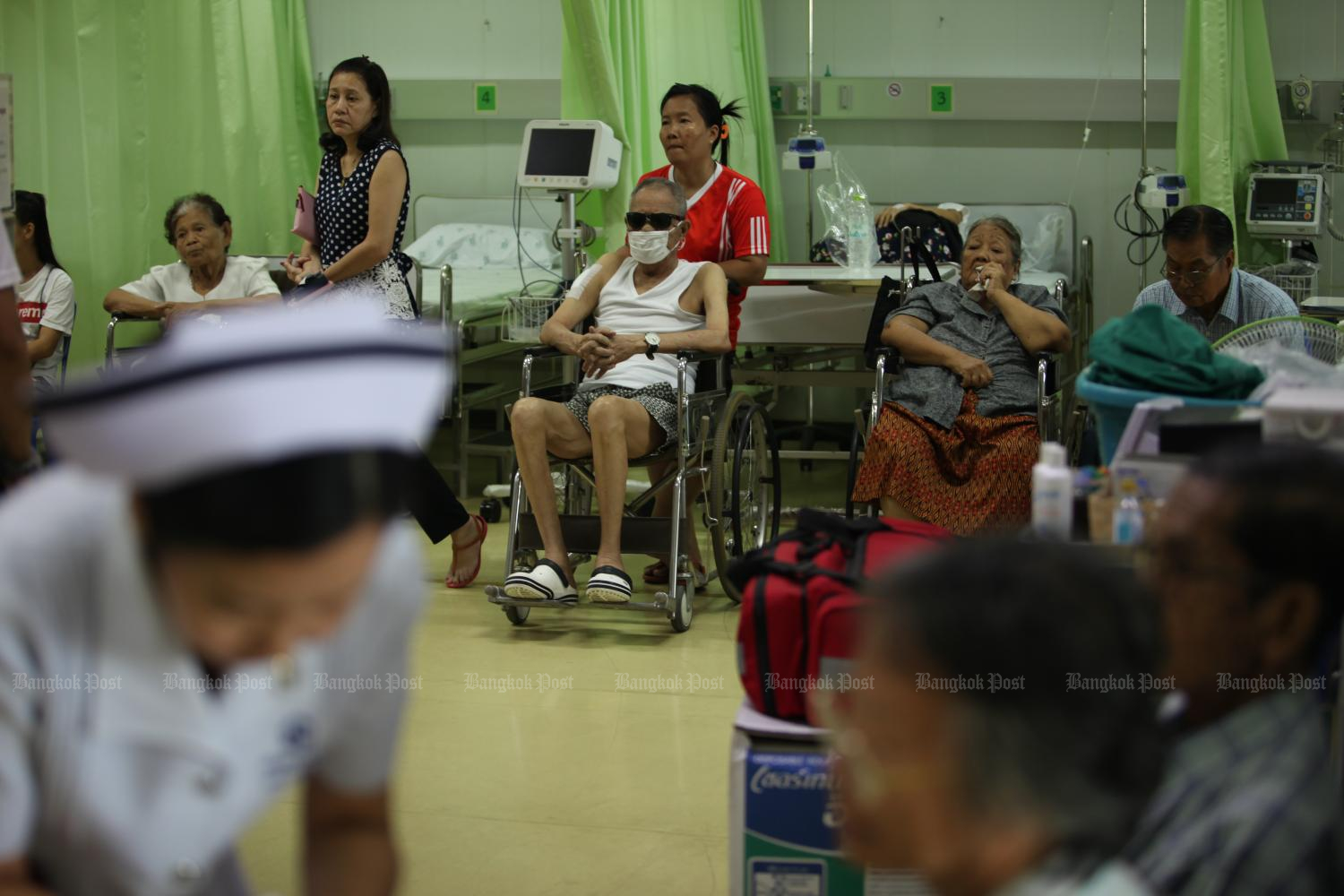 greying population: The number of elderly is projected to reach 20.5 million, or 32% of the entire population, by 2040.

Before the hospital was built, people living in the area had to travel a long way to the nearest state-run hospital.

The land donors’ wish finally came true when MR Sukhumband launched a plan to build a medical facility to treat the elderly in Bangkok, in an area known for fresh air and coastal views.

That was when Bang Khunthian Geriatric Hospital was built on Bang Khunthian-Chai Thale Road, about 10 kilometres off Rama II Road. The hospital began operating its outpatient ward in 2012.

After seven years in operation, the hospital is getting a major upgrade with the construction of new buildings that will enable the hospital to take care of more patients. 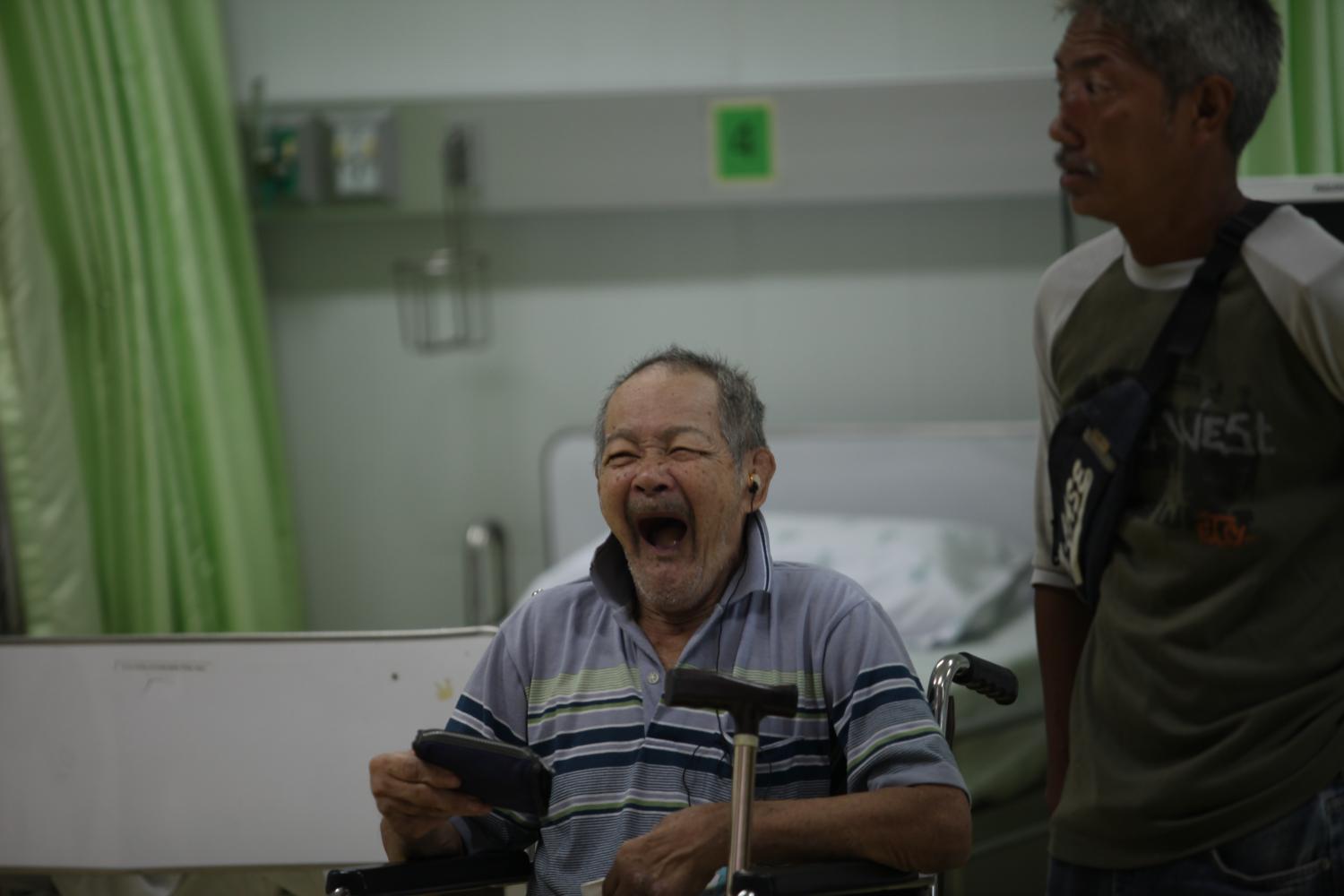 generation gap: The hospital will help the BMA cope with a likely increase in the elderly, with Thailand already fitting the category of an ‘ageing society’.

The construction is li

kely to be complete by the end of this month, and the buildings are expected to be opened by April of next year, according to Thaweesak Lertprapan, deputy governor of Bangkok.

“And after the construction is complete, medical equipment will be procured next, and more medical personnel will be brought in to operate the facilities.”

The BMA has ambitious plans for this facility. It aims to provide medical care and services at the same standard as those offered at leading private-run hospitals, while charging patients the same range of low rates as state-run hospitals.

The hospital will be start its first phase of operation, capable of filling up to 100 beds for in-patients

The hospital will enter its first phase of operation with the capability of filling up to 100 beds, when it opens in April.

The hospital can currently handle up to 800 patients per day. 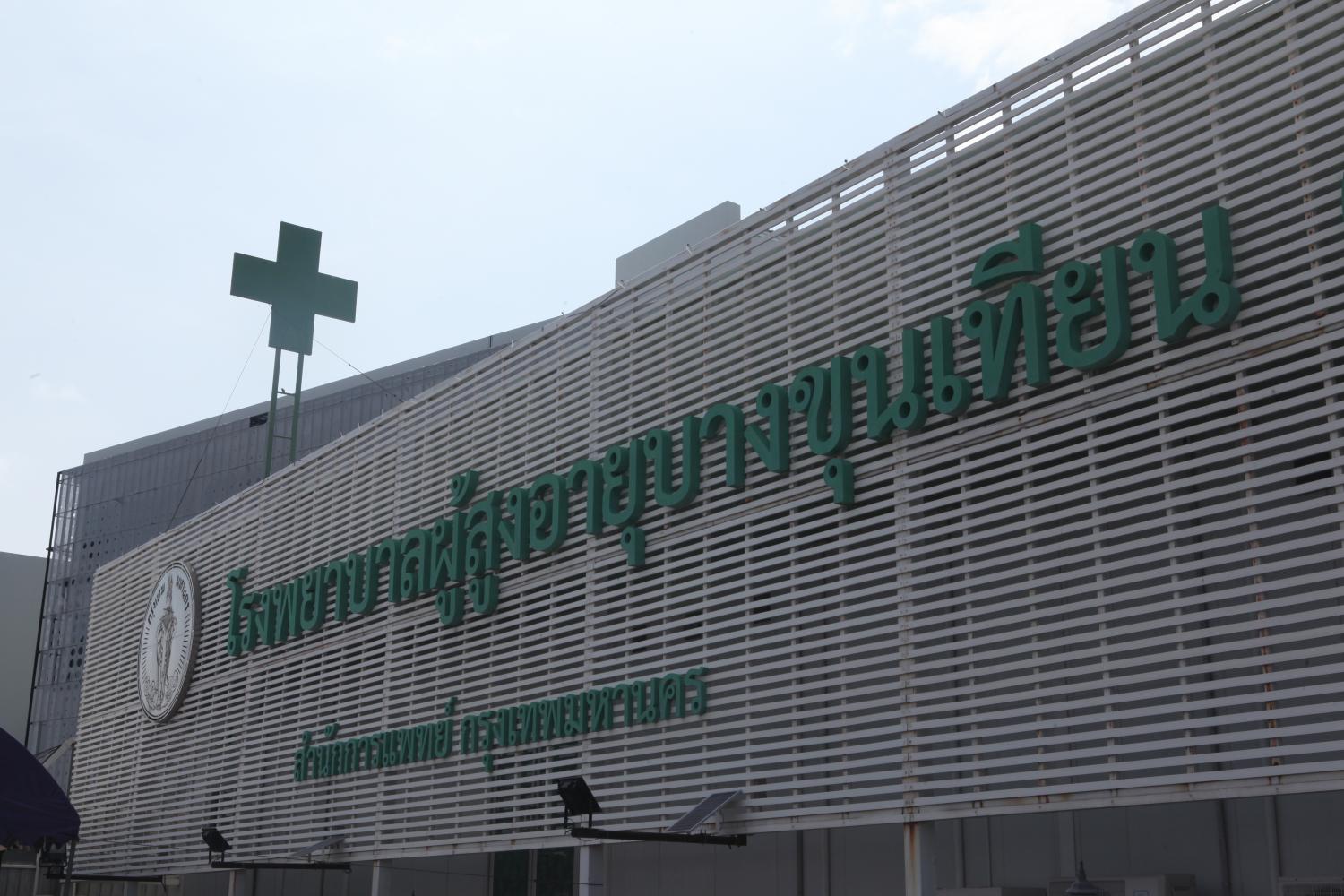 Niche in the market: Bang Khunthian Geriatric Hospital opened in 2012 for out-patients offering special clinics such as acupuncture and diabetes.

The hospital will not only serve residents of Bang Khunthian district, but also Bang Bon, Chom Thong, Rat Burana and some parts of the neighbouring Samut Prakan and Samut Sakhon provinces.

One building will be 70,000 sq m and will serve as an intensive care unit and geriatric centre, according to Umporn Kiatpanabhikul, the director of the hospital.

Another, which will be 17,000 sq m, will be built with a floating garden with a panoramic view of the Bang Khunthian mangrove forest.

This building and others will be connected to another building by a walkway.

The rooftop of the second building will be decorated as a park for both patients and their relatives.

However, a planned cluster of eight resort-like one-storey buildings next to the coastal area is the highlight of the project.

Two other buildings will be designation as accommodation for the hospital personnel, who will be in the non-patient zone. “Some have said these buildings look more like a resort,” Dr Umporn said.

“Each of them will be equipped with appliances that are normally found in a standard VIP room at a private-run hospital, plus a view of the surrounding mangrove forest,” she said.

The hospital is basically created with a universal design concept and to make it appear more like home — with shared facilities for doing activities together, doing physical exercise and chilling out, said Dr Umporn.

“More importantly, we will be offering standard VIP services as normally offered at private-run hospitals while charging patients the rates of state-run hospitals,” she said. It is unclear how much the new facilities are likely to boost demand. 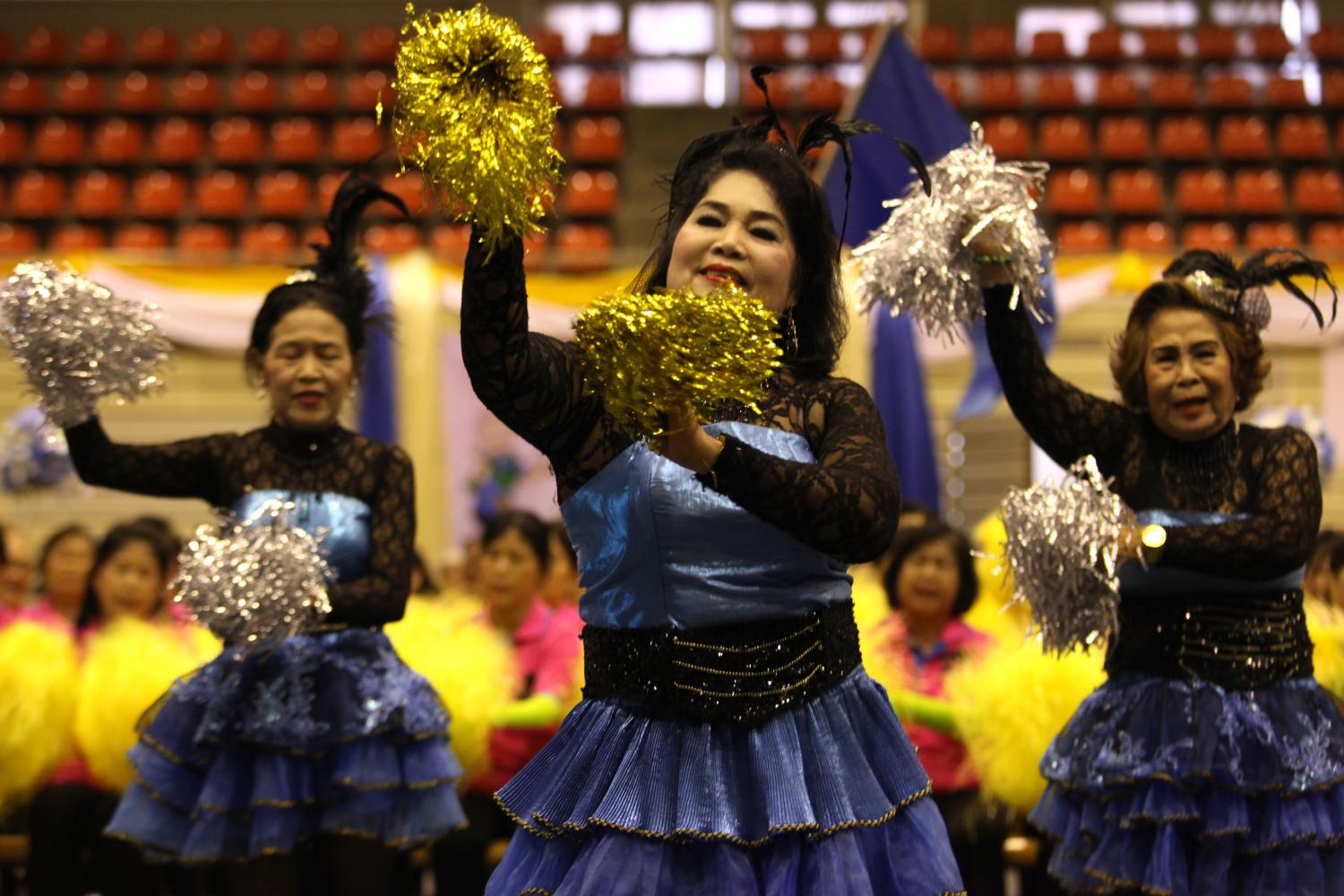 The project illustrates the Thai authorities’ attempt to deal with a growing “grey society”. Thailand has become an ageing society, with 17% of the population aged 70 and older, according to the Public Health Ministry. By the end of this year, Thailand is expected to see the number of elderly people surpassing the number of children for the first time.

Within the next three years, Thailand is expected to experience a total aging demographic shift, with up to 20% of the population, or about 4.6 million being classified he said.

In Bangkok alone, the number of elderly residents will rise to 2 to 3 million in the very near future.

Bangkok has a population of about 10 million and the BMA has a total of nine hospitals under its jurisdiction, which altogether have a total in-patient ward capacity of 1,845 beds, serving 3.8 million patients annually, or one-third of city residents and dwellers. 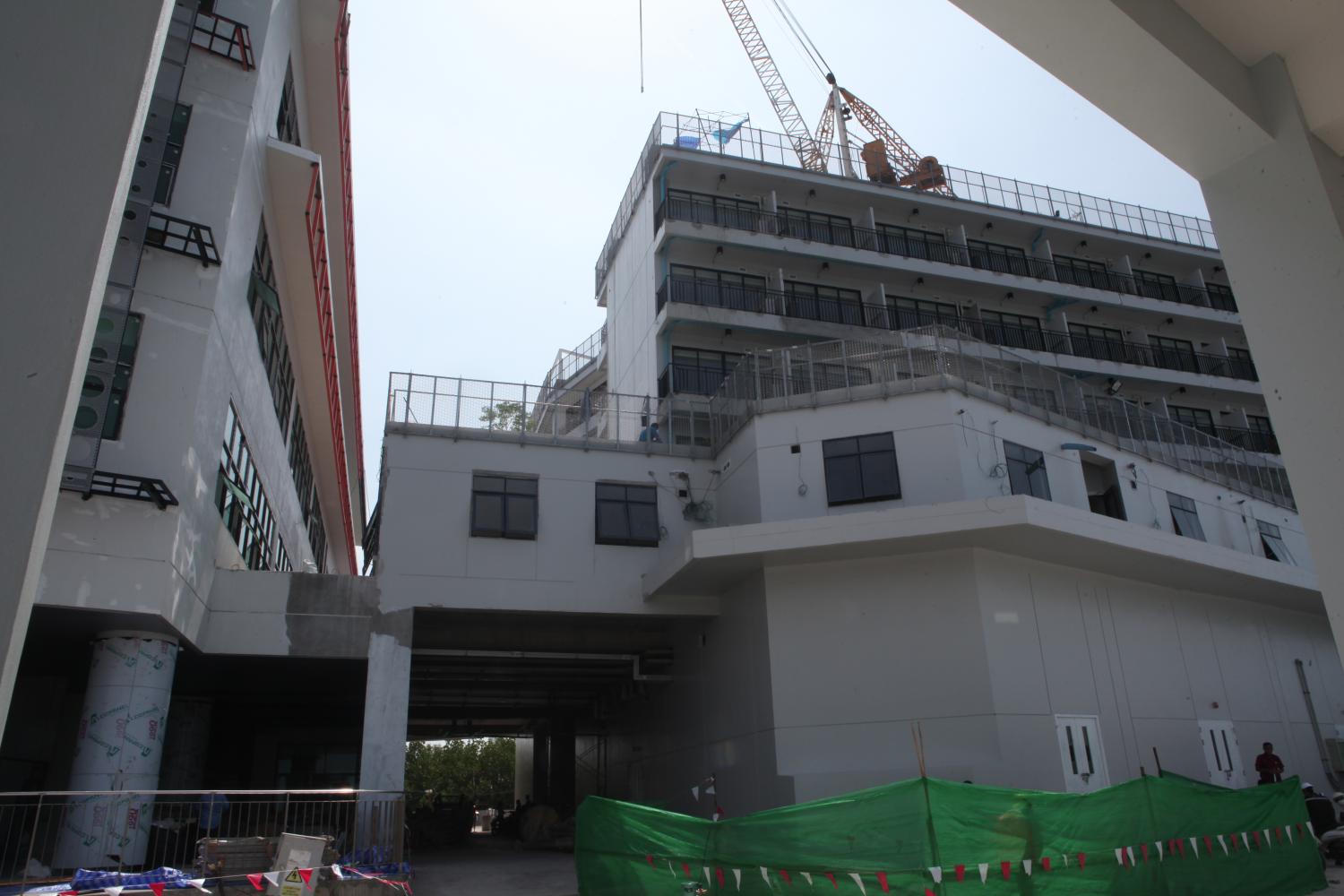 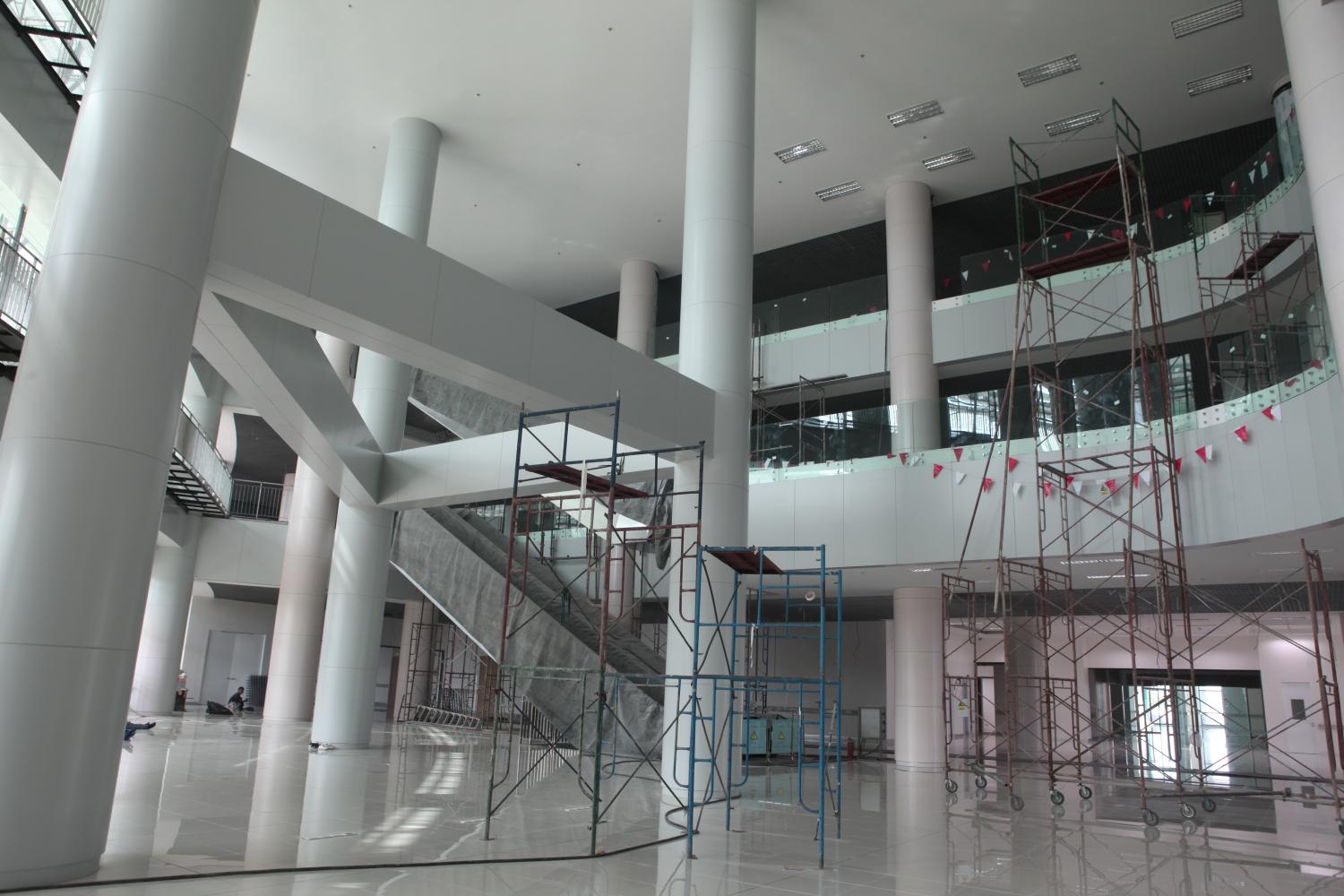