People wearing masks board a train in Taipei on Feb 10, 2020. Taiwan’s lack of World Health Organisation membership has been an increasingly sore point for the island amid the virus outbreak.PHOTO: EPA-EFE

Presidential Spokesperson Salvador Panelo, in a statement, said members of the Inter-Agency Task Force for the Management of Emerging Infectious Disease (IATF) agreed to lift the ban because measures to prevent the coronavirus disease 2019 (Covid-19) are already being strictly implemented.

“The Palace confirms that the Inter-Agency Task Force for the Management of Emerging Infectious Disease (IATF) has resolved to lift the travel restrictions imposed upon Taiwan, effective immediately,” Panelo said. 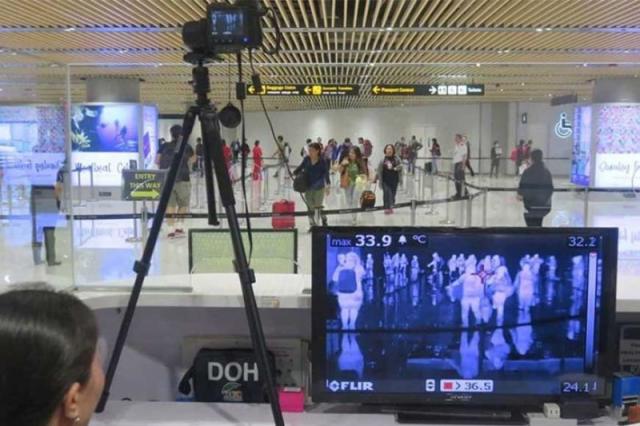 THE ban on travel to and from Taiwan has been lifted, Malacañang confirmed Friday, Feb. 14, 2020.

“Travel may now be made by any national to Taiwan from the Philippines and vice versa,” he added.

Panelo said the task force is also evaluating the travel restrictions imposed on Macau, a special administrative region of China.

The task force is awaiting the submission of the protocols being observed by the Macau government to prevent potential carriers of coronavirus from entering and departing its territory.

These protocols should also enable others to determine the recent travel history of any traveler exiting Macau’s borders.

The Office of the President, however, said the task force will regularly review any resolution related to travel restrictions in connection with the Covid-19.

Travel restrictions are still in place for China and its special administrative regions, Hong Kong and Macau.

Meanwhile, more and more patients under investigation (PUIs) have tested negative for the novel coronavirus, the Department of Health (DOH) announced Friday.

DOH Assistant Secretary Maria Rosario Vergeire said as of 12 p.m. Friday, 386 PUIs had tested negative for the novel coronavirus. The DOH is awaiting test results for 66 other PUIs.

Vergeire said 191 PUIs remain admitted and isolated in hospitals in the country, while 260 were already discharged, including the two confirmed cases of the new virus who already tested negative after admission in hospitals.

“We are glad that most of our patients under investigation tested negative for the 2019-nCoV (novel coronavirus),” Vergeire said in a press briefing Friday.

She announced though that one new PUI died due to cardiovascular attack, not Covid-19.

She said the new mortality, a 71-year-old Filipino from Ilocos who had a history of travel to Taiwan, manifested cough when he was admitted in a hospital in La Union.

“His condition deteriorated though and he also had chronic pulmonary disease, but he tested negative for the 2019-nCoV,” said Vergeire.

Those considered PUIs are the people who recently traveled to mainland China, Macau, Hong Kong or Taiwan and showed signs of the Covid-19 and those who had contact with persons found positive for the 2019-nCoV and also showed symptoms of the disease. They are admitted to hospitals.

On the other hand, persons under monitoring (PUMs) are those who recently traveled to mainland China, Macau, Hong Kong or Taiwan or had contact with persons positive for 2019-nCoV but do not manifest any symptoms of the virus.

The PUMs are put under a 14-day quarantine either at home or in a government facility but may be admitted to a hospital if at any point, during that period, symptoms of the virus are manifested.

Vergeire said the DOH continues to prepare for the possibility of local 2019-nCoV transmission which has been reported in other countries like Singapore, Japan, Thailand, Hong Kong, Germany, France, Vietnam, South Korea and Australia.

As of Feb.14, 277 contacts of the first and second confirmed cases of the Covid-19 in the country have been interviewed. Of the number, 218 completed home quarantine while 15 remained.

Vergeire said only 44 were symptomatic and admitted to hospitals.

On the country’s third confirmed case of Covid-19, the DOH said 255 of her 740 contacts had been traced but only 172 had been interviewed so far. Vergeire said seven contacts who showed symptoms of the virus have been admitted in hospitals and isolated for monitoring.

The DOH has asked the help of the Commission on Elections (Comelec) and Philippine National Police (PNP) in the contact tracing.

“We noted some erroneous and incomplete details in the contacts while some could not be reached anymore. So we sat down with Comelec and PNP-CIDG (Criminal Investigation and Detection Group) to resolve this issue,” Vergeire said in a mix of Tagalog and English.

Meanwhile, a 25-year-old repatriate from Wuhan, China quarantined in New Clark City, Tarlac, was admitted to a hospital due to fever and ear pain. But the patient tested negative for the 2019-nCoV and was brought back to New Clark City to complete the 14-day quarantine.

Vergeire said another repatriate, a 25-year-old female, was also referred to Bataan General Hospital for anxiety-related symptoms, but the DOH could not yet say if the anxiety was due to her quarantine status.

In Cebu, eight Filipinos from Taiwan arrived at the Mactan-Cebu International Airport (MCIA) via Eva Air on Friday morning.

Of the eight passengers, only one was a non-resident of Cebu.

Terence Anthony Bermejo, Bureau of Quarantine-Cebu chief, said repatriated overseas Filipino workers from Taiwan, China, Hong Kong and Macau now have the option to either undergo quarantine in a Cebu facility or go home to their provinces as long as coordination and arrangements are made between the DOH Regional Epidemiology and Surveillance Unit (Resu) 7 and the Resu of their respective local government units.

Earlier, 21 Filipino passengers from Taiwan who were quarantined in an evacuation facility in Barangay Apas, Cebu City, were flown to their hometowns in Mindanao after they constantly complained about the state of the facility.

“It is clear now that those who are not from Cebu will immediately be repatriated to their localities,” said Cebu Gov. Gwendolyn Garcia.

“If they’re not from Cebu and on their way to other local government units like Davao, adto na sila (let them go). Atong dawaton lang ang dire sa Cebu (We will only accept those from Cebu),” Garcia added.

Nine others were moved to a government center in Pinamungajan town, western Cebu which has “better infrastructure and almost a hotel-like accommodation,” according to a Capitol press release.

“The evacuation facility is now vacant. In the first place, it was never identified as a quarantine station. It was only the governor’s temporary arrangement,” explained DOH 7 Director Jaime Bernadas in a phone interview with SunStar Cebu.

The 30 passengers were interned in Barangay Apas because the DOH facility and the Women and Children’s Center were already full.

It remained unclear, as of Friday, what would happen to those Filipinos from Taiwan ordered quarantined before the lifting of the ban on Taiwan.

In Mandaue City, the Covid-19 Incident Management Team recorded 31 PUMs that were home-quarantined for 14 days, five of whom had completed their quarantine period as of Friday.

Mandaue City Health Office chief Rose Marie Tirado said Mandauehanons need not be alarmed by the PUMs because they are just passengers who stopped over in countries affected by the Covid-19 enroute to Cebu and they are not sick.

The Mandaue City Government has allocated P1.5 million from its Disaster Risk Reduction and Management fund for the purchase of surgical masks, eye protection shades, hazmat suits, sanitizers, and a thermal gun for the city’s 27 barangays.

Two Badian town residents who recently flew in from Taiwan expressed dismay over alleged delays in the processing of arriving passengers at the MCIA.

Guiller Escarpe and his niece Meme Jorolan were both looking forward to coming home to Cebu, but their homecoming was far from enjoyable as soon as they arrived on Wednesday, Feb. 12 on board an Eva Air flight from Taiwan.

Jorolan was reportedly labeled as a passenger from Hong Kong, an administrative region of China, instead of her point of origin which was Taiwan.

“I agree with the precautionary measures to prevent the spread of the disease, but they must also uphold basic human rights in the holding area. They must immediately conduct a background check and thoroughly review the entries in the arrival cards,” Escarpe said in a mix of English and Cebuano. (MVI/SunStar Philippines, LMY, WBS, KFD, HBL, WITH PR / RTF)