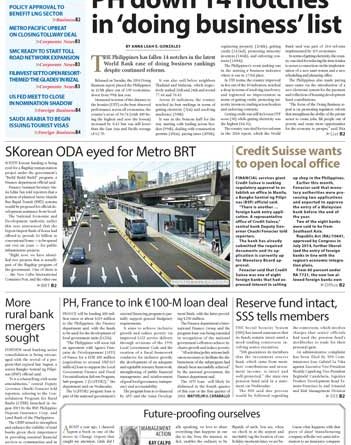 The Philippines has fallen 14 notches in the latest World Bank ease of doing business rankings despite continued reforms.

Released on Tuesday, the 2018 Doing Business report placed the Philippines in 113th place out of 190 economies, down from 99th last year.

Measured in terms of the distance to the frontier (DTF) or the best observed performance across all economies, the country’s score of 58.74 (with 100 being the highest and zero the lowest) increased by 0.42 but was still lower than the East Asia and Pacific average of 62.70.

It was also well below neighbors Thailand and Malaysia, which respectively ranked 26th and 24th and scored 77.44 and 78.43.

Across 10 indicators, the country notched its best rankings in terms of getting electricity (31st) and resolving insolvency (59th).

It was in the bottom half for the rest, starting with trading across borders (99th), dealing with construction permits (101st), paying taxes (105th), registering property (114th), getting credit (142nd), protecting minority investors (146th), and enforcing contracts (149th).

The Philippines’s worst ranking was in the starting a business indicator where it was in 173rd place.

In DTF terms, the country improved in five out of the 10 indicators, notched a drop in terms of resolving insolvency and registered no improvement in terms of getting credit, protecting minority investors, trading across borders and enforcing contracts.

Getting credit was still its lowest DTF score (30) while getting electricity was the highest (84.31).

The country was cited for two reforms in the 2018 report, which the World Bank said was part of 264 reforms implemented by 119 economies.

In terms of getting electricity, the country was cited for reducing the time it takes to secure a connection via the implementation of a new asset system and a new scheduling and planning office.

The Philippines also made paying taxes easier via the introduction of a new electronic system for the payment and collection of housing development fund contributions.

“The focus of the Doing Business report is on promoting regulatory reform that strengthens the ability of the private sector to create jobs, lift people out of poverty and create more opportunities for the economy to prosper,” said Rita Ramalho, acting director of the World Bank’s Global Indicators Group that produces the report.

Ramalho said the “Philippines is making steady progress in carrying out reforms that can make it easier for entrepreneurs to start and operate a business.”

“Moreover, the pace of reforms is faster in many other countries, including in several regional neighbors,” it said.
In a statement, the National Competitiveness Council (NCC) said efforts to accelerate needed reforms would be ramped up.

It also pointed to the “need to pass new legislation and amendments to existing legislation covering a number of important indicators.”

These include amending the Corporation Code to allow single person corporations and eliminate minimum capital requirements that can be retained in other laws.

The NCC said the Securities and Exchange Commission (SEC) would also shorten and automate the incorporation process.

Other reforms being pursued include the approval of the Expanded Anti-Red Tape Act and the mandatory publication of prerequisite documents for licenses and permits.

The Philippine Business Registry, an online system for entrepreneurs to register corporations and single proprietorships and apply for licenses, is also expected to be operational this year.

“This will link the SEC and the Department of Trade and Industry with the Bureau of Internal Revenue, Social Security System, PhilHealth Pag-IBIG and 1,634 local government units (cities and municipalities) nationwide,” the NCC said.

Also being developed is the Philippine Business Data Bank, which will enable the government to verify the identity and licenses of corporations and single proprietorships bidding for government projects, supplies and services.

Other government interventions include the establishment of a credit information corporation, a collateral registry for real estate, machinery and movables, and the upcoming launch of the National Single Window.

The Supreme Court will also be completing a pilot e-courts system in Quezon City, the local government unit covered by the World Bank review.

“Improving ease of doing business in the Philippines is an endeavor that involves the executive, legislative and judicial branches of government,” the NCC said.

“As the Philippines belongs in a region of economies that are clocking in big gains in this area, the Duterte administration commits to strengthen its efforts to introduce reforms and streamline processes to spur this country forward and to improve its global ranking in ease of doing business,” it added. 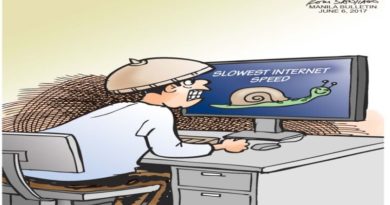