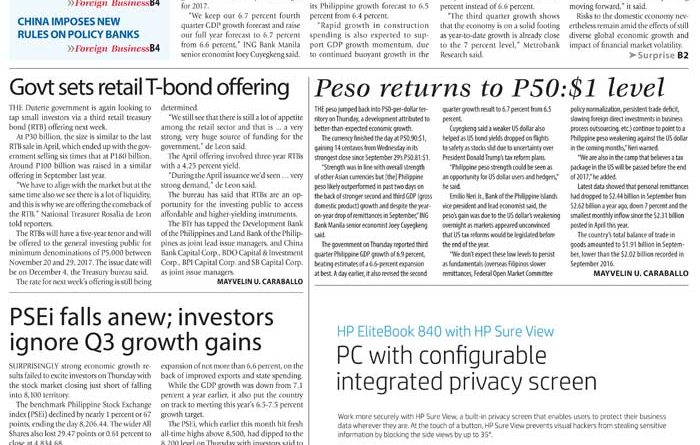 July-September gross domestic product (GDP) growth came in at 6.9 percent, beating estimates of a 6.6-percent expansion at most. It brought year-to-date growth to 6.6 percent, within the government’s 6.5-7.5 percent target for 2017.

Cuyegkeng said accelerated government construction was likely for the fourth quarter of 2017, while mining could continue to benefit from favorable globally prices.

The strong third quarter growth rate means the Philippines economy was on track to recording robust annual growth of over 6 percent for the sixth year in a row, he said.

The research arm of Metropolitan Bank and Trust Co. (Metrobank) also announced an upward revision to its full-year forecast, which is now 6.8 percent instead of 6.6 percent.

“The third quarter growth shows that the economy is on a solid footing as year-to-date growth is already close to the 7 percent level,” Metrobank Research said.

It said growth would be supported by a pick-up in household spending in time for the holiday season, sustained growth in government spending, robust industry and services sectors, and the continued strong expansion of the export sector.

Risks to the domestic economy nevertheless remain amid the effects of still diverse global economic growth and impact of financial market volatility.

Singapore-based DBS, meanwhile, expects full-year growth to hit 6.7 percent, up from its previous forecast of 6.4 percent.

“Going forward, we expect growth in investment and private consumption to remain at around 9 percent and 5.5 percent respectively, once the high base effects from last year’s elections dissipate from fourth quarter onwards,” they said.

They added that as the government aimed to gradually raise infrastructure spending to 5 percent of GDP, all eyes would be on the implementation of the government’s tax reform plans, which are still to be approved by Congress.

Australia’s ANZ Research, for its part, said it saw upside risks to its 2017 GDP growth forecast of 6.5 percent.

“Assuming that infrastructure spending has gained further traction in the fourth quarter, investments and private consumption will likely tick up in the coming months,” ANZ analysts said.

They said the recovery in exports had proven to be deeper than initially expected, providing support to overall economic expansion.

“However, we are increasingly wary of the quality of growth if real estate and credit growth remain the driving forces of activity,” the analysts added. 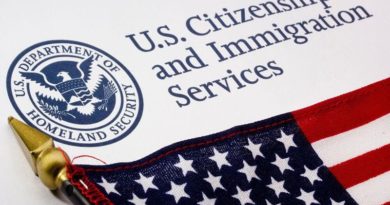 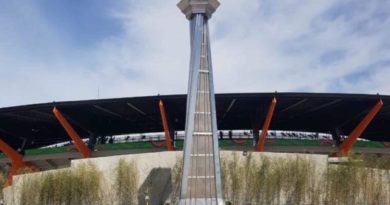 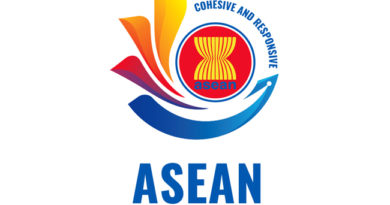