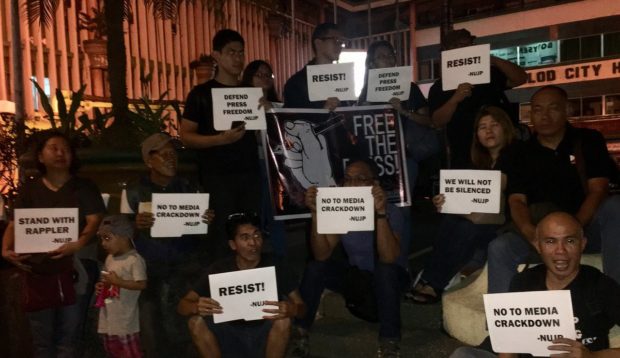 Members of the Bacolod media stand up for press freedom. PHOTO/Carla P. Gomez

BACOLOD CITY – Clad in black, at least 50 journalists, students, priests and members of the academe here gathered in front of the Fountain of Justice at Araneta Street in Bacolod City at 6 p.m. on Friday to stand up for press freedom and to oppose what appears to be the administration’s crackdown on the media.

They also brought streamers that read “All for 1 and 1 for all,” “No to media crackdown,” “Don’t gag the press,” “Stand with Rappler,” and “No to dictatorship.”

The protest organized by the National Union of Journalists of the Philippines-Bacolod chapter was also joined by members of the Negros Press Club.

The ongoing media attacks orchestrated by the Duterte administration are diverting the public from the real issues, like the charter change and the tax reform, Marchel Espina, NUJP-Bacolod chairperson said in a statement.

“In the past days, we’re hounded by the news about our colleagues in the media industry – the revocation of Rappler’s registration by the Securities and Exchange Commission due to its alleged foreign ownership and the shutting down of Interaksyon [news site],” the statement said.

(TV5 Network Inc., the television broadcast arm of telco giant PLDT Inc., has announced that it is closing down its online news portal InterAksyon after seven years of operation as part of cost-cutting efforts. – editors)

“This, in a way, is demoralizing. The move of the government is clear harassment and intimidation to the media. Any attempt to attack the media is also an attack to the freedom of the press,” it added.

According to the statement, the President had publicly illustrated his dislike and distrust to the media, especially those reporting critical stories about the administration.

Mr. Duterte, it added, went as far as calling online news portal, Rappler, a fake news site after it reported the alleged intervention of Secretary Bong Go, Special Assistant to the President, in the P15-billion warship deal.

The statement said the actuation of the President was a “blatant attempt” to undermine the role of the media in uncovering the truth, dismissing it as malicious propaganda thrown at the administration. “But we will not be intimidated. We will not be silenced. We call on our colleagues to remain steadfast in this trying times… Let’s do our jobs and side with the truth. We should stand together and defend our press freedom. After all it’s our duty to remain as watchdogs, and not as lapdogs. We also call on the public to be more vigilant and be more critical,” said the NUJP Bacolod statement.

Negros Press Club president Renato Duran said the officers and members of Negros Press Club stand by Rappler over attempts by a government agency to shut down its operation as an independent media organization.

“While we recognize the state’s responsibility of upholding out Constitution as well as the regulation of all business, we fear that that the act of the Securities and Exchange Commission is a smack against press freedom and freedom of expression. It creates a chilling effect for Philippine media that we will face suppression if we do not bow down to government’s whims and caprices,” he said. 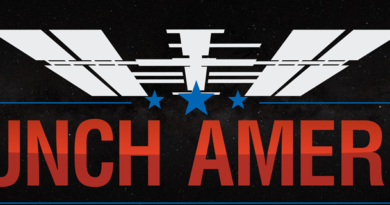 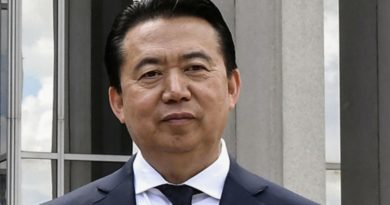 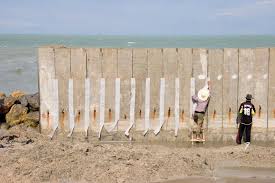