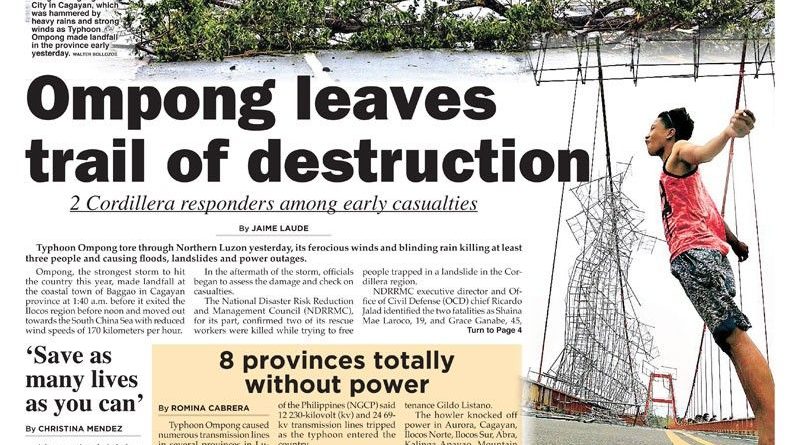 TYPHOON “Ompong” claimed the lives of five people as it tore through northern Luzon on Saturday, authorities said.

The National Disaster Risk Reduction and Management Council (NDRRMC) said two rescuers were killed in Baguio City because of a landslide.

MAD DASH A father carries his sick child as family members transfer to another vehicle, after their ambulance was struck on a highway by toppled electric posts caused by strong winds after Typhoon ‘Ompong’ hit Baggao town in Cagayan province. AFP PHOTO 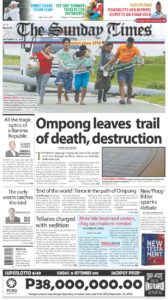 Durana said a girl aged 9 to 12 years old was found floating on Marikina River under Javier Bridge in Pasig City.

An eight-month-old baby drowned in flooding in Albay province and a security guard was crushed to death after a wall crumbled because of strong rains in Caloocan City.

The Philippine Atmospheric, Geophysical and Astronomical Services Administration (Pagasa) said Typhoon Ompong was out of the Luzon landmass and had weakened, moving with winds of 160 kilometer per hour (kph) and gustiness of up to 195 kph.

DISPLACED A family residing in Barangay Malvar rests at an evacuation center in Santiago, Isabela on Saturday, as Typhoon ‘Ompong,’ the most powerful to hit the country this year, tore through northern Luzon. PHOTO BY DJ DIOSINA JR.

Metro Manila was under Signal 1, along with Bataan, Rizal, Cavite, Batangas, Laguna, Lubang Island, and northern Quezon including Polillo Island.

The southwest monsoon however is expected to bring rains to the Visayas, Zamboanga Peninsula, Autonomous Region in Muslim Mindanao, Mimaropa and the Bicol Region.

Ompong was expected to leave the country past  8 p.m. on Saturday, barreling toward densely populated Hong Kong and southern China.

Power out in Cagayan

Roughly four million people were in the path of the destruction the storm slashed through the northern tip of Luzon island.

The extent of the storm’s destruction began to emerge, with reports of rain-soaked hillsides collapsing, torrents of out-of-control floodwaters and people being rescued from inundated homes.

The National Grid Corp. of the Philippines (NGCP) said the provinces of Ilocos Norte, Ilocos Sur, Cagayan, Kalinga Apayao, Abra, Mountain Province, and Nueva Vizcaya “totally have no power” as the grid operator’s 12 230-kilovolt and 24 69-kilovolt transmission lines in northern Luzon tripped due to the weather disturbance.

Cagayan Governor Manuel Mamba pleaded for help from the national government after Typhoon Ompong made landfall in the municipality of Baggao.

Labor Secretary Silvestre Bello 3rd said winds brought by the strongest storm to hit the country this year peeled off the Provincial Capitol’s roof and flattened the province’s rice and corn fields.

There was no electricity in the area and communication through cellphones is scarce.

“We need a lot of help and we want to get assistance from the national government,” Mamba said in a phone interview aired over the ABS-CBN News Channel.

The governor likened Ompong’s onslaught to the damage brought by Typhoon Lawin in 2016 when at least “14,000 houses were completely destroyed.”

The provincial government has set aside a standby fund but it may not be enough to cover all damage, Mamba said.

Some roads in Cordillera provinces were also rendered unpassable because of landslides, according to the Fifth Infantry Division.

He said that most of the blocked roads were in Ifugao and Mountain Province.

Somera said some minor flooding incidents in the region were also reported.

Defense to the rescue

He said these air assets were on standby at Villamor Air Base in Pasay City and could fly any time.
Lorenzana also said troops were available in Cagayan and other affected provinces for rescue missions.

All available military transport assets, he said, could be used by the Department of Social Welfare and Development for the transport of relief goods and other items to communities needing help in the affected provinces.

The Northern Luzon Command head, Lt. Gen. Emmanuel Salamat, was in Tuguegarao, Cagayan managing efforts of the Armed Forces of the Philippines related to “Ompong.”

WITH FRANCIS EARL A. CUETO, AFP, PNA AND JOVE MOYA 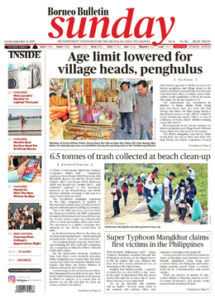 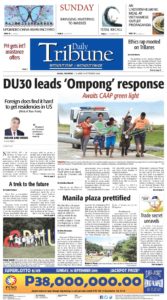 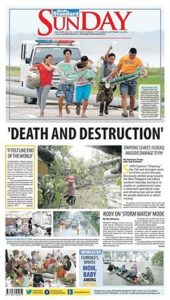 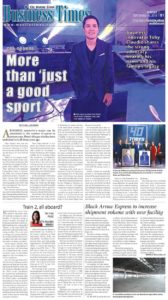 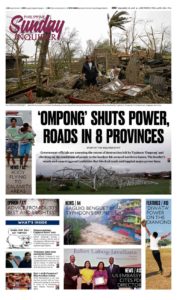 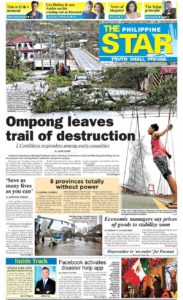 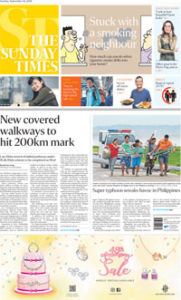 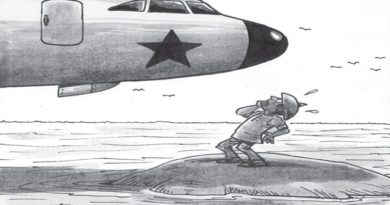 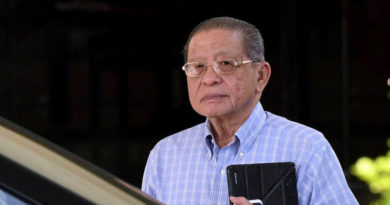 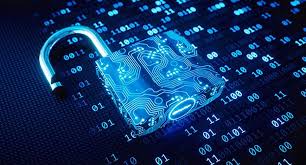