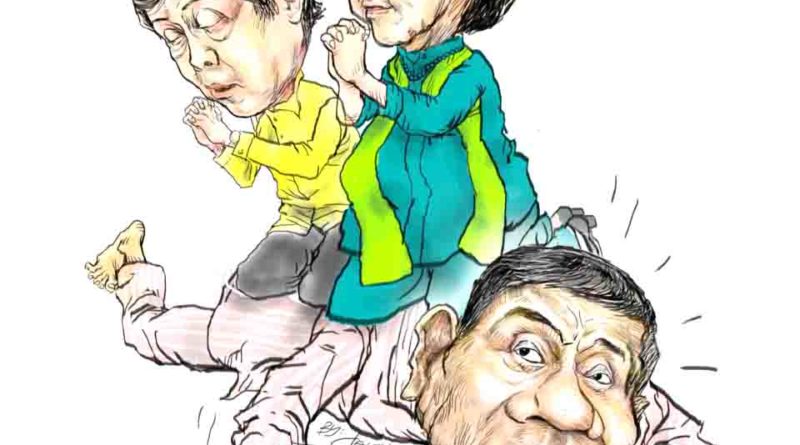 THE solemn oath a president takes when he enters office is to “faithfully and conscientiously fulfill my duties as President of the Philippines, preserve and defend its Constitution, execute its laws, do justice to every man, and consecrate myself to the service of the nation. So help me God.” If and when he commits acts that dishonor and betray this oath, isn’t his “right” to the office nullified, and aren’t the people relieved of their duty to pay their allegiance? Doesn’t he, in fact, become impeachable, and if and when so impeached and convicted, isn’t he removed and barred from holding any office for the rest of his life?

Now, hasn’t President Rodrigo Duterte’s continuing violation of the Constitution effectively produced this lamentable result? Are the voters still obliged to maintain their allegiance, despite his unpunished and unrepented transgressions? Or, are they not obliged to withdraw their loyalty from his government? This is the hardest question to ask, but it needs to be asked, in light of DU30’s latest offense, against the civilian character of our constitutional government.

Not only does the Constitution expressly prohibit the appointment or designation of “any member of the armed forces in the active service in any capacity to a civilian position in the government, including government-owned or -controlled corporations or any of their subsidiaries;” it also proclaims the superiority of civilian authority to the military, and prohibits members of the military from directly or indirectly engaging in any partisan political activity, except to vote.

Retired Army Gen. Rey Leonardo Guerrero, the new Customs commissioner, is correct in saying he is a civilian now and cannot be accused of being part of the bureau’s “militarization.” But this has nothing to do with the appointment or designation of any military officer to any civilian position in the Bureau of Customs, when DU30’s unlawful order is carried out. They do not lose their military ranks.

As reported by The Manila Times, the military takeover would be in effect “until the government finds out how to deal with the rampant corruption.” It quoted the President as saying: “We cannot just move on because we want to be lawfully correct, so we have to take things slowly. But with this kind of games they are playing, dirty games, I am forced now to ask the Armed Forces to take over.

“They will be replaced, all of them, by military men. It will be a takeover of the Armed Forces in the matter of operating in the meantime, while we are sorting out how to effectively meet the challenges of corruption in this country.”

These words have not been withdrawn. Presidential spokesman and legal counsel Salvador Panelo tried to explain the motive of his master’s decision by saying that DU30 was personally “disgusted” with the corruption at the BoC, “that’s why he wants the troops there.” It was naive and childish to suggest that a burning temper, rather than the law or right reason, had prompted the President to order the “militarization.” Marcos used to caution, prudently, never make an important decision when angry.

What says the AFP?

The military spokesman tried to assure the public by saying the military takeover would be temporary only. This has nothing to do with its constitutionality. What does the AFP high command think of it? This is what we would like to hear. It puts to the test the officers corps’ solemn declaration that they will not follow any illegal order from any source.

Corruption happens when customs officers and employees become smugglers instead, and claim political protection from presidential relatives and friends. The first casualty is the law. But what Malacañang is saying now is that following the law will not cure corruption, so the President has to adopt a measure that flagrantly violates the fundamental law. It is a perverse rendering of a fundamental precept and principle of governance, which no one expects to hear from any school of public administration and governance anywhere.

The Constitution does not have any self-operating mechanism to check or curb constitutional excesses. It must rely on the proper political and judicial organs of the state and an alert officialdom and citizenry. If those who depend on the Constitution for their protection and wellbeing do not protect the Constitution themselves, no one else will. It is, therefore, our duty as citizens to defend the Constitution from the casual and unmitigated overreach of PDU30. We cannot allow him to trifle with the Constitution indefinitely; it must stop.

In the beginning, DU30 took over the three branches of government, simply by claiming the right to accuse and punish everyone, except himself and his kin and friends. By having alleged drug suspects killed without due process, on the basis of a mere “drug list” of unknown probity and origin, he spread terror everywhere, until even members of the educated and evangelized class started applauding what they should rightfully reject. He disabled the operating system of the Constitution, without a whimper from those who should have reacted most vehemently.

In quick succession, we saw the following:

— The President, rather than the elected members of the two houses of Congress, naming two Mindanao politicians as Senate President and Speaker of the House of Representatives, as well as other key officials and committee heads, and turning the Congress into a rubber stamp;

— Malacañang officials trying to bar the House from exercising its “power of the purse” and introducing amendments to the proposed national budget;

— The President setting aside a ruling by the international arbitral tribunal at the Hague upholding Philippine rights over certain disputed maritime areas in the Spratlys;

— The House committee on justice throwing out a verified impeachment complaint against DU30, filed by the Magdalo party-list Rep. Gary Alejano, among others, after a token committee hearing;

— The President creating a so-called consultative constitutional committee and aggressively pushing his federalism project despite the fact that the Constitution bars him from proposing any constitutional amendment, and his own economic managers have warned him federalism would destroy the economy;

— The President attacking then Supreme Court Chief Justice Maria Lourdes Sereno as his “personal enemy” and asking Congress to impeach and remove her. After he was told he did not have the 16 Senate votes needed to convict and remove Sereno in an impeachment trial, he turned to the Supreme Court and asked Sereno’s colleagues to remove her through a “quo warranto” proceeding authored by Solicitor General Jose Calida.

This was where we saw DU30’s authoritarian character shoot up and the majesty of the Supreme Court and the rule of law crumble in the gutter.

Under the Constitution, SC justices are impeachable officers. Like the President, the Vice President, members of the constitutional commissions and the Ombudsman, they may be removed only upon death, permanent disability, resignation, or impeachment for, and conviction of, culpable violation of the Constitution, treason, bribery, graft and corruption, other high crimes, or betrayal of public trust. The House of Representatives shall have the exclusive power to initiate all impeachment cases, and the Senate the sole power to try and decide all such cases.

But because DU30 wanted Sereno out, the Supreme Court justices gave due course to Calida’s quo warranto petition and required Sereno to show by “what warrant” she was occupying the position to which she was appointed in 2012 by then President B. S. Aquino 3rd. Her alleged failure to file correct statements of assets, liabilities and net worth, which was part of the impeachment complaint filed against her by lawyer Lorenzo Gadon in the House, became the basis of the quo warranto petition, and the justices declaring her appointment null and void ab initio.

There was no forum to which the ruling could be appealed, so Sereno became history. Three blatant breaches of the Constitution are evident here. First, the Solicitor General, as the President’s legal arm, had no legal personality to seek to invalidate the President’s appointment of a Chief Justice whose validity it was his mandated duty to defend. Second, under the Constitution, which cannot be overridden by any statute, Sereno could only be removed upon conviction in a Senate impeachment trial. Third, the Supreme Court not only had no jurisdiction over an impeachment case, but also had no power to initiate an alternative proceeding to remove a Chief Justice. There was/is not a single word in the Constitution allowing this.

Under the Constitution, the President shall nominate, and with the consent of the Commission on Appointments, appoint the heads of the executive departments, appoint ambassadors, other public ministers and consuls, or officers of the armed forces from the rank of colonel or naval captain, or other officers whose appointments are vested in him by the same Constitution. Justices, however, are subject to a different process. The Judicial and Bar Council recommends, and the President appoints, without need of confirmation.

But having discovered the power of the words “null and void ab initio,” DU30 used the same formula last August to declare an amnesty issued by Aquino 3rd to former Navy lieutenant and now senator Antonio Trillanes 3rd in 2011 with the concurrence of Congress null and void ab initio. No president had sought to nullify a predecessor’s amnesty before. And no one had questioned this particular amnesty before; in fact, not only did Congress concur in it, but the Makati regional trial court also affirmed it by dismissing the cases of rebellion and coup d’etat against Trillianes.

It seems only fair that since Aquino amnestied Trillanes with the concurrence of Congress and a competent court has affirmed it with its own action, DU30’s attempt to void that amnesty, if it has to have any merit, should at least have the same concurrence. Shouldn’t it? Yet, it does not.

Our list of constitutional violations need not grow any longer. Yet DU30’s order of a military takeover threatens to turn upside down our very notion of constitutional government. Let no one doubt the military’s dedication to patriotism and honor—but its real expertise is not “law enforcement” or “fighting corruption,” but “search and destroy.”

Given the express constitutional prohibition, the President has to pull back instead of insisting on what is clearly and absolutely forbidden. For him to insist on it is to risk being suspected not so much of wanting to use naked military force to cure corruption, as he claims, as of wanting to use the beehive of corruption at the BoC to tempt the military the way the Tempter tempted the Lord in the desert, and make them more vulnerable and docile to any possible move to fully militarize the entire government. 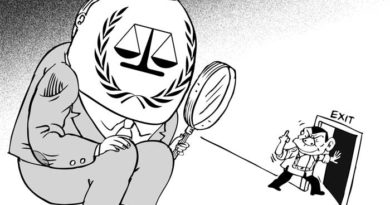 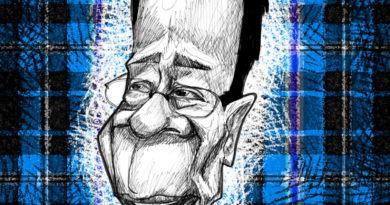 COLUMN: NEWSSTAND- Should the media cover Panelo? By John Nery