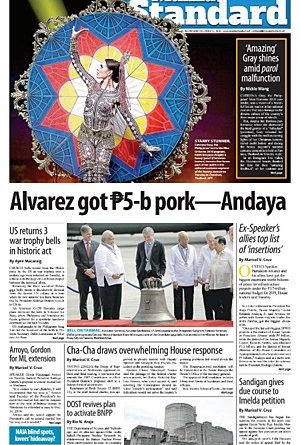 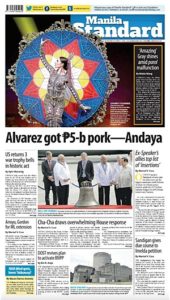 In a letter addressed to President Rodrigo Duterte, House Majority Leader Rolando Andaya, Jr. said Alvarez, together with former majority leader Rodolfo Fariñas, got the biggest allocations.
.
“On top of the list with biggest DPWH projects is the district of former Speaker Pantaleon Alvarez with P5 billion, while the district of the former Majority Leader, Rodolfo Fariñas, was allocated P3.5 billion, and the district of former chairman of the House Committee on Appropriations Karlo Nograles received P4 billion,
.
” Andaya said at a news conference as he read the letter for submission to President Rodrigo Duterte.Andaya said the DPWH reportedly knew nothing about these inserted amounts.
.
Andaya prepared the letter in response to a Palace statement requiring the Office of the Speaker to explain the proposed infrastructure allocation for 2019 for the second district of Pampanga.
.
At the same time, Speaker Gloria Macapagal Arroyo on Tuesday cried foul over allegations that her district has received huge allocations for infrastructure projects under the 2019 national budget.
.
Responding to questions, Arroyo said she felt maliciously criticized and singled out by Senator Panfilo Lacson, who alleged that her district received the biggest allocation for infrastructure projects at P2.4 billion.
.
Arroyo pointed out that even some congressmen who were not allied with the majority received a bigger share of infrastructure projects, and noted that 60 to 90 lawmakers got bigger allocations than her district.
.
She said previous House leaders had bigger allocations.
.
“If I’m number 90 or number 60 and I am Speaker of the House, I have to explain that?” she added.
.
“Why would I deprive the people of my district? I am only upper-middle-class as far as the allocations are concerned,
.
” Arroyo said, adding that she had no direct hand in preparing the budget for her district.
.
House leaders earlier moved to subpoena the sole proprietor of CT Leoncio Trading and Construction, which was said to have bagged billions in contracts involving projects of congressmen in 2017.
.
Andaya made the motion in plenary session in light of the House’s initiative to take Budget Secretary Benjamin Diokno to a question hour to shed light on billions of pesos in unused funds in the 2016 and 2017 national budgets.
.
In the question hour, Diokno denied his links to CT Leoncio.
.
“I’m known for my integrity, your honor. I have no relative like that. It’s not my job to allocate resources.
.
To implement projects is not my job.
.
That’s the concern of the line departments,” Diokno responded to House Minority Leader Danilo Suarez.
.
Suarez had posed several questions to Diokno about Sorsogon Vice Governor Esther Hamor, wife of Casiguran Mayor Edwin Hamor.Reports have it that Diokno’s daughter, Charlotte Justine, is married to Romeo “Jojo” Sicat Jr., who happens to be the son of Esther Hamor from her first marriage to a certain Gerardo Sicat.Sources told Manila Standard the Hamors are “very close” to  CT Leoncio Construction—owned by Consolacion Leoncio—who, according to Suarez, cornered “trillions” of pesos in projects despite just being a sole proprietorship based in Bulacan.Diokno admitted the affinity, but claimed the issues being raised by Suarez are not discussed in family gatherings.
.
READ: House leader vents ire on Diokno over pork insertions in new budget
.

Andaya, in a privilege speech Monday, questioned the grant of at least 30 projects worth billions of pesos to CT Leoncio.Andaya presented a certification from the Securities and Exchange Commission stating that the firm was not a corporation, as well as a contract showing that Leoncio has the sole proprietorship of the company..

.
These contracts were not only with the Department of Public Works and Highways, but also with the Bureau of Internal Revenue, the Department of Transportation, the Philippine Ports Authority, the Philippine Fisheries Development Authority and the Department of Labor and Employment, Andaya said.Lacson on Tuesday urged the Ombudsman to investigate the possible insertion of pork in the 2019 budget, despite denials by House members and Budget Secretary Benjamin Diokno.
.
READ: Budget chief faces Congress’ Question Hour
.
“With exposes on pork in the proposed P3.7-trillion budget for 2019 now coming out left and right, it may be time for new Ombudsman Samuel Martires to step into the picture,” Lacson said.
.

He also called Andaya an “unlikely ally” for exposing how one contractor bagged 30 flood control projects.

.
On Dec. 5, Lacson said a congressman got at least P1.9 billion in congressional insertions while a congresswoman—Arroyo—got P2.4 billion.
.
But Andaya said Lacson was wrong.“In the 2019 GAB approved by the House of Representatives recently, the Speaker’s district currently ranked 60th and the office if the majority leader ranked 110th in terms of appropriations for the Department of Public Works and Highways [DPWH],” Andaya said in his letter.Andaya said the Arroyo-led House leadership merely implemented “equal opportunity for growth and the same access to services” to all congressional districts.
.
“As one who has participated in the budget process from both the executive and the legislative side, the Speaker has instructed us to treat the draft national budget as a rigorously crafted instrument which gives residents in all districts equal opportunity for growth and the same access to services,” Andaya’s letter read.
.
“However, close scrutiny of the 2019 budget during House deliberation showed huge funding spikes in other favored districts the provenance of which leadership of the DPWH has reportedly known nothing about.
.
An initial check with the National Economic and Development Authority [NEDA] likewise revealed that many were not recommended by the Regional Development Councils.
.
“I am certain that if this fine print if the budget was brought to the President’s attention by his Budget officials, he would not have countenanced it as it would violate his oft-repeated promise to the people of equal progress for all.
.
“What the present House leadership did was in a manner compliant with all laws, to purge the budget of development favoritism and as much as possible apportion next year’s spending to all districts in a fair manner,” the letter read.Alvarez and Fariñas denied the allegations.
.
“I do not know with him [Andaya]. I have not attended a single budget hearing. I have not even seen the [National Expenditure Program],” Alvarez said in a text message.
.
“Congress has nothing to do in the preparation of the NEP.
.
Its solely an executive function,” Alvarez added.Fariñas said: “I do not know the allocation for my district but everything listed therein was in the NEP submitted by the President.
.
I left the Majority two days after the SONA [State of the Nation Address] when I joined the Minority, and there is no way I could have added anything to it.
.
I did not attend any budget hearing since then as I was on medical leave starting Sep. 15 when I suffered injuries from Typhoon “Ompong.”
.
“But I will not be surprised if the amount is accurate since my district has one of the longest national highways in the country from Laoag to the boundary of Cagayan province.
.
The bridge alone for theLaoag-Bacarra bypass road is about P1 billion [multi-year allocations].” Fariñas added.
.
READ: Other solons got bigger budget than Arroyo­—Andaya 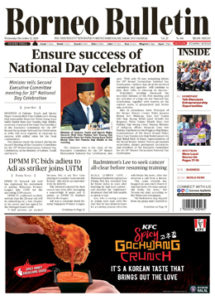 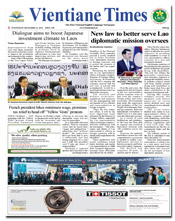 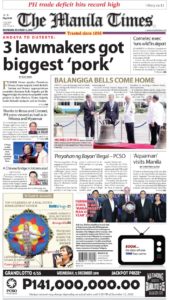 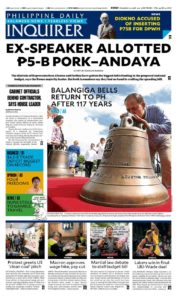 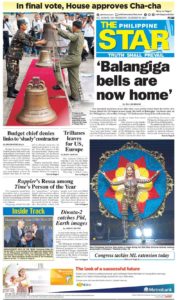 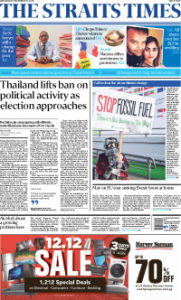 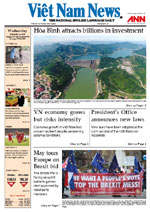 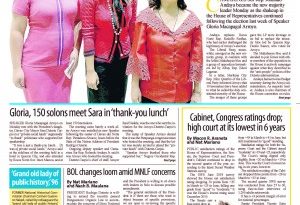 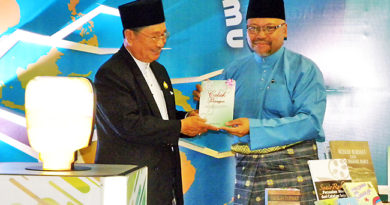 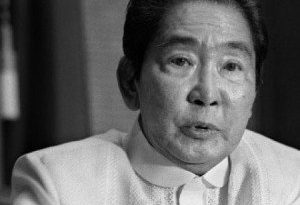