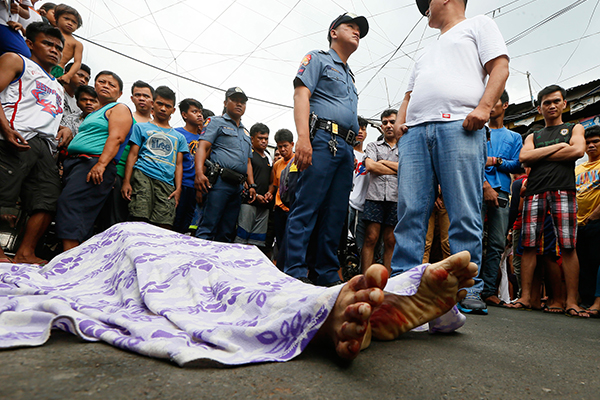 LAST Monday, unidentified assailants ambushed the car of senatorial candidate Glenn Chong in Cainta, Rizal, killing his security aide and friend for 11 years, Richard Yambe Santillan, 45, who was driving Chong’s car (a Fortuner) at the time. As far as Chong, Richard’s 73-year-old mother, his 46-year-old widow, his two grownup sons, and his circle of close friends knew, he was killed in an apparent “rubout,” completely innocent and unarmed.

As far as Chong, Richard’s 73-year-old mother, his 46-year-old widow, his two grownup sons, and his circle of close friends knew, he was killed in an apparent “rubout,” completely innocent and unarmed.

Killed with him was an unnamed young woman, who had reportedly agreed to help in his Christmas gift-giving activity for the poor Grade One schoolchildren in Antipolo and Cavite—something he had been doing the last three years, according to his two sons and his widow Jeanette.

I happen to know the deceased. And I have to reject the story I am hearing from the police.

A loyal aide
I came to know Richard from the time Glenn Chong began his advocacy for clean and honest elections, and started joining our “get-togethers” at the National Transformation Council to discuss political, constitutional and societal change. He was a well-mannered young man who blended impeccably with Glenn’s group but always knew his proper place.

At the Cosmopolitan Memorial parlor in Pasig on Wednesday evening, I spoke to his family, and they all remembered him as an ideal son, a loving husband and doting father and a caring Christian who tried to do whatever little thing he could for others.

He was of course devoted to Glenn Chong, a CPA-lawyer and former congressman of Biliran, known for his fight against the irregularities committed by Smartmatic, the Venezuelan election provider, in the last few elections since 2010. Richard shared Glenn’s passion, including his decision to run for the Senate this time.

This happened on November 26 when Rose Imperial of Naga City withdrew as a candidate of the Katipunan ng Demokratikong Pilipino, and Glenn substituted for her. He was in Naga City when Richard drove his car to Cainta and took some 30 gunshot wounds from his unidentified assailants.

On Monday, Chong waited for Richard to pick him up at the airport when he landed from Naga, and was a tad disappointed when the latter failed to show up without any explanation. Nothing like this had ever happened before. Glenn had to carry his own bags and take a metered vehicle home. Tired and feeling low, he decided to rest as soon as he got home. He learned of what happened to Richard only the next morning.

Chong’s initial response
I tried calling Glenn on Tuesday as soon as I heard about the incident, but when I finally got through, I could hardly make sense of him. He had obviously been crying, and had difficulty speaking. When we finally spoke at the wake on Wednesday, he said his first impulse was to renounce his candidacy, but finally he decided his candidacy was perhaps one of the things Richard had precisely died for.

Police claimed Richard drove past their checkpoint, ignoring their orders for him to stop; they allegedly gave chase and caught up with him after a while. Then they allegedly exchanged gunfire. “Nanlaban,” as the police normally say before killing drug suspects, without due process. They produced a .45 caliber pistol, a 38 caliber, a 9-mm, and a fragmentation grenade as weapons allegedly found inside the victim’s car, along with a sachet of crystal meth (shabu).

This was contradicted by other sources who claimed that a motorcycle-riding cop, closing in from behind, fired at the car, forcing Richard to accelerate in order to avoid getting hit, only to end in a torrent of gunfire at the end of the line. Chong said Richard could not have owned any of the weapons and the meth attributed to him; he said the only weapon Richard owned was a .45 caliber Glock pistol, which he had given him and which Richard carried whenever they moved around, together. But since they were not together this time, Richard must have left the gun at home; and it wasn’t inside the car.

Planted evidence
Obviously, the weapons “in the car” were “planted,” Chong surmised.

As to the police claim that the victim “fought back” (“nanlaban”), this was contradicted and totally excluded by the physical evidence. Aside from the fact that Richard was totally unarmed, the glass windows of his car were riddled with bullets but remained shut; no way he could have shot back, even if he had all those guns with him. In fact, if it was true that he was armed with a grenade, there was no way he could have used it, even if he wanted to do so, unless at least one window was open.

The police will have to come up with a more believable account of what happened. And Malacañang, which has a penchant for talking about the most inconsequential things, will have to speak. This incident is not as small and insignificant as the local police may have thought it was; it cannot be so easily shoved under the rug.

More than that, Chong is not an anti-Duterte critic. His newly minted political grouping (KDP) is known to be sympathetic, if not totally supportive, of President Rodrigo Duterte. DU30 will have to say something about the incident, and make sure those responsible are adequately punished. It will also have to be ascertained whether the fatality was the actual target, or he was simply mistaken for the senatorial candidate, a “collateral damage.”

First assault on a Senate bet
In any case, this was the first violent incident directly or indirectly involving a senatorial candidate in this season. We are no strangers to violence during elections. But it is almost an unwritten rule that even in a violence-prone area like Mindanao, the killings never rise to the level of candidates for national positions. Chong is the first senatorial candidate to be subjected to this violent attack before the official campaign period begins on February 12.

Some of Chong’s friends are so concerned that they have offered to lend him their armored cars or to “armor” all his cars for his personal protection. But assuming his life is indeed threatened, our problem is not only to keep him alive, but rather to keep our democracy alive. We could “bullet-proof” all our candidates for national office, but if the otherwise peaceful and purely constitutional competition for power is compromised by unlawful means, we’ll have no way of keeping our democracy alive and safe.

Dangerous crap
This is the part where we have to talk about the President’s son, Paulo Duterte. A few days ago, he posted on Facebook a list of corporations and individuals who are supposedly involved in an “Oust Duterte Movement.” My name was listed under the heading “CBCP/Opus Dei,” along with nine active and retired bishops, including the late Carmelite Bishop Julio Xavier Labayen, who died before DU30 became president. It also included the journalist and Pagcor Director Carmen “Chit” Pedrosa, a devoted DU30 follower and widow, who was mistakenly referred to as the wife of Don Ramon Pedrosa, her late husband’s brother, who is hardly critical of DU30.

I exposed this nonsense in a couple of columns many months ago, and called on Malacañang to make sure this bogus material did not contaminate the intelligence reporting of the police or the military. At the time, I was being interviewed by Ms. Veronica Pedrosa of Al Jazeera, and I asked her to show a copy of the fake dossier to her mother Chit Pedrosa, who has been rewarded a fat Pagcor directorship for her unfailing loyalty to DU30. I assumed she’s one of the few rare souls who could talk to DU30, so I thought she could ask him to remove this nonsense from the files of the PNP.

I assumed she was able to do this when I heard nothing more about the fake story. But a few days ago, “Pulong” DU30 decided to be on the news and posted the false and completely inane story on FB.

The harm is done
I am told that “Pulong,” whose name continues to be mentioned in connection with non-palatable stories at the Bureau of Customs, got a real talking-to from his father. But the harm has been done, and some people are afraid. They do not think DU30 would order the death or destruction of any of those listed in the imaginary oust-DU30 movement. But his kingdom is one of darkness and is full of little elves who will want to gain the king’s applause and attention by clearing his august surroundings of its least troublesome sights.

In 1170, all King Henry 2nd of England had to say was, “Will no one rid me of this meddlesome priest?” And the murder of Thomas Becket, Archbishop of Canterbury, followed. 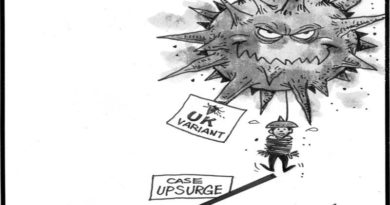 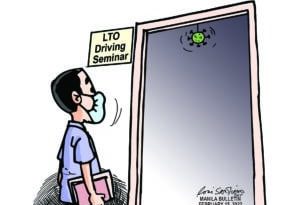