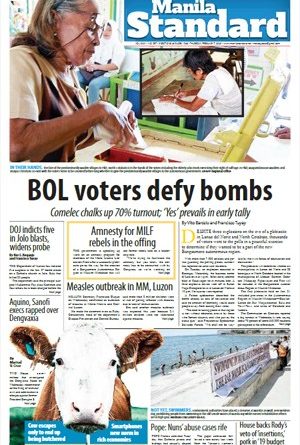 Despite three explosions on the eve of a plebiscite in Lanao del Norte and North Cotabato, thousands of voters went to the polls in a peaceful exercise to determine if they wanted to be a part of the new Bangsamoro autonomous region.

With more than 7,000 soldiers and police guarding the polling places, authorities reported no untoward incidents.On Tuesday, an explosion occurred in Barangay Maranding, the business center of Lala town at 4 p.m., followed by another blast in Kauswagan town minutes later.

A third explosive device went off in Sultan Naga Dimaporo town in Lanao del Norte at 10 p.m. No injuries were reported.A Palace spokesman described the bomb attacks as acts of cowardice and said no amount of bombing would scare people away from casting their votes.“The road to lasting peace in that region is not without obstacles strewn by those who foment disunity and who purvey

the status quo,” said. Presidential Spokesman Salvador Panelo. “We shall not be waylaid by the twin forces of obstruction and destruction.”The plebiscite will determine whether six municipalities in Lanao del Norte and 28 barangays in North Cotabato located in the municipalities of Aleosan, Carmen, Cabacan, Midsayap, Pigkawayan, and Pikit will be included in the Bangsamoro

Autonomous Region in Muslim Mindanao.The first plebiscite held on Jan. 21 included provinces in the Autonomous Region in Muslim Mindanao—Basilan, Lanao del Sur, Maguindanao, Sulu and Tawi-Tawi, and cities of Cotabato and Isabela.The Commission on Elections reported a big turnout in Wednesday’s vote, saying about 70 percent of some 640,000 residents participated in the referendum.

As of 5:40 p.m., the unofficial count showed the “yes” votes ahead with 31,698, against the “no” votes at 9,712.The official results would be released four days after the plebiscite, Comelec spokesman James Jimenez said.The ARMM and Cotabato City voted “yes” to ratify the Bangsamoro Organic Law while Isabela City opted not to join the BARMM, which replaces the ARMM.

The BOL seeks to give the Moro people the basic legal tools to chart their own destiny within the country’s constitutional framework.Police said there were no violent incidents in the 6,803 polling centers covering the two provinces.Philippine National Police spokesman Sr. Supt. Bernard Banac said the Tuesday bombings failed to keep voters from the polling places.The blasts on Tuesday prompted the military and police to tighten security at checkpoints.Lala, Kauswagan, and Sultan Naga Dimaporo were not part of the six municipalities participating in Wednesday’s plebiscite.Banac said the explosions were under investigation.

“The PNP security operations in Lanao del Norte and North Cotabato are well in place to make the plebiscite today safe, peaceful and orderly,” Banac said in a message sent to reporters just before the plebiscite.A total of 7,312 security forces from the PNP (5,573) and Armed Forces of the Philippines (1,739) were deployed on the ground for the second BOL plebiscite.AFP public affairs office chief Col. Noel Detoyato said the military took “extra precautionary measures” to secure the second BOL plebiscite. With PNA 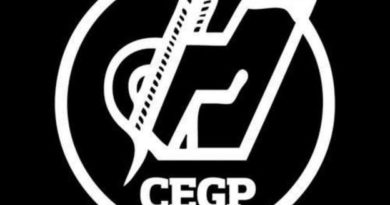 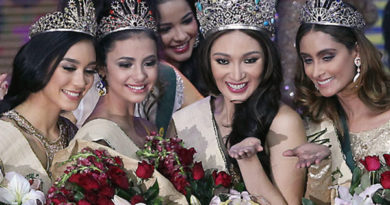