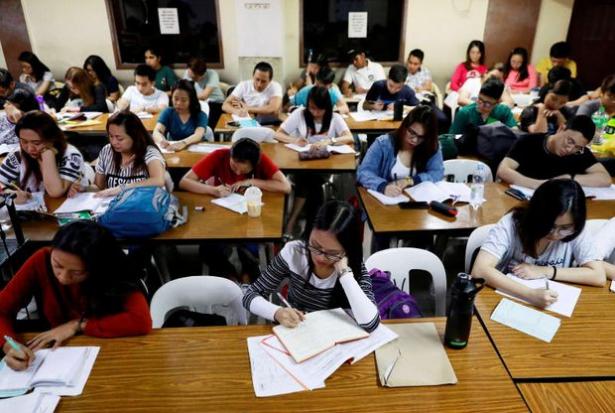 Filipino workers, including nurses applying to work in United Kingdom, attend a lecture at a review center for the International English Language Testing System or IELTS in Manila, Philippines, April 2, 2019. (Reuters photo)

MANILA: Bracing for life after Brexit, British hospitals badly need more nurses like Filipino Jobie Escalona, but she twice flunked a mandatory English language test that asked her to write up the merits of immigration and computer education in school.

Fed up, she was ready to give up on Britain and try Canada, one of several other countries short of nurses, until her father persuaded her to take the test a third time.

“I was already losing hope,” she told Reuters. Finally, in January last year, she passed, having at last got a subject she felt comfortable writing about in the tough written section of the test.

Asked to compare team and individual sports, Escalona had little trouble: “I was able to relate to it because I am a swimmer.”

But her tortuous experience doesn’t bode well for Britain’s chances of adequately filling alarming staffing gaps in its healthcare services.

With Brexit looming, the supply of nurses from European Union countries has almost dried up, with lots going home. And of the many foreign nationalities employed in Britain, Filipinos made up the largest number, with 10,719, according to a parliamentary paper.

As of June last year, 16% of nursing jobs in hospitals and community health services were held by foreigners – nearly a quarter of whom were Filipinos.

Britain is already facing a shortage of 40,000 nurses, and once it leaves the EU, if it ever happens, the gap could widen to 50,000, enough to staff more than 40 small to medium-sized hospitals, according to a report commissioned by the Cavendish Coalition, a group of health and social care organisations.

OUT OF THEIR COMFORT ZONE

The staffing crisis is increasing Britain’s dependency on hiring from low-cost countries like India and the Philippines, where English is widely spoken, yet the language test has proved to be a major obstacle. 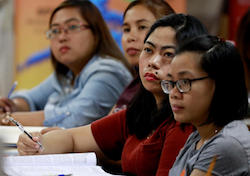 Filipino workers, including nurses applying to work in United Kingdom, attend a lecture at a review center for the International English Language Testing System or IELTS in Manila, Philippines, April 2, 2019. (Reuters photo)

It has only filled a quarter of them.

“It is not because of the lack of applications, but the English test,” said Lilibeth Villas, documentation officer at the firm. “We have applicants who were interviewed in 2015, but they have not passed the test yet.”

Run by the British Council, IDP Education and Cambridge Assessment, the International English Language Test System (IELTS) gauges applicants’ ability to speak, listen, read and write, and is used by employers around the world.

Questions in the academic written section asks candidates to write short essays on diverse subjects. Examples given on the IELTS website included interpreting graphs on changes in radio and television audiences, and gender variations between full and part-time students, and discussing the pros and cons of nuclear technology and of regulating car ownership.

Many candidates clearly find the weighty topics too daunting.

Febin Cyriac, a business development manager at Envertiz Consultancy, a British healthcare recruitment firm that specialises in bringing in nurses from overseas, started a petition in change.org in 2014 that asked UK regulators to relax their IELTS scores.

Working as a nurse himself, Cyriac said there are a good number of Indian or Filipino nurses with many years of experience working in Britain, but who are only working as assistant nurses in the National Health Service (NHS) and nursing homes.

“IELTS is the only barrier for them to practice as a nurse in the UK,” said Cyriac, himself a nurse working in Britain.

Still, the number of Filipinos in the NHS has risen by almost a third in the last two years, according to British government figures.

Late last year, the pass mark for the writing section was lowered, but there are no immediate plans to make further changes to the test standards, said Andrea Sutcliffe, Nursing and Midwifery Council (NMC) Chief Executive and Registrar.

“We will continue to carefully monitor the impact of the recent changes. This change is part of a wider review of our overseas registration processes aimed at making it more straightforward and user-friendly for people with the right skills and knowledge to join our register in a timely way”, Sutcliffe said.

There is an Occupational English Test (OET), more suited to medical professionals, that foreign nurses can take. If they pass that test they would still have to sit the IELTS, but they would be eligible for a lower pass mark. The OET is more expensive, however, making it unattractive for low paid nurses.

A London-based recruitment agency visited Manila recently to find nurses for Cambridge University, East Surrey and Royal Cornwall Hospitals, while there have also been recent hiring drives for hospital trusts in Oxford, Hull and Dudley.

“There are a lot of markets for our Filipino nurses,” Olalia said, adding that it was understandable if they took jobs in places where the requirements were easier to fulfil.

Filipino nurses who were recruited in the 1990s did not have to take the language tests, yet they are still in the NHS and providing good service, said Reydeluz Conferido, who was until recently the labour attache to the Philippines embassy in London.

While there, Conferido called on British officials to review the requirements placed on overseas nurses to see whether they were serving the correct purpose or creating an artificial barrier.

“If you really want these nurses, you would do something about your standards,” he said. 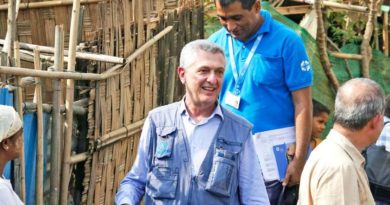 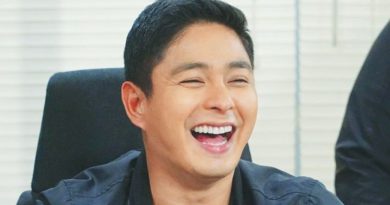 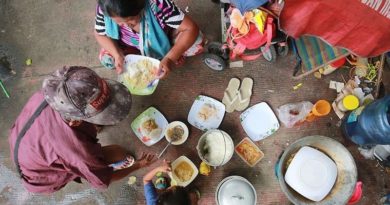