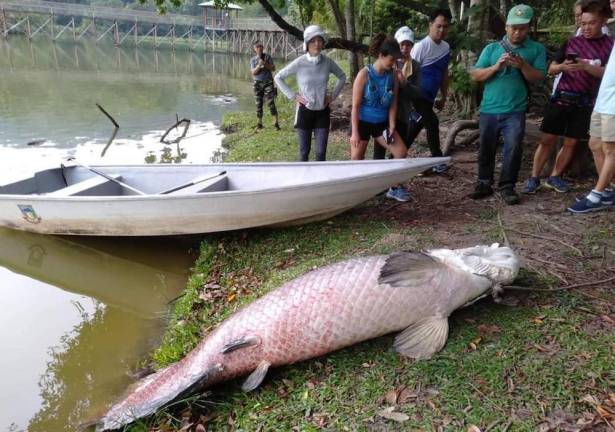 The dead arapaima found in the lake at the Tun Fuad Stephens Park, Kota Kinabalu.

KOTA KINABALU: A dead six-foot long arapaima found in the lake at Tun Fuad Stephens Park here could have been released there by its previous owner.

The fish is not native to Sabah and is not among those reared by City Hall in the lake, according to Mayor Datuk Nordin Siman.

Commenting on the arapaima found in the lake on Monday morning, Nordin said the fish’s previous owner could have released it in the Bukit Padang lake because he or she was no longer able to keep it.

Photos of the dead fish, which is native to the Amazon River in South America made its rounds on social media yesterday. Its scientific name is arapaima gigas and the fish can grow up to more than seven feet in length.

People were posing next to the fish after it was brought out of the lake. It is believed to weigh about 100kg.

Nordin said that the discovery was made by Cyrill, a personnel of the Park Landscape Department while he was going about his duties.

He saw something floating near the bank of the lake and assumed that it was rubbish.

Upon checking he was surprised to see that it was the carcass of a big fish. With the help of a few colleagues, they got the fish ashore.

Arapaima gigas, also known as pirarucu, is a species of arapaima native to the basin of the Amazon River. Once believed to be the sole species in the genus, it is among the largest freshwater fish. The species is an obligate air-breather and needs to come to the surface regularly to gulp air.

Scientific name: Arapaima gigas
Kingdom: Animalia
Family: Arapaimidae
Higher classification: Arapaima
Phylum: Chordata
Did you know: The arapaima (also called the pirarucu) is one of the largest freshwater fish in the world; it grows up to a length of about 9.8 feet (3 meters). ipfactly.com

All photographs, news, editorials, opinions, information, data, others have been taken from the Internet..aseanews.net | aseanew
It's only fair to share... 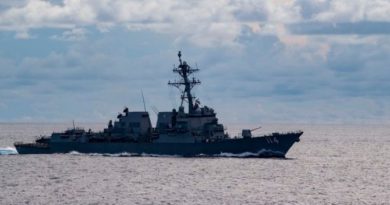 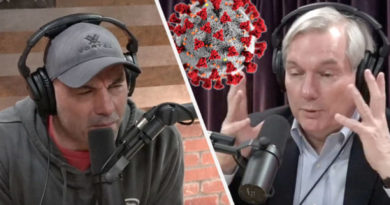 Covid-19 is not a biochemical weapon, epidemiologist tells Joe Rogan 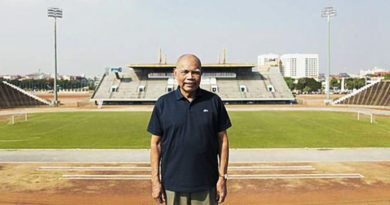