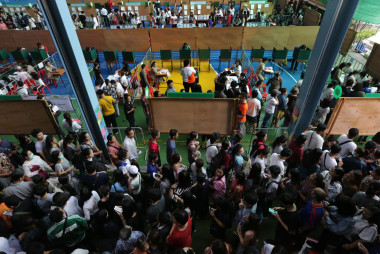 The year in politics

2019 has been a year of intense political developments highlighted by the March 24 election, the first since the 2014 coup, the subsequent transition to an elected government that has been ridiculed for remaining under the shadow of the coup makers, the army chief’s remarks on his first political talk show which reverberated across the political spectrum, the stripping of the MP status of Future Forward Party leader Thanathorn Jungroongruangkit dubbed the ‘brightest rising star’ of politics and the demise of Thai Raksa Chart Party after it added Princess Ubolratana’s name in the prime ministerial candidates hat.

Exercising their ballot: People turn up to cast their vote during advance voting ahead of the March 24 general election at Matthayom Ban Bang Kapi School in Bang Kapi district.

1. After being put off six times when it was first promised by junta leader Prime Minister Prayut Chan-o-cha, the much awaited general election was finally held on March 24 under a complex new electoral system with 500 seats up for grabs.

The poll was held under a new rule in which a single ballot was used and votes cast for constituency candidates were used to calculate party-list seats to be distributed among qualified parties.

Under the new regulation, if the number of constituency seats won by a party exceeded the estimated share of overall House seats allowed, it would not get party-list seats.

The election rules put forth by the Constitution Drafting Committee under an organic law on the election of MPs were heavily criticised and did exactly what political observers said they would — favour medium-sized and small parties.

It turned out that 27 political parties won, with 13 micro parties receiving one party-list seat each.

While the lead opposition Pheu Thai Party managed to capture the lion’s share of seats — 136 in total — political observers said it was far fewer than the 200 House seats it was expected to win.

The Palang Pracharath Party (PPRP), which nominated Gen Prayut as its prime ministerial candidate, did better than expected, winning 117 seats from the constituency and party-list systems.

The party was expected to capture only around 60 to 80 seats. 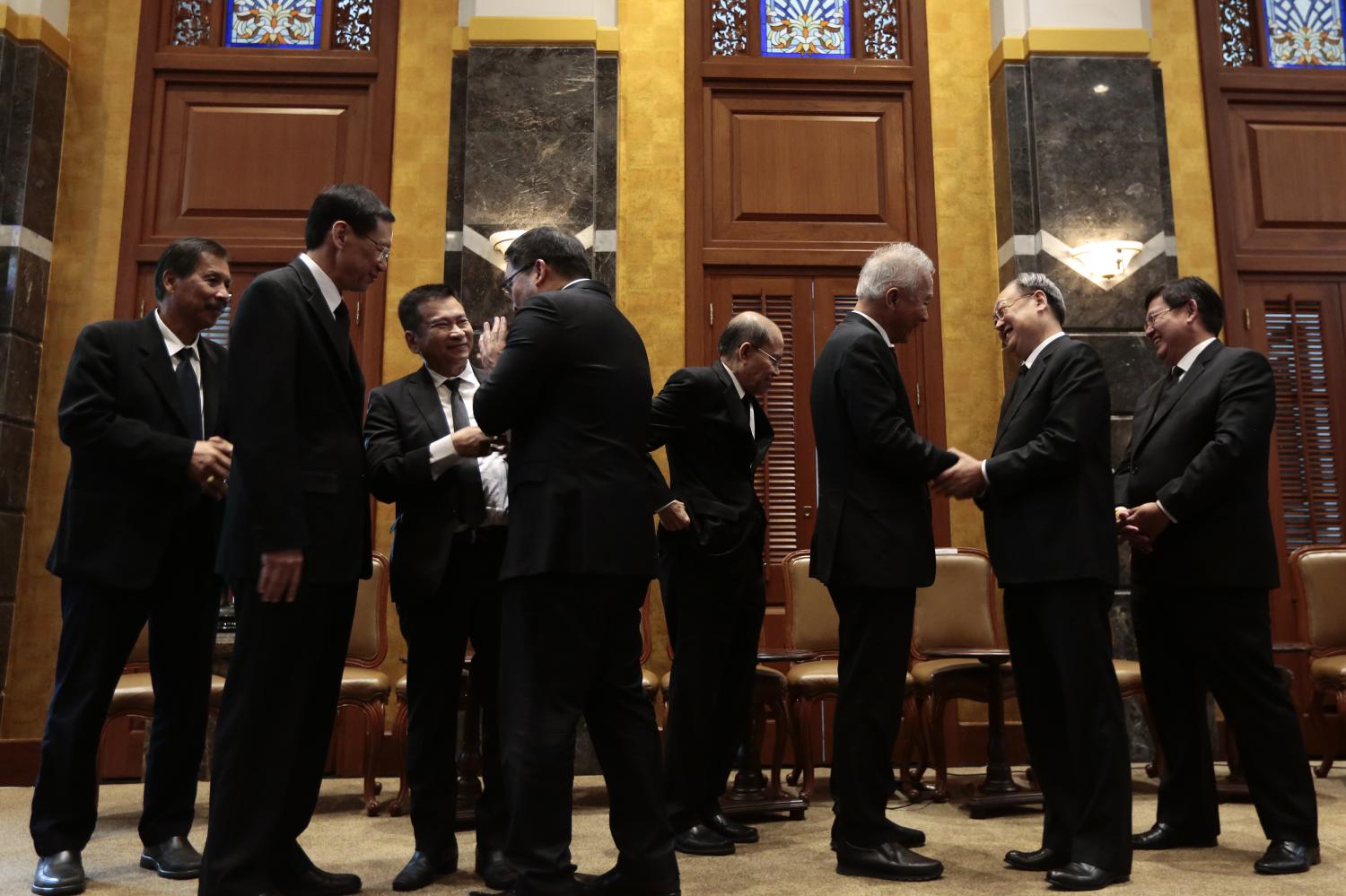 The poll served up some surprises, with the Future Forward Party springing the biggest shock by grabbing 81 seats mostly from the party-list system. This new outfit was expected to win no more than 30 to 40 seats.

The Democrat Party was the biggest loser. It was expected to retain 100 seats, yet it captured no more than 53, none of which were in Bangkok, its political stronghold. Abhisit Vejjajiva stepped down as party leader after the shocking defeat.

A few days after the poll, the Pheu Thai announced it was joining up with allies to form a coalition government with a total of 255 seats — a move that proved to be premature.

A coalition of 19 parties

2.A hundred and eight days after the general election, PPRP eventually formed a razor-thin coalition government with 254 seats and 19 political parties under its wing.

The PPRP faced some tough demands from its potential partners, including the 11 small parties that were the first to back the PPRP-led alliance. The Democrat and Bhumjaithai parties teamed up as a “political duo” to use their combined 103 MPs in a move to increase their bargaining power for coveted cabinet seats.

The Democrat Party drove a hard bargain by putting forward its patriarch, veteran politician Chuan Leekpai, for the House Speaker’s post — a seat usually held by a core coalition party.

Backed by PPRP deputy leader and list-MP Nataphol Teepsuwan, Mr Chuan defeated Pheu Thai’s Sompong Amornwiwat in a 258-235 vote, with one abstention. To political observers, this move signalled the deal to form a PPRP-led coalition had been sealed.

After the appointment of the chief of the legislative branch came the prime ministerial vote, which was a contest between PPRP’s Gen Prayut and Future Forward Party (FFP) leader Thanathorn Juangroongruangkit.

However, Gen Prayut was a shoo-in with the support of 250 appointed senators, winning 500 votes in the joint House-Senate voting session. Mr Thanathorn only got 244 votes with Mr Chuan, Senate Speaker Pornpetch Wichitcholachai, and Bhumjaithai MP for Si Sa Ket Siripong Angkasakulkiat abstaining.

Mr Siripong claimed he abstained because he wanted to keep his campaign promise that he would back party leader Anutin Charnvirakul for the post.

Ahead of the vote, Democrat leader Abhisit Vejjajiva stepped down as party list-MP.

Clearly he couldn’t bring himself to vote for Gen Prayut to remain as PM after failing to talk his party out of joining the PPRP-led alliance and working instead as an independent opposition party.

3.It is not often that people witness the spectacle of an army chief wielding a microphone on stage to lash out at political characters accused of undermining national security. 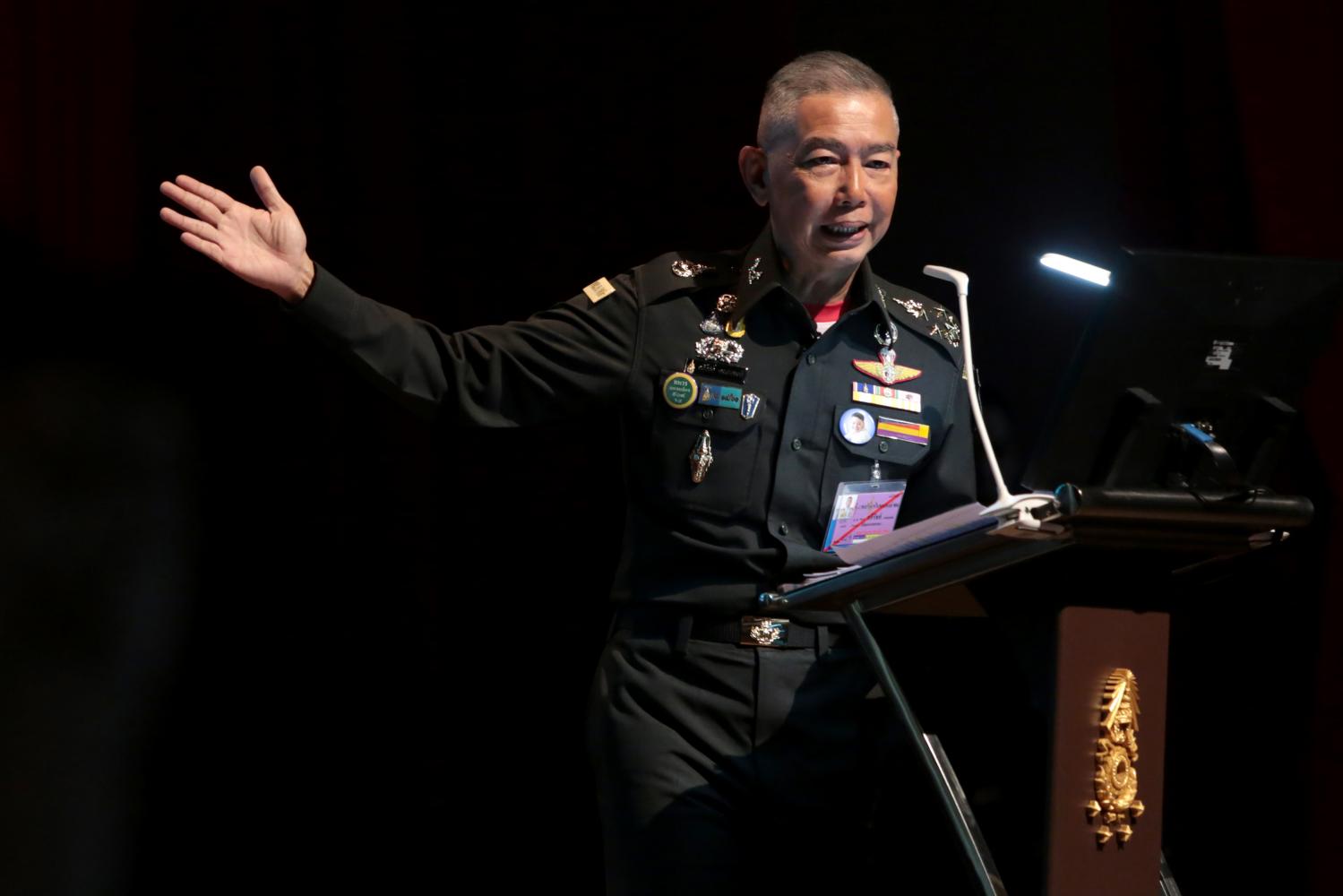 Airing views: Army chief Apirat Kongsompong takes to the podium to speak on threats to national security on Oct 11.

On Oct 11, Army commander-in-chief Apirat Kongsompong held the audience rapt when he addressed a lecture attended by some 500 people from public and state sectors.

The subject of the lecture was loosely translated as “Our Land in the Contest of National Security”.

For about an hour, Gen Apirat analysed the state of police and took aim at certain politicians in the so-called “pro-democracy” camp.

The hawkish army chief spoke at length of a new national threat that has manifested in the form of “hybrid warfare”, which apparently combines both conventional and non-conventional warfare strategies.

Non-conventional war tactics involves the employment of an irregular force such as the radicals who were behind random bombings in Bangkok over the past few years.

The conventional strategy, meanwhile, pertains to the alleged propaganda devised by an older generation of people, most in their early 70s, who cling to communism and anti-monarchist ideals.

Gen Apirat insisted this threat was masterminded by foreign-educated elements and academics to drive propagandist campaigns and fake news through social media to further their cause and win support from people, especially the young.

The army commander also lambasted an academic for suggesting that the charter’s Section 1, which stipulates that Thailand is one indivisible kingdom, be amended.

The suggestion was made at a public discussion on changes to the constitution in Pattani on Oct 4, with some opposition leaders attending.

4. FFP leader Thanathorn was stripped of his MP status by the Constitutional Court on Nov 20 in relation to his controversial shareholding in a media organisation.

However, this may not be the end of his predicament. 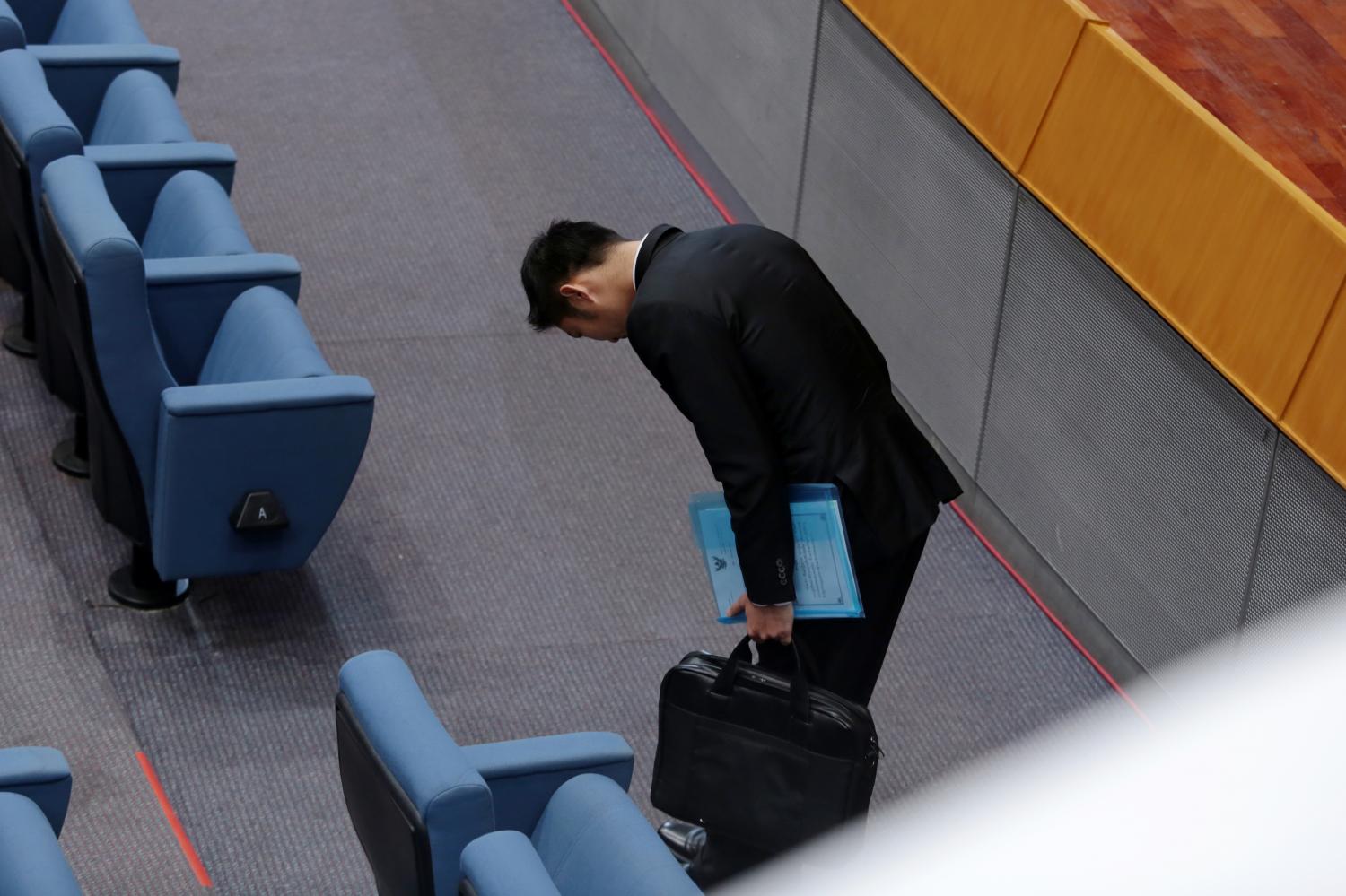 Thrown out: Future Forward Party leader Thanathorn Juangroongruangkit bows as he is asked to leave the first parliament meeting at the TOT auditorium on May 25 due to the Constitutional Court’s suspension of his MP status. The court order stemmed from a media shareholding case against him.

Mr Thanathorn had been dogged by the V-Luck media shareholding saga soon after he was first suspended as MP by the Constitutional Court.

The election law prohibits MP candidates from owning shares in media companies, and Mr Thanathorn reportedly held 675,000 shares in V-Luck Media Co when the FFP submitted the names of its party-list MP candidates to the Election Commission on Feb 6.

The section stipulates that those who apply for MP status despite knowing full well that they do not meet qualification requirements can face a jail term of up to 10 years, a fine of between 20,000 and 200,000 baht, and also may have their voting rights suspended for 20 years.

Pol Col Jarungvith said an inquiry committee investigating the case is expected to include the court’s ruling in its consideration because the ruling states says Mr Thanathorn was not qualified to apply as an election candidate.

While considering the case, the Constitutional Court refused to look at any documents, including those showing the shares had been transferred, which were supplied by Mr Thanathorn in his defence.

The court reasoned that the documents were issued by V-Luck Media and none of them were official documents recorded by the Business Development Department to prove the share transfer.

Mr Thanathorn, dubbed as the brightest rising star of politics, claimed the EC rushed the media shareholding case before the EC sub-committee finished its probe.

He then filed a lawsuit against all seven election commissioners at the Criminal Court for Corruption and Misconduct Cases, only to see it being thrown out with the court saying the commissioners had full authority to forward the share-holding case to the Constitutional Court.

5.In March, the country was kept in suspense over the Constitutional Court’s ruling on the fate of the Thai Raksa Chart Party, which found itself mired in problems for nominating Princess Ubolratana as its prime ministerial candidate.

The moment of truth came on March 7, when the court voted unanimously to dissolve the party. Thai Raksa Chart was believed to have close ties with Pheu Thai Party, which was thought to be under former PM Thaksin Shinawatra’s wing.

The party execs are also banned from setting up parties or becoming executives of other parties for 10 years. 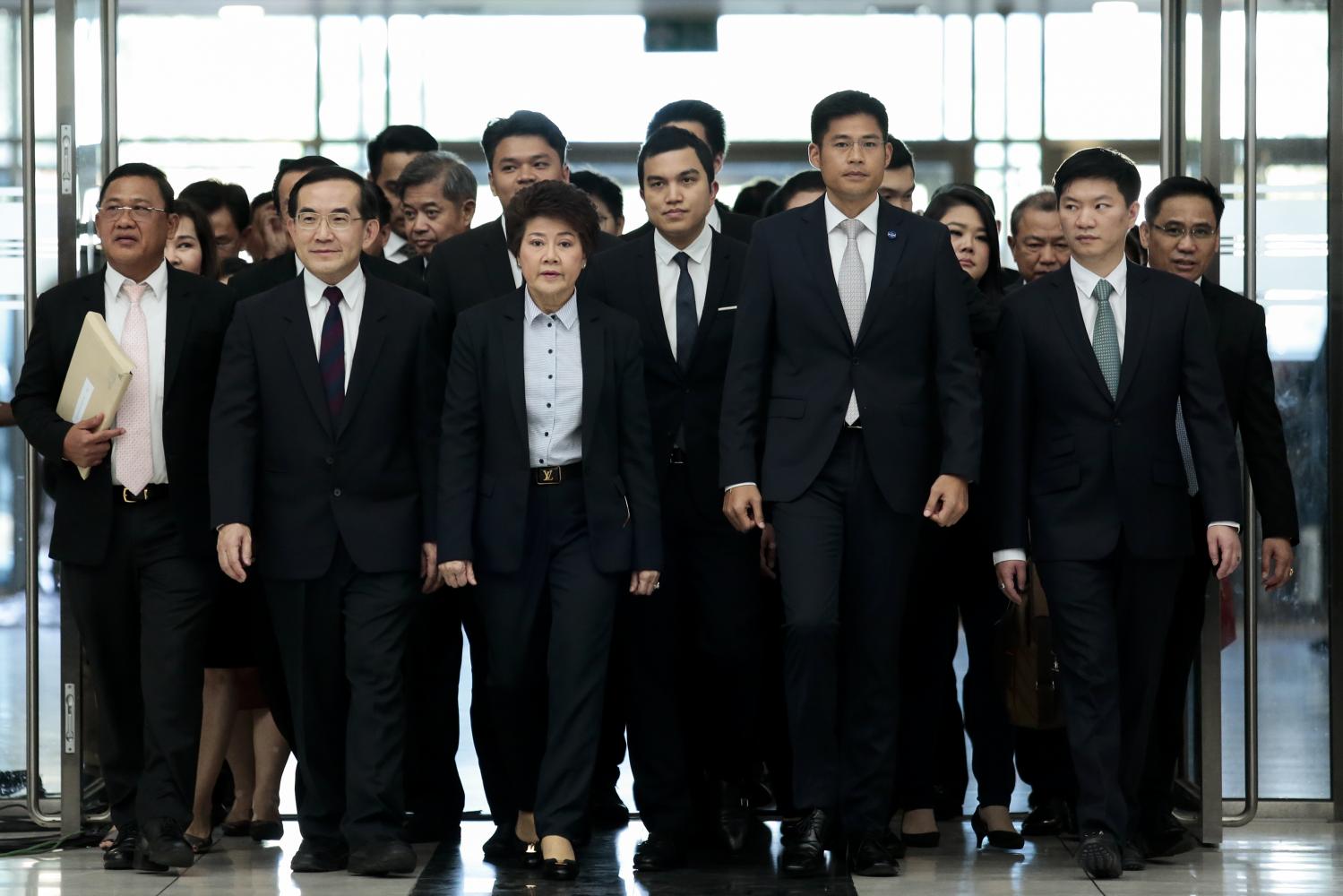 Final verdict: Executives of the Thai Raksa Chart Party arrive at the Constitutional Court which dissolved the party in March.

Thai Raksa Chart has suffered the same fate as Thaksin’s Thai Rak Thai Party, which was dissolved in 2007 by a constitutional tribunal for violating an electoral law.

Its 111 executives subsequently had their political rights revoked for five years.

The People Power Party, said to be Thai Rak Thai’s reincarnation, was also disbanded by the Constitutional Court, and its 37 executive banned for five years.

On Feb 14, the Constitutional Court accepted a petition from the EC in relation to Thai Raksa Chart’s nomination of Princess Ubolratana as a prime ministerial candidate.

His Majesty the King then commanded that members of the royal family are above politics and cannot hold political positions.

In its defence, Thai Raksa Chart said it had received the princess’s consent and that there were no laws barring her from becoming a prime minister as she has relinquished all her royal titles. 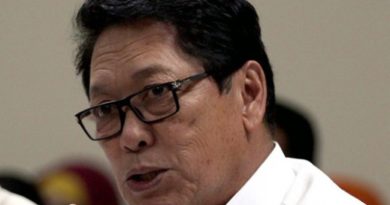 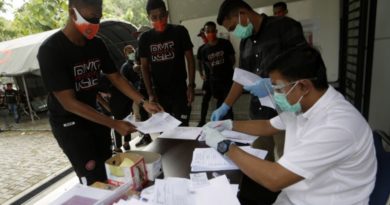 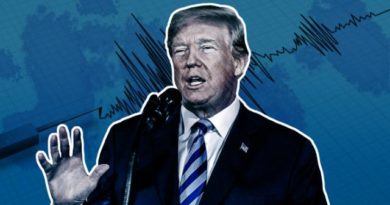 US POLITICS: WASHINGTON – Plenty of presidents lie. Only Trump doesn’t care if you catch him.