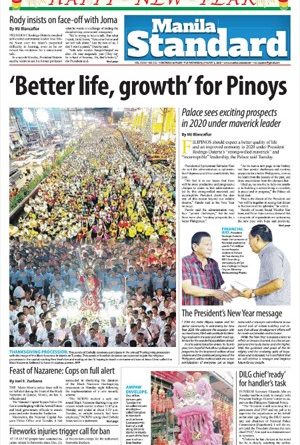 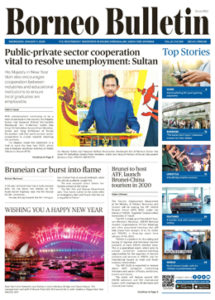 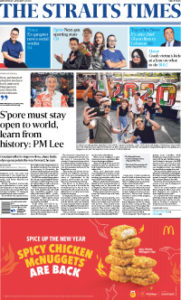 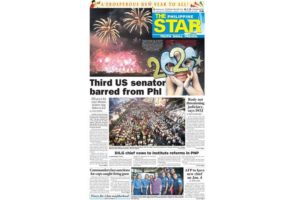 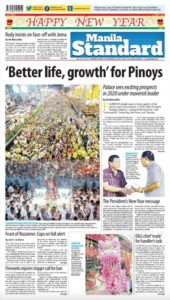 Filipinos should expect a better quality of life and an improved economy in 2020 under President Rodrigo Duterte’s “strong-willed maverick” and “incorruptible” leadership, the Palace said Tuesday.READ: Pinoys see better prospects in 2020

Presidential Spokesman Salvador Panelo said the administration is optimistic that Filipinos would live comfortably this year.“We feel it in our bones that there will be more productive and progressive changes to come as this administration led by this strong-willed maverick and incorruptible President charts the destiny of this nation beyond our wildest dreams,” Panelo said in his New Year message.READ: The President’s New Year messagePanelo said the administration may face “greater challenges,” but he said there were also “exciting prospects for a better Philippines.”“As we turn a new page in our history and face greater challenges and exciting prospects for a better Philippines, even as we learn from the lessons of the past, and draw inspirations from the changes that lifted us, we resolve to help one another in building a nation living in comfort, in peace, and in progress,” the Palace official said.That is the dream of the President and “we will be together in seeing that dream to fruition in all its splendor,” he added.Results of recent Social Weather Stations and Pulse Asia surveys showed that a majority of respondents are welcoming the new year with hope and positivity, posting 96 percent and 93 percent, respectively.“As in previous years, all nations look forward for a better quality of life for them and an improved economy for their countries. We are no exception,” Panelo said.He also expressed hopes that the remaining holidays be spent in energizing and strengthening physical and mental well-being to face the challenges that lie ahead.“As we celebrate the new year with our loved ones, friends and acquaintances, the Palace and the President wish Filipinos all over the globe a healthy, joyous and prosperous New Year!” Panelo said.In a speech Monday, President Duterte admitted that his presidency would be a “total failure” if he does not rid the country of illegal drugs, one of his campaign promises during the 2016 election.“If we cannot control the flow of drugs, then I will consider my presidency a total failure. So I don’t want that to happen. Do not do it,” the President said Monday in a speech in Davao del Sur.Duterte, whose anti-narcotics crackdown claimed the lives of more than 5,000 drug suspects, said the drug menace is “big problem” that threatens families.“I’m trying to save the next generation. I’m not saying I’m the savior but I’m the president now. If I fail to control drugs by the time the graduating college students become fathers or mothers, they would have a problem,” Duterte said.During the campaign, he vowed to put an end to drug trafficking within the first six months of his term. Last April, however, he admitted that the drug trade even worsened despite his tough stance on illegal drugs.“You can read it every day, even in the crawler of the TV networks. There are billions worth of drugs. Before, it was only thousands. Drugs, I cannot control, son of a bitch, even if I ordered the deaths of these idiots,” Duterte said during a campaign rally for the midterm elections.Duterte also said he had underestimated the extent of the problem.His brutal campaign against drugs has been criticized by both local and foreign human rights groups due to reported police abuses, an allegation that has been denied by the Palace and the Philippine National Police.In his speech, Duterte also renewed his threat against politicians and policemen involved in the drug trade.“I am warning you again, be it the police, the mayors or the barangay captains: You will die. If you get involved in drugs, there is no other way to deal with you, except to kill you,” he said.

Meanwhile, the President justified the recent salary hike of military officers and policemen in 2018, saying the government needs people who are not afraid to die for the state’s security and order.“I’ve been hearing a lot of complaints about why I doubled the salary of police, while teachers have yet to receive it. This country is a troubled land. I need soldiers and policemen, who are not afraid to die,” he said.Police officers and soldiers deserve a good compensation for their service, Duterte added.Duterte, however, did not say when public school teachers will receive a pay hike.At the start of 2019, Duterte promised to increase the salaries of public school teachers.On Tuesday, Cabinet Secretary Karlo Nograles said the administration expects to meet its goals of improving infrastructure in 2010 and in the succeeding years.Nograles said the government has made “substantial gains” this year when it comes to implementing infrastructure projects.“We are already experiencing some of the effects of Duterte governance: reduced poverty, higher wages, and low unemployment rates. But our job is not finished yet, and we expect even more positive metrics as more and more of the government’s infrastructure projects are completed,” he said in a statement.“Government infrastructure accomplishments under the leadership of President Rodrigo Duterte will be felt in 2020 and beyond—a reflection of the President’s commitment to implement programs and projects that will improve the lives of Filipinos for years to come,” he added.Nograles said he believed that improvements in several key infrastructures in 2019 will have a “tremendous positive impact” on the current administration’s efforts to meet the primary objective of the Philippine Development Plan 2017 to 2022.He also expressed confidence that the PDP 2017 to 2022, a blueprint aimed at boosting the Philippine economy, will bring a “stable, prosperous, and peaceful life for all.”Nograles noted that so far, the Department of Public Works and Highways was able to construct and rehabilitate around 9,845 kilometers of roads, 2,709 bridges, 4,536 flood mitigation structures, and 120,895 classrooms.“This improved road infrastructure will allow for the faster and more efficient movement of people and goods around different parts of the country, lowering the costs of transportation and, consequently, the costs of commodities in the market,” he said.Duterte will maximize the use of his “available” powers to ensure the full and effective implementation of his administration’s “Build, Build, Build” infrastructure program, Panelo had said in November.Around P9 trillion has been earmarked for the implementation of around 100 flagship infrastructure projects and over 10,000 small infrastructure projects under the “Build, Build, Build” program.About 38 out of the revised list of 100 key infrastructure projects are expected to be completed by 2022, while 22 will be “partially operational or substantially completed” and the remaining 40 would be finished “beyond 2022.”The 35 big-ticket infrastructure projects are ongoing, 32 will commence construction in the next six to eight months, 21 are in the advanced stages of government approval, and 12 in the advanced stages of a feasibility study. Nograles also emphasized the importance of improving the flow of information around the country by designating the Department of Information and Communications Technology as the lead agency to install free Wi-Fi hotspots in public areas.“In 2019, the DICT installed 3,084 live Wi-Fi sites that have connected an estimated 5 million users in Metro Manila and 77 other provinces. This is a key development, as studies show that improved access to the internet provides opportunities for economic growth,” Nograles said.“For example, in a country like ours where 99.5 percent of all businesses are MSMEs (micro, small, and medium-sized enterprises), the internet can drastically reduce transaction costs and address the limitations of distance, allowing them to expand their markets,” he added.Nograles also cited data showing that in developing countries, MSMEs that have access to the internet become 11 percent more productive, and that expanding internet access to the levels found in developed countries could improve the productivity of MSMEs in developing nations by as much as 25 percent. With PNA 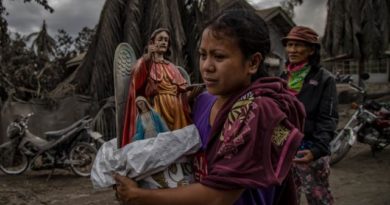 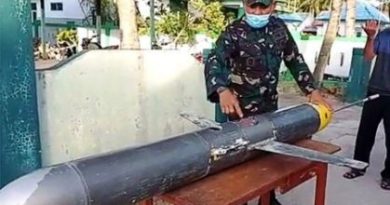 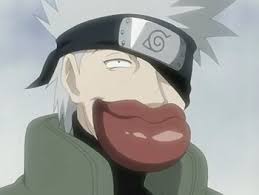