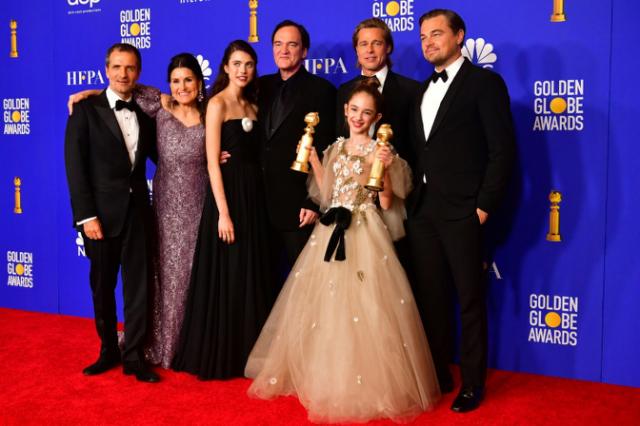 US film director Quentin Tarantino (C), poses with cast and crew of  “Once Upon A Time… In Hollywood”  including actors Brad Pitt (next to Tarantino) and Leonardo DiCaprio, after the film won three Golden Globes

War epic “1917” shocked the Golden Globes on Sunday by claiming the top prize for best drama film, while Quentin Tarantino’s “Once Upon a Time… in Hollywood” won the most honors, massively boosting their prospects for next month’s Oscars.

The Globes are the first major awards gala of the year, in a packed season that ends with the Academy Awards in just over a month’s time, so Sunday’s winners will hope to capitalize on some much-needed momentum.

“1917” follows two British soldiers through the trenches in World War I, and is filmed to look like one continuous, two-hour-long shot.

“Goodness me, that is a big surprise,” said stunned filmmaker Sam Mendes, who bested Scorsese and Tarantino in the crowded best director category.

Dedicating the film to his grandfather who signed up to fight aged just 17, Mendes added: “I hope he’s looking down on us and I fervently hope it never happens again.”

The film’s lead actor George MacKay — a 27-year-old relative unknown in Hollywood — told AFP he was “just thrilled, proper thrilled” when the announcement was made.

“It’s a wonderful thing. It’s truly just so brilliant for the film and everyone involved. It’s the biggest team effort ever.”

Tarantino won the best screenplay award, and Brad Pitt took home best supporting actor honors for his role as a loyal stuntman to Leonardo DiCaprio’s character in “Once Upon a Time…”

“I also have to thank my partner in crime, LDC,” said Pitt.

“I wouldn’t be here without you, man… I would have shared the raft, though,” he added, referring to the closing scene of “Titanic.”

“Rocketman,” the Elton John musical biopic, was the other big winner on the night, scooping best actor for Taron Egerton and best original song for John, who was heavily involved in the movie.

“I’m overjoyed — it’s incredible,” Egerton told AFP. “It’s been the best experience of my life, and winning this is just such a lovely crystallization of all of that.”

The top films clearly resonated with the 90-odd members of the Hollywood Foreign Press Association (HFPA), which doles out the prizes, but frontrunners in the acting categories also made their mark.

Joaquin Phoenix cemented his Oscar favorite status by winning the best drama actor prize for his radical turn in “Joker,” a dark and controversial take on the comic book super-villain.

He thanked director Todd Phillips, saying: “You convinced me to do this movie and you encouraged me to give everything and to be sincere. And I’m such a pain in the ass.”

Like several A-listers, Phoenix also used his speech to address climate change and the Australian wildfires.

Renee Zellweger burnished her Oscar credentials with an expected win for biopic “Judy,” portraying Judy Garland in her later years.

Oscar nominations voting is already under way, but does not close until Tuesday — meaning the Globes results could be a factor.

British comic Ricky Gervais greeted the stars at the booze-soaked banquet with his signature cutting one-liners.

“Let’s go out with a bang, let’s have a laugh at your expense, shall we?” joked Gervais, hosting the awards for the fifth and final time.

Gervais unleashed a no-holds-barred monologue that touched on topics haunting the industry including #MeToo, lack of diversity and the effect streaming giants are having on traditional film studios.

An off-color joke about British actress Judi Dench and the critically slammed film “Cats” was bleeped out by censors.

Among the Globes handed out on the TV side, HBO hit “Succession” won best drama, fending off Netflix’s flagship “The Crown.”

Netflix — which has disrupted the film industry in recent years — began the night far ahead of the traditional Hollywood studios with 17 Globe movie nominations.

“This show should just be me coming out, (saying) ‘You win everything, Netflix, good night,” joked Gervais.

But the streaming giant, which has spent billions to lure the industry’s top filmmaking talent, flopped to end with just one movie win.

Laura Dern won for her supporting turn in “Marriage Story,” a heart-wrenching divorce saga starring Scarlett Johansson and Adam Driver, which began the night with the most nods at six.

“The Irishman,” a favorite to win best picture that cost Netflix $160 million to make, did not convert any of its five nominations. 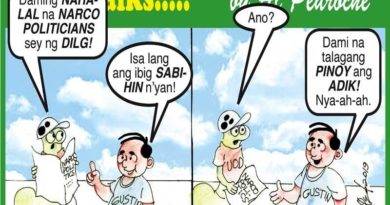 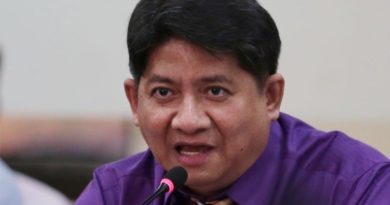 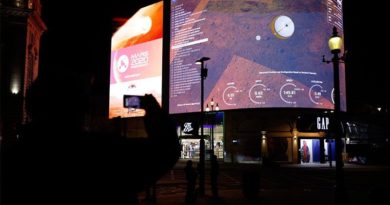