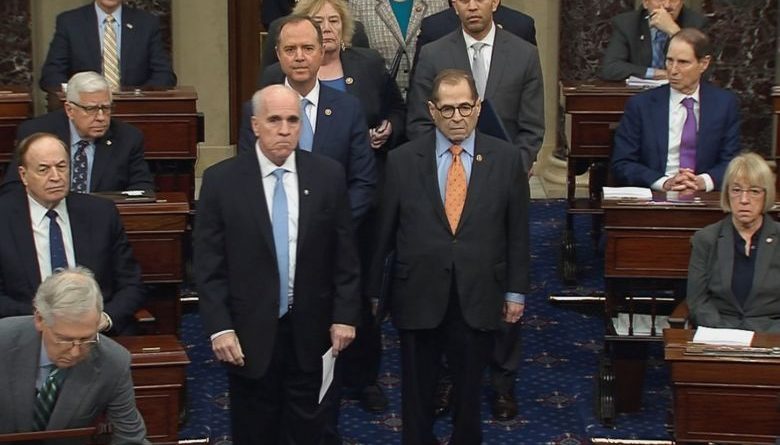 The US Senate Sergeant at Arms Michael Stenger escorts the US House impeachment managers at the US Capitol in Washington.PHOTO: REUTERS

WASHINGTON (AP) – Chief Justice John Roberts was sworn in on Thursday (Jan 16) to preside over President Donald Trump’s impeachment trial, then immediately administered the oath to the full Senate to ensure “impartial justice” as jurors for only the third such proceeding in American. history.

Roberts made the short trip across the street from the Supreme Court before being ushered to the Senate chamber.

“Will all senators now stand, and remain standing, and raise their right hand,“ Roberts said.

“Do you solemnly swear that in all things appertaining to the trial of the impeachment of Donald John Trump, president of the United States, now pending, you will do impartial justice according to the Constitution and laws, so help you God?”

The senators, at their desks, responded and then were called up to sign the oath book.

The Constitution mandates the chief justice serve as the presiding officer. Roberts, who has long insisted judges are not politicians, is expected to serve as a referee for the proceedings rather than an active participant. Senators will ultimately render the verdict. 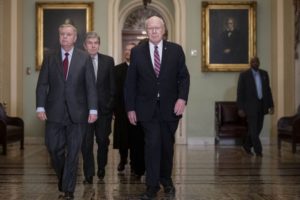 Republican Senator James Inhofe was absent, home in Oklahoma for a family medical issue, his office said. He plans to return when the full trial begins next week.

The Senate opened the impeachment trial at the start of the election year as Trump seeks another term, a test not only of his presidency but also of the nation’s three branches of power and its system of checks and balances. Several senators are running for the Democratic Party’s nomination to challenge Trump in November.

Earlier on Thursday, House Democrats prosecuting the case stood before the Senate and formally read the articles of impeachment against Trump. 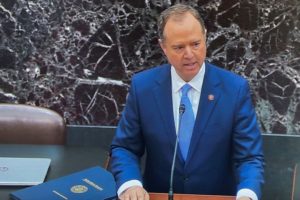 Adam Schiff reads the House articles of impeachment of US President Donald Trump at the Senate.PHOTO: REUTERS

Senators filled the chamber, sitting silently at their seats under strict trial rules that prohibit talking or cellphones, as the ceremonial protocol shifted the proceedings out of Speaker Nancy Pelosi’s Democratic-run House to the Republican-majority Senate. 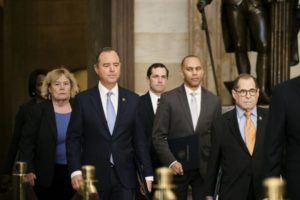 House impeachment managers walk to the Senate on Capitol Hill in Washington.PHOTO: NYTIMES

Seven lawmakers prosecuting the charges, led by Representative Adam Schiff of the Intelligence Committee and Representative Jerrold Nadler of the Judiciary Committee, made the solemn walk across the Capitol for a second day.

“With the permission of the Senate, I will now read the articles of impeachment,” said Schiff, standing at a lectern in the well of the chamber, a space usually reserved for senators.

All eyes were on him.

The other House prosecutors stood in a row to his side.

Trump faces a charge that he abused his presidential power by pressuring Ukraine to investigate Democratic rival Joe Biden, using military aid to the country as leverage. Trump was also charged with obstructing Congress’ ensuing probe.

Ahead of the proceedings, the Government Accountability Office said on Thursday that the White House had violated federal law in withholding the security assistance to Ukraine, which shares a border with hostile Russia.

The president calls the impeachment a “hoax,“ even as new information emerges about his actions toward Ukraine that led to the charges against him.

Pelosi said new allegations from an indicted associate of Trump lawyer Rudy Giuliani, Lev Parnas, only reinforces the need for the Senate to consider further testimony about the president’s actions toward Ukraine.

Pelosi noted that typically a special prosecutor would investigate but she doubted that would happen. 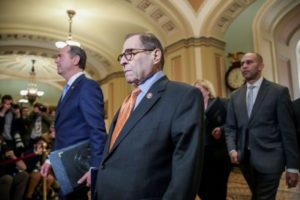 House impeachment managers walk through the Ohio Clock Corridor as they arrive for the procedural start of the Senate impeachment trial.PHOTO: REUTERS

Trump impeachment: Was someone tracking the US ambassador in Kiev?

Senate Majority Leader Mitch McConnell opened the chamber on Thursday decrying Pelosi’s decision to hand out “souvenir pens” after she signed the resolution to transmit the charges to the Senate.

Democratic Senate leader Chuck Schumer renewed his party’s request that the trial include new witnesses and documents not available for the House impeachment proceedings.

“What is the president hiding? What is he afraid of?” Schumer said.

“The gravity of these charges is self-evident,“ he said. “The House of Representatives have accused the president of trying to shake down a foreign leader for personal gain.”

The president has suggested recently that he would be open to a quick vote to simply dismiss the charges, but sufficient Republican support is lacking for that. Still, an eventual vote to acquit Trump is considered highly likely.

On Wednesday, in a dramatic procession across the US Capitol, House Democrats carried the charges to the Senate.

“Today we will make history,” Pelosi said as she signed the documents, using multiple pens to hand out and mark the moment. “This president will be held accountable.“

Moments later the prosecutors walked solemnly through the stately hall, filing into the Senate back row as the clerk of the House announced the arrival: “The House has passed House Resolution 798, a resolution appointing and authorising managers of the impeachment trial of Donald John Trump, president of United States.”

Opening arguments are to begin next Tuesday after the Martin Luther King Jr holiday.

Earlier on Wednesday, the House voted 228-193, almost entirely along party lines, ending a weeks-long delay to deliver the charges with a tally reflecting the nation’s split.

The top Republican in the House, Kevin McCarthy of California, said Americans will look back on this “sad saga” that tried to remove the president from office with the “weakest case.”

The president’s team expects acquittal with a Senate trial lasting no more than two weeks, according to senior administration officials. That would be far shorter than the trial of president Bill Clinton, in 1999, or the first one, of president Andrew Johnson, in 1868. Both were acquitted.

The seven-member prosecution team is led by the chairmen of the House impeachment proceedings, Representatives. Adam Schiff of the Intelligence Committee and Jerrold Nadler of the Judiciary Committee, two of Pelosi’s top lieutenants.

On Wednesday, Schiff released new records from Lev Parnas, an associate of Trump lawyer Rudy Giuliani, about the Ukraine strategy, including an exchange with another man about surveilling later-fired US Ambassador Marie Yovanovitch.

Schiff said the new evidence should bring more pressure on McConnell, who is reluctant to allow witnesses to testify and prefers swift acquittal. The White House has instructed officials not to comply with House subpoenas for testimony and documents.

“The challenge is to get a fair trial,” Schiff said in an interview with The Associated Press. “It shouldn’t be a challenge – if the senators are really going to live up to their oath to be impartial, they’ll want a fair trial. That’s obviously not where Mitch McConnell is coming from.”

The managers are a diverse group with legal, law enforcement and military experience, including Hakeem Jeffries of New York, Sylvia Garcia of Texas, Val Demings of Florida, Jason Crow of Colorado and Zoe Lofgren of California.

Two are freshman lawmakers – Crow a former Army Ranger who served in Iraq and Afghanistan, Garcia a former judge in Houston. Demings is the former police chief of Orlando and Jeffries is a lawyer and member of party leadership. Lofgren has the rare credential of having worked on the congressional staff investigation of President Richard Nixon’s impeachment – he resigned before the full House voted on the charges – and then being an elected lawmaker during Clinton’s.

Republican Senator Susan Collins of Maine is leading an effort among some Republicans, including Mitt Romney of Utah, Lisa Murkowski of Alaska and Lamar Alexander of Tennessee, to consider Senate witnesses. She told reporters she was satisfied the rules will allow votes on that.

Romney said he wants to hear from John Bolton, the former national security adviser at the White House, who others have said raised alarms about the alternative foreign policy towards Ukraine being run by Giuliani.

Any four senators could force an outcome. Republicans control the chamber, 53-47, but it takes just 51 votes during the trial to approve rules or call witnesses. It also would take only 51 senators to vote to dismiss the charges against Trump. 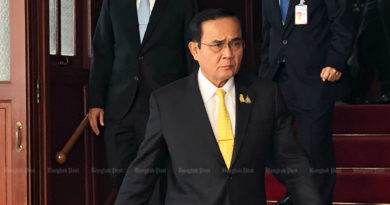 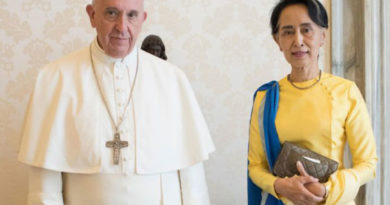 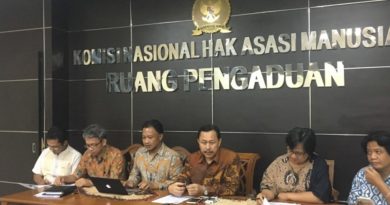