MANILA, Philippines — A pediatric transplant surgeon from the Philippine General Hospital (PGH) is the latest medical frontliner to lose the fight against the coronavirus disease 2019, as two other doctors have also succumbed to COVID-19.

Resurreccion, 57, was head of the Pediatric Surgery Division of the Philippine Children’s Medical Center (PCMC).

“The PCMC Family mourns the passing of a great surgeon, teacher, academician and friend to all… He will be missed. Our first fallen soldier in the battle vs COVID-19,” the hospital said in a statement.

Resurreccion was “well known locally and abroad as forward-looking in his vision for pediatric surgery, especially in liver transplants, which he was working (on) to the end,” according to the PCMC.

The PCMC has described the late surgeon as “always smiling, friendly and very cool.”

Resurreccion’s death was also confirmed by his daughter Pia Isabel on her Facebook page. She said her father “has been in battle with COVID-19 for around three weeks.”

“It is with our deepest sorrow to say that he has lost the battle. He passed away this morning at the intensive care unit of the PGH. Although we could not see him through this ordeal, he was under the best care of his PGH family. For all their efforts we are truly grateful,” his daughter noted.

Santiago added that 13 of these doctors were COVID-19 cases while four were non-COVID.

Another doctor succumbed to COVID-19 also yesterday, four days after his wife – who was also a doctor – died from the disease.

The death of Dennis Tudtud, an oncologist in Cebu, was announced by his son Dennis Thomas in a post on Facebook.

“Our Daddy Dennis has joined Mommy Helen. My sister and I are in deep sorrow that God had to take both of them, but I take comfort that they are happy together in their journey to paradise,” Dennis Thomas said in the post.

The younger Tudtud, who celebrated his birthday yesterday, appealed to the public to remember and pray for his parents as they journey together to heaven.

“Please also pray for those who are still fighting this battle. My parents may have lost but the Lord won two angels,” he said.

“His selflessness did not stop in our home. As a doctor, he would even pay for the chemotherapy sessions of some of his patients just so their families could spend more years with them. He was generous beyond words could even describe.”

President Duterte hailed the doctors and medical personnel who lost their battle to COVID-19, saying they did not die in vain.

In a televised address late Monday, Duterte said he envied those who died while doing their duties because they sacrificed their lives serving the Filipinos.

“There were doctors, nurses, attendants who died while helping others. They are so lucky. They died for the country. That should be the reason when we die,” Duterte said.

He said he does not mind dying in the fight against COVID-19. He has been vocal that he wants to die in the name of the country rather than die of illness.

Earlier, he assured medical workers and the public that the government is doing everything to arrest the spread of the disease.

Addressing the health workers, Duterte said: “Let us not die because of some other reasons, like you get hit (by a vehicle) even if you are not doing anything. It would be an honor to die for your country, I assure you.”

The President’s statement came as many paid tribute to about a dozen doctors who have died of COVID-19 after acquiring the disease while treating their patients.

Anyone who will attack health workers will be arrested, the Philippine National Police (PNP) said yesterday.

“At this time of national health emergency, the PNP stands doubly committed to apply the full might of the law against any person who will lay hands on our health workers,” Gamboa said in a statement following reports that health workers in Cebu and Sultan Kudarat were assaulted.

There were also reports of health workers facing discrimination from neighbors and landlords, who reportedly kicked them out of their apartments for fear they might get infected with the virus.

Meanwhile, the Integrated Bar of the Philippines (IBP) has expressed support for healthcare workers and other frontline workers as well as patients who have been victims of discrimination due to COVID-19.

IBP national president Domingo Egon Cayosa issued the statement amid reports that health workers, frontliners as well as COVID-19 patients are denied entry in boarding houses and hospitals as well as transportation services.

“Precautionary measures are understandable and desirable but they should remain reasonable and within the bounds of law,” he added.

Cayosa urged his fellow lawyers to help uphold the rights and defend the healthcare workers and frontliners.

The Department of Transportation (DOTr) has extended assistance to 13,068 medical workers by transporting them to their designated hospitals in Metro Manila.

The Department of Public Works and Highways (DPWH) also provided shuttle buses to give free rides to health workers.

The buses will ply the east area route 14 and 16 assigned by the DoTr, according to Noel Toribio Ilao, director of DPWH’s bureau of equipment.

Ilao said all bus drivers and crew are provided with personal protective equipment and the free bus service complies with Department of Health’s COVID-19 containment protocols such as the observance of social distancing, body temperature checks and regular disinfecting of vehicles.

House committee on constitutional amendments chair Rufus Rodriguez has urged the Department of Labor and Employment (DOLE) to stop deploying nurses abroad as the country is battling the pandemic.

“We need our healthcare personnel here at this time of public health emergency to attend to sick Filipinos and not to foreigners,” Rodriguez said.

He said the country’s healthcare system is overwhelmed with COVID-19 cases and many public and private hospitals are complaining of lack of personnel.

“We need those nurses bound for Germany and other jobs overseas to augment our dwindling public health workforce,” he said.

Rodriguez said hundreds of doctors, nurses and other hospital staff have been sidelined by COVID-19 as they are on quarantine due to exposure to the virus.

He said the deployment could resume after the country successfully defeats the disease. 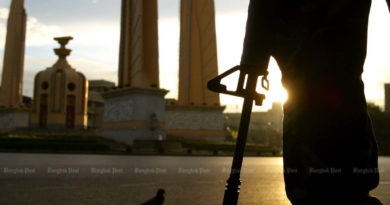 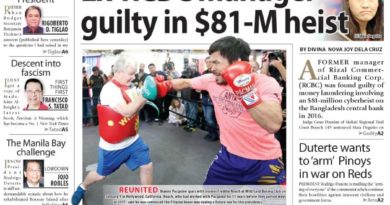