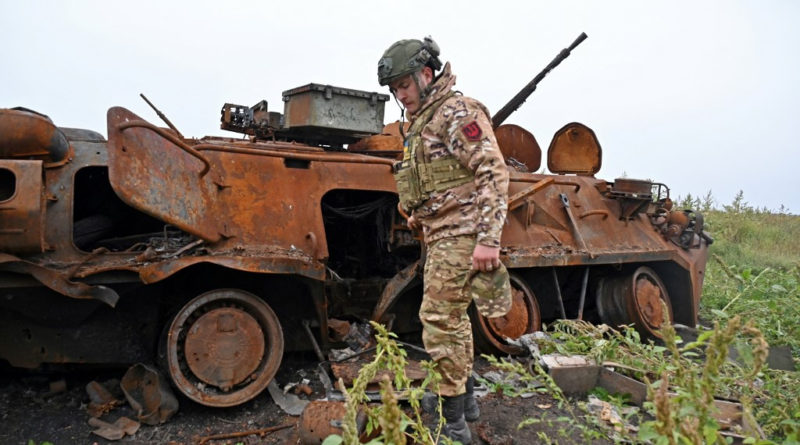 Russia’s attacks on a dozen Ukrainian cities on Monday, in what Moscow calls retaliation for the sabotage of the Kerch Bridge to Crimea, bring the world ever closer to nuclear war, four U.S. government and military sources told Newsweek. The officials, all working on nuclear-weapons issues, said that not enough is being done to avoid nuclear escalation at a time that battlefield developments are repeatedly exposing the weakness of President Vladimir Putin‘s conventional forces and leaving him with dwindling alternative options.

“Russia is losing the war in every way,” a senior Defense Intelligence Agency officer told Newsweek. “But we can’t celebrate Ukrainian victory, not yet. The very conditions that Putin has told us might justify nuclear escalation are emerging. That includes threats to Russia’s territorial integrity and the very survival of the state.”

“Putin has now fully demonstrated that he has no regard for our values or principles,” a second senior military officer said. “What would drive him to use nuclear weapons, not what would satisfy some Washington pundit, is the question we should be seized with.”

All the officials agreed that pontification by U.S. officials over the consequences from the use of nuclear weapons misses the main point of deterring their use. They called for a clearer articulation of a nuclear-deterrence message, while finding a way for Putin to avoid any feeling that he has no choice but to utilize them.

“Enough already with talking about the lack of military utility or the terrible consequences of going nuclear,” a third senior intelligence official said. “Our task now has to be getting into Putin’s mind, not only to deter him but also to craft an out for him.

“Can Putin lose the war without escalating?” the official said. “We have to at least try to assist him. The good of the planet at this point is more important than the defeat and humiliation of a single nuclear madman.”

The officials spoke to Newsweek on condition of anonymity to address highly sensitive matters and to criticize Washington and NATO policy.

From the very beginning of the Ukraine war, Russian President Vladimir Putin has threatened nuclear escalation, saying that an “existential threat” to his country could provoke his decision to cross the threshold.

Now, Russian forces are being routed on all fronts. Russia also sees its territory as being under attack – with Saturday’s explosion on the Kerch Bridge linking the country to Crimea as an example. That appears to be creating the very conditions Putin has said might drive him to nuclear use.

Buoyed by its victories with the help of Western-supplied weaponry, Ukraine has hardened in its position that Russia must leave all Ukrainian territory. Negotiations have also become less of a priority for Kyiv, limiting Putin’s options.

Ukrainian President Volodymyr Zelensky has accused Putin of “nuclear blackmail,” and Ukraine’s allies agree that Russia should not be rewarded for invading land and claiming it as its own.

“Ukrainian success, and the domestic opposition that has accompanied the [Russian] national mobilization because of it, pushes Putin further and further into a corner,” the senior U.S. intelligence official said. “The existential survival of Russia is increasingly at stake, as is Putin’s own survival.”

After the attacks on Monday, Putin warned that retaliatory strikes on government command centers and electrical power production in greater Ukraine were not only a direct response to the Kerch Bridge attack but also another rung on the ladder of escalation.

“It is simply no longer possible to leave crimes of this kind unanswered,” Putin said. If Kyiv continues to carry out attacks on Russian territory, he added that the response would “be brutal and will correspond in scale to the level of threats created for the Russian Federation.”

Putin is a “cornered animal,” retired Adm. Mike Mullen said on Sunday. The former chairman of the Joint Chiefs of Staff under Presidents George W. Bush and Barack Obama said that Washington should take Putin’s nuclear threats seriously, because the Russian president has “lots of options” available.

But in the Monday attacks, the most significant on the capital, Kyiv, and other Ukrainian cities since February, the officials who spoke to Newsweek agreed: Russia also demonstrated the limits of its conventional options.

“Seven different types of missiles, including air-defense missiles used in a ground attack role and Iranian kamikaze drones flying from Belarus? All pieced together with duct tape? With over half of them technically malfunctioning or missing their targets?” said the Defense Intelligence Agency officer.

“It should be taken as a sign of how depleted and desperate Putin is. He’s reached the bottom of the barrel. Much further down, and all that’s left is nukes.”

The United States and NATO have been closely monitoring that barrel, looking for any signs that Russia might be preparing a nuclear strike.

“We have not seen any changes in Russia’s [nuclear] posture,” NATO Secretary General Jens Stoltenberg said on Tuesday.

U.S. Secretary of Defense Lloyd Austin said on Sunday that the Pentagon hadn’t yet seen evidence that Putin had decided to resort to nuclear weapons, though he added that the decision to do so was the Russian leader’s alone.

“To be clear, the guy who makes that decision, I mean, it’s one man,” Austin said in an interview with CNN‘s Fareed Zakaria. “There are no checks on Mr. Putin. Just as he made the irresponsible decision to invade Ukraine, you know, he could make another decision.”

The officials who spoke to Newsweek express worry, nonetheless, that monitoring Russia’s nuclear forces, “right up to the last minute” as one said, should not be equated with some success in policy or deterrence.

“We function as if being on top of the date and time of Putin pushing the button is a triumph,” the senior intelligence official said. “I’m not confident that we have consensus as to what would happen then, or more importantly, what exactly is the right decision to make at the 11th hour.”

“Russia knows that a nuclear war cannot be won and must never be fought,” NATO Secretary General Stoltenberg said on Tuesday, again repeating what the officials who spoke to Newsweek consider to be hollow rhetoric.

“Washington and NATO seem too focused on a public message, and not on a solution,” the Strategic Command officer said. “I’ve been watching Putin for years, and I’m convinced that this is not going to play out according to academic theories of nuclear deterrence.”

The officer added that what Putin might do is the question, not whether Russian doctrine is being followed to the letter, or whether all of the paperwork for nuclear war is completed properly.

What is more, President Biden’s Thursday remarks about the possibility of Armageddon were more evidence that his administration was more focused on messaging than concrete actions that might deter Putin, the officials said.

At a Democratic Party fundraiser in New York City on Thursday, among discussion of domestic politics, Biden‘s comments veered to the possibility of nuclear war with Russia.

“We have not faced the prospect of Armageddon since Kennedy and the Cuban missile crisis,” the president said.

Putin is “not joking when he talks about potential use of tactical nuclear weapons or biological or chemical weapons,” Biden went on to say, adding that the Russian leader’s “military is, you might say, [is] significantly underperforming.”

Biden’s remarks were criticized from several quarters. “We must speak with prudence when commenting on such matters,” French President Emmanuel Macron said.

“When you hear the president talking about Armageddon… as a random thought, just musing at a fundraiser, that is a terrible risk to the American people. If he truly believes that he ought to be out talking to us in a serious way,” Pompeo added.

Admiral Mullen said that President Biden’s terminology was “at the top of the language scale, if you will.”

Sir Jeremy Fleming, head of the British Government Communications Headquarters, the UK’s equivalent of the National Security Agency, said that “any talk of nuclear weapons is very dangerous, and we need to be very careful of how we are talking about that.”

The White House, for its part, said there was no joke involved in Biden’s remarks and that U.S. policy is clear. “The United States is not ready to publicly talk about the specific consequences for the Russian Federation in the event of a decision to use nuclear weapons,” it said, belying any such clarity.

Clarity isn’t possible because, in his remarks, Biden all but admitted that his administration hadn’t resolved the basic question of deterring Putin. “I’m trying to figure out what is Putin’s offramp,” the president said. “Where does he find himself in a position that he does not only lose face but lose significant power within Russia?”

“He’s trying to figure it out?” the senior intelligence officer said. “We have the power to influence how that offramp might work. I’m not comfortable criticizing a president, as if I’m some partisan animal, but we are just not doing enough.”

Adm. Mullen agreed, saying that the United States needs to “do everything we possibly can to try to get to the [negotiating] table to resolve this thing.”

“Every nuclear expert on the planet is now out telling us the history of the Cuban missile crisis, spinning out radiation plume models, pontificating about where a safe place would be to survive a nuclear war,” the strategic command officer said.

“Deterrence as a whole of government holistic endeavor, though, demands that we think about the now, and not the aftermath. In that task, I’m not even sure I understand the message. That Russia is finished, if? That Putin would be dead, if? Those fears are the very scenarios that might provoke Putin to break all convention and cross the threshold in the first place.”

“I don’t think that nuclear war is imminent,” said the senior intelligence officer. “But then I’m not Putin. It’s not in what we say that will prevent nuclear war. It’s in what we will do, what’s in our power right now.

“Russia has lost. Let’s strike a bargain to give Putin an out – not in abandoning Ukraine, but in letting Putin and his regime survive, in paying him off to leave, if you will.” 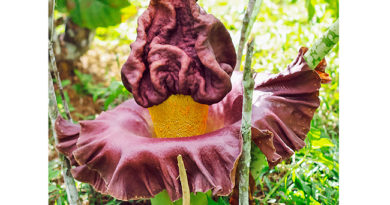 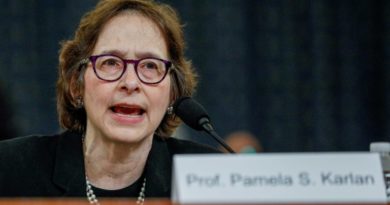