PETALING JAYA: Former True Fitness Malaysia employees claim that they have yet to receive their outstanding salaries and commissions despite the company’s assurance that payments will be made on June 19.

True Fitness Malaysia had announced on June 9 that it had ceased all operations of its three gym and spa facilities located in Jaya 33, Taipan Subang and Sunway Giza as they were “no longer financially viable” due to evolving market conditions.

It was reported that some of its former staff members claimed that they had not been paid for four months, with over RM66,000 in unpaid commissions.

On June 13, a spokesman for Singapore-based True Group said that its accounts had been “held back” due to the announcement of the closure of its fitness centres in Malaysia.

Former exercise country manager David Thoong said that he and the instructors under his team have yet to receivethe money owed to them in full.

“I have received my salary but it does not tally with the outstanding amount my records show. I’m supposed to be paid RM13,000, but they only banked in RM9,000,” he said on Friday.

“We do not know why we were not paid in full, and there hasn’t been any statement from them,” he said, adding that 46 other instructors also faced similar issues.

Former Taipan outlet fitness manager Shahrul Hamiri Sharuddin said he and his team have received their salaries but did not receive their May commissions, while former HR executive Nor Amira Amrom said she has not been paid for the nine days of work in June before the company’s abrupt closure.

Shahrul Hamiri said that the chain’s operations closed down before the local headquarters could finalise their claims.

Another batch of 20 employees, including four international staff members, are waiting for their salaries.

Yoga instructor Deepak Kumar Jain, who hails from India, said they were told to return to their home country three days after the announcement of the company’s closure as their visas would be terminated.

“On Friday night (June 9), I received a message that my employment has stopped. On Wednesday (June 14), they called us to collect our passports and flight tickets (to go home),” he said, adding that the management had kept their passports for “safety purposes”.

“Now we are in India, jobless,” the father of two said.

Staff lament that there has been a lack of information from True Group about the status of their payments.

“The office has closed down and no one has contacted me about how I can receive my cheque … we have been ignored,” claimed body combat instructor Steven Goh.

According to Shahrul Hamiri, they will continue to pursue their complaints at the Labour Department to demand for their outstanding payments and compensation for being retrenched without notice.

The Star has yet to receive a response from True Group over the matter.

It was previously reported that the closure of True Fitness branches in Malaysia and Thailand was required under the franchise agreement between Singapore-based parent company True Group and Chinese investor Tongfang Kontafarma Holdings Ltd. 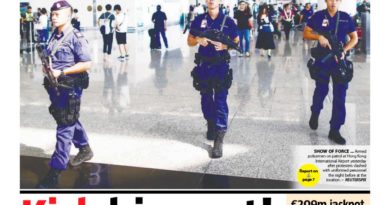