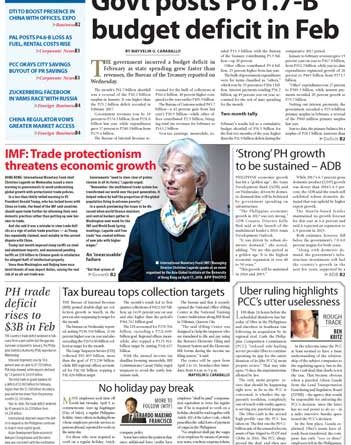 The government incurred a budget deficit in February as state spending grew faster than revenues, the Bureau of the Treasury reported on Wednesday.

The month’s P61.7-billion shortfall was a reversal of the P10.2-billion surplus in January. It was higher than the P23.7-billion deficit recorded in February 2017.

The Bureau of Internal Revenue accounted for the bulk of collections at P116.6 billion, 10 percent higher compared to the year-earlier P105.9 billion.

The bulk of government expenditures were for items classified as “others,” which rose by 35 percent to P204.1 billion. Interest payments totaling P36.2 billion, up 49 percent year on year, accounted for the rest of state spending for the month.

February’s results led to a cumulative budget shortfall of P51.5 billion for the first two months of the year, higher than the P21.5-billion deficit during the comparative 2017 period.

Land Bank of the Philippines market economist Guian Angelo Dumalagan said the fiscal performance report was quite promising as it supported views that government spending would help spur economic growth this year.

This should help boost investor confidence by validating market expectations, he said.

“With that said, I think an important aspect to monitor now is consistency. While the government is starting on a
strong note, it remains to be seen if such strength would endure for the rest of the year and translate to an achievement of the government’s spending and revenue targets,” Dumalagan added.

“Headline and core government spending growth rates accelerated in February to 37 percent and 35 percent, respectively. These annual increases are not just a result of base effects with February 2017 spending of near flat year-on-year,” he explained.

Cuyegkeng added that government policies of a “cash-based budget” and the one-year effectivity of the approved budget procurement program were pushing government agencies to improve spending performance.

He also pointed out that spending was on track to hitting 31 percent growth in the first quarter, significantly faster than year-earlier result of just 2 percent.

“This implies that March spending should continue at an accelerated pace of 39 percent annual gain. The strong fiscal stimulus would offset the drag that higher inflation may have on household spending and moderate business and investment spending,” Cuyugkeng said.

This will likely bring the first quarter GDP growth closer to government’s 2018 target growth of 7-8 percent, he added.

“We have revised higher our first quarter GDP growth forecast from 6.5 percent to 6.9 percent and full year growth to 6.8 percent from 6.7 percent,” Cuyugkeng said. /  BY MAYVELIN U. CARABALLO, TMT ON APRIL 12, 2018

All photographs, news, editorials, opinions, information, data, others have been taken from the Internet ..aseanews.net | a[email protected] | For comments, Email to : Pahulu Gan – Contributor | [email protected] 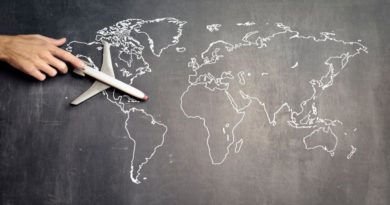 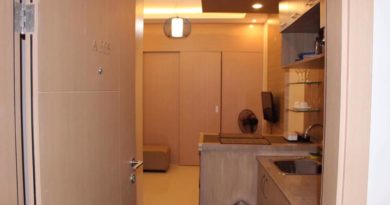 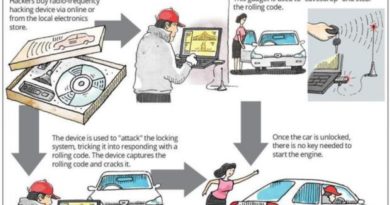