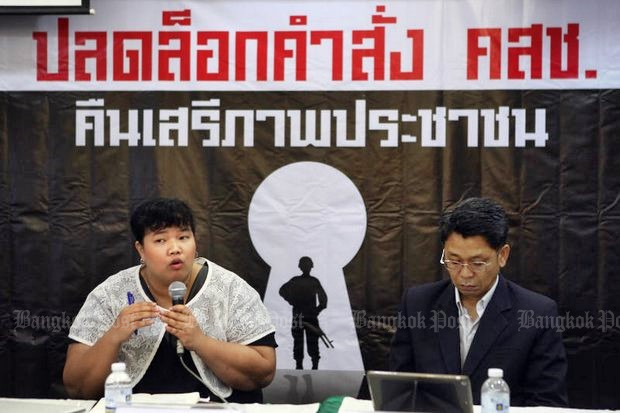 Reporters, editors and other media workers held meetings to demand freedom of the press on World Press Freedom Day, Thursday, at the Thai Journalists Association headquarters (above) and the Foreign Correspondents’…

Since the NCPO came to power “we have called for this every year, but this year is different as we are sticking to the roadmap to the election”, said Pramed Lekpetch, president of the Thai Journalists Association (TJA).

He said the TJA, the Thai Broadcast Journalists Association and the Online News Providers Association, will ask political parties to advocate media reform if they form the next government.

At the TJA headquarters, the three media associations demanded the NCPO revoke any orders that have limited the freedom of the press — to be in line with the constitution and before the run-up to the election.

Meanwhile, NCPO spokesman Winthai Suvaree said the NCPO’s orders do not affect “honest” media but only those which present distorted content, cause panic among the people or affect peace and order.

“Mainly they [the orders and announcements] ask for cooperation. Nowadays they exist but the media can still work normally and are not affected,” he said.

In addition to this, the media associations asked the public to be careful not to disseminate false or illegal information, including fake news.

The public was also urged to help examine the work of the media to ensure they are ethical.

Another event was held Thursday at the Foreign Correspondents’ Club of Thailand based on the theme, “Keeping Power in Check: Media, Justice and the Rule of Law”.

During the event, Yingcheep Atchanont, programme manager at Internet Dialogue on Law Reform (iLaw), criticised the NCPO’s announcement No.97 from 2014.

He said it threatened press freedom by enabling the government to go after print and broadcasting media deemed to be undermining the NCPO’s credibility.

“We can document at least 52 times the NBTC has persecuted outlets critical of the government,” Mr Yingcheep said, adding that two of the most famous cases involve the suspension of operations at Peace TV and Voice TV.

He said Section 116 of the Criminal Code, which deals with sedition, has been used to intimidate people who wish to speak out against the military and government policy.

“We can document 94 people who were arrested under [Thailand’s] sedition law with one given the longest sentence of seven years in prison. About half were tried in military courts,” he said. 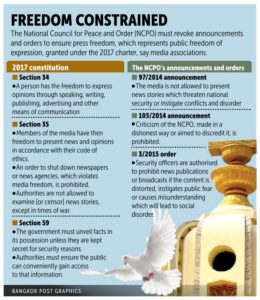 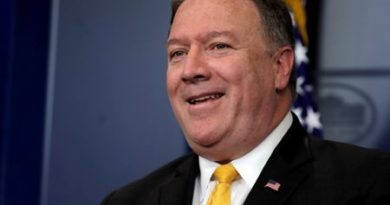 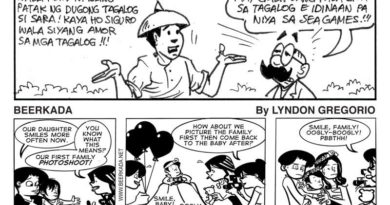 COMICS: Send In the Clown: “PROF”