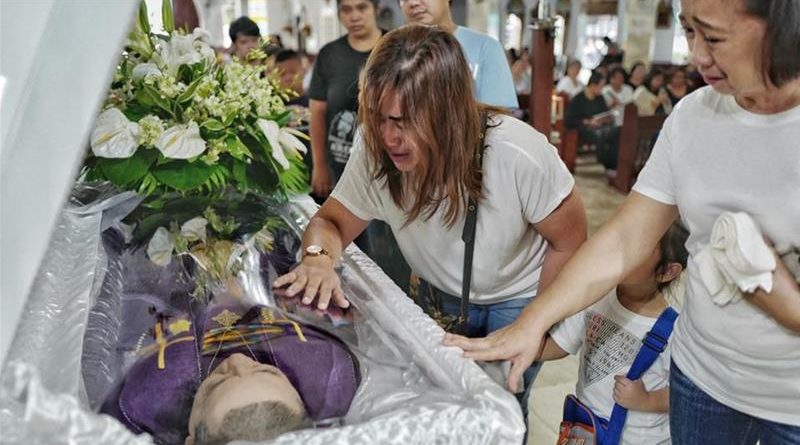 Editorial FEATURED Opinion
June 14, 2018June 14, 2018 Editor 0 Comment COLUMN-OPINION: OPINION ON PAGE ONE - Have they started killing Catholic priests?
Nilo was preparing for a church service on Sunday when he was killed by unidentified gunmen [Ezra Acayan/Al Jazeera]
.

I WAS in Naga City on Monday to help bury a dear friend who had died of natural causes at 86, when in the middle of the funeral Mass, I was told by text that my friend, former national security adviser and former Congressman Roilo Golez, 71, had died after a heart attack. This leaves a void in the ranks of those fighting mightily for the Philippines’ sovereign rights over the islands, islets, reefs and shoals within the West Philippine Sea that are being militarized by the People’s Republic of China.

Roy, a graduate of the Annapolis Naval Academy and a former captain in the Philippine Navy, took very seriously the matter of our maritime territory under the UN Conference of the Law of the Sea, and spoke of it with a passion and conviction which would not be easy to replicate or replace. I had the recent privilege of having him on my weekly cable TV show with Catholic broadcaster Ariel Ayala, and learned much from his knowledge of the case. He was preparing for an interview on the same subject with ABS-CBN’s Christian Esguerra when death struck. His death is a great loss to this vital Philippine cause, which has yet to win the support of President Rodrigo Duterte.

The killing of priests
But as important as this loss was, my Bicolano friends who had gathered to mourn the passing of one of their most beloved church workers, Hilda Padillo Quizon, sister-in-law of the late Auxiliary Bishop Emeritus Salvador Quizon of Lipa, (1924-2016), were understandably more anxious about the shooting of Catholic priest Father Richmond Nilo in a small chapel in Zaragoza, Nueva Ecija. His murder was preceded by that of the retired 72-year-old priest, Fr. Tito Paez in Jaen, Nueva Ecija in December 2017, and that of Fr. Mark Anthony Ventura, 37, in Gattaran, Cagayan in May this year. There have been no suspects, and no clues on the reasons behind the killings.

There were no signs either that anti-Catholic extremists were involved in these murders as in the celebrated case of the 86-year-old French priest, Fr. Jacques Hamel, of Saint-Etienne-du-Rouvray, Normandy, France, who was leading the eucharistic celebration on July 16, 2016, when some IS terrorists forced him to go down on his knees and then slit his throat. His last words to his murderers were, “Begone, Satan!” —a fitting rebuke to the forces of darkness that have tried to envelop the Church.

Fathers Nilo and Ventura appeared to have been killed by motorcycle gunmen riding in tandem, possibly for their active advocacies against certain policies harmful to the poor. They must have stepped upon powerful vested interests. Fr. Paez for his part was reportedly ambushed by unidentified gunmen and shot nine times while driving home after facilitating the release of an unjustly accused local political prisoner. He was known to have been a tireless worker for justice for the poor and the excluded. At least 10 bishops, including the papal nuncio, Archbishop Gabriele Giordano Gaccia, and over 100 priests concelebrated his December 10, 2017 funeral mass, all vested in white and a red stole, red being the liturgical color of martyrdom.

Malacañang echoes CBCP
The Catholic Bishops’ Conference of the Philippines has condemned the murders; Malacañang joined the CBCP in condemning the latest murder. But the Palace has to do a little bit more to drive home a stronger message. President Duterte could begin by adopting a much more civil and respectful attitude towards the Church, the clergy and religious. He has unfortunately contributed to a culture that is pagan and anti-Church, as evidenced by many of his public acts and statements.

His first controversial statement as a would-be president, recounting the gang rape of a young Australian missionary in Davao, and expressing regret that he, as city mayor, did not have the chance to be part of the gang rape, showed, among other things, so much disrespect for the religious in general, and for the missionary herself in particular, which so many misguided minds might have found worth imitating.

His cruel and unusual treatment of the 71-year-old Australian missionary, Sister Patricia Fox, whom he said he had ordered arrested for interfering in the nation’s internal affairs through her “missionary work,” has certainly heightened the anti-Church and anti-religious animus among his subalterns and lackeys. His personally distributing Altar of Secrets: Sex, Politics and Money in the Philippine Catholic Church, a book of questionable merit, whose obvious purpose was to create a scandal about the alleged misadventures of some members of the Catholic Church, to a public that includes two women he had asked to kiss him on stage, and a married one he had kissed on the lips during his recent visit to South Korea, showed a demented desire to offend and humiliate the entire Catholic Church using the alleged offenses of a few unfaithful clerics.

When you have a president who tries to promote himself on the basis of his disrespect and contempt for the Church, the clergy, religious and all things sacred, you cannot be surprised if one day some of admirers of the president start slandering or killing priests and religious. In fact, this was the question one priest asked of me later that day. Have they started killing priests the way they have been killing journalists and drug suspects? he asked. He noted that the killing of priests ironically coincided with the Year of the Clergy and Consecrated Persons, as proclaimed by the Pope. Not only that.

Year of the clergy and Saint Oscar Romero
This year is also the year the Church would be canonizing Blessed Bishop Oscar Romero (born August 15, 1917) of San Salvador, who was assassinated by a rightwing death squad while saying mass inside a hospital chapel in his archdiocese on March 24, 1980. Beatified in 2015, the bishop will finally be canonized by Pope Francis at St. Peter’s Square on October 14, 2018.

The killing of priests, more than the extrajudicial killing of thousands of drug suspects, may have prompted some people, who do not usually get themselves involved in politics, to start asking whether the time has not come for all of us to seriously consider changing the President. It is not the easiest of political questions, but the fact is that it seems to be getting more serious. Apparently, there are many Filipinos who would put up with almost anything, but will have to rise when they see the blood of priests and religious being spilled.

Indeed, people have put up with DU30’s brutality and vulgarity. They even applauded when he called then US President Barack Obama, US Ambassador Philip Goldberg and UN Secretary General Ban Ki-Moon “sons of bitches,” for expressing their concern about his drug killings. They did not mind when he pulled the Philippines out of the International Criminal Court at the Hague to evade possible criminal prosecution for “crimes against humanity,” and threatened to arrest every foreigner who dared to comment on his “crimes.” They said nothing when he wrecked the Constitution by putting the House of Representatives inside his pocket, and reducing the Supreme Court into a sick joke after eight of its 15 justices ruled at his behest and against the mandate of the Constitution, that CJ Maria Lourdes Sereno’s appointment five years ago was null and void ab initio.

Everything allowed, but this
They did not even throw one benighted broadsheet into the bonfire after it ran an incredible banner headline on June 9, 2018, saying, “SC (Supreme Court) back to normal after Sereno ouster.” The Constitution and the Supreme Court died upon the CJ’s removal, and nothing about it could ever be normal again. But newspaper readers did not even notice the complete inversion of the facts.

People have not only lauded DU30 for his official aberrations and personal misconduct; they have even chosen not to collect on his unfulfilled promise to fix every major problem within weeks, if not days, as soon as he was in office. So every problem he promised to solve has remained untouched: the territorial dispute with China, beginning with the Filipino fishermen’s right to fish at Scarborough Shoal, the long festering communist and Muslim insurgencies, the drug traffic from China, Mexico and Myanmar, etc. that makes drug lords of presidential friends and relations, the deeply entrenched bureaucratic corruption, the infernal city traffic, the constantly-breaking-down Metro Manila rail transit system, the inhuman “contractualization” of factory and mall workers, etc.

Until now a patient and all-forgiving God has allowed DU30 to do every wicked thing he wanted to do to the country and its people, without any visible reprisal. But all tyrants have been warned about God’s love for his anointed ones. “Do not touch my anointed ones, do my prophets no harm,” says the Psalmist in Psalms 105:15, otherwise—and this part seems to be well-understood—“you will have your comeuppance.”

The murder of priests will not go unpunished, and DU30’s watch, I am afraid, will have to pay for it. 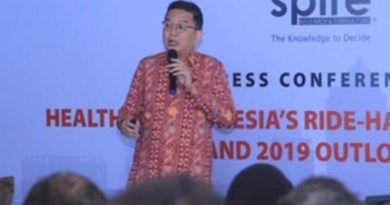 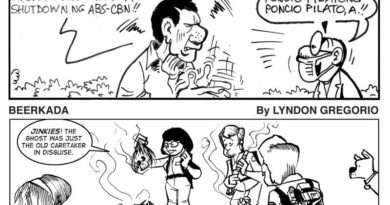 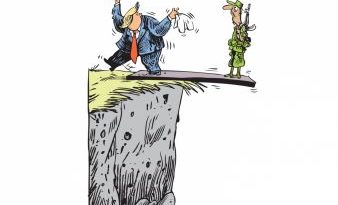 POINT OF VIEW: By “Joe” Gibana – ICE BURG IS MELTING DOWN…