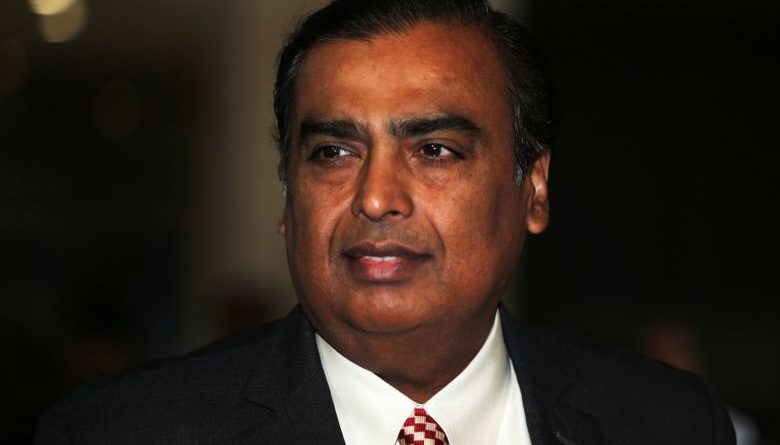 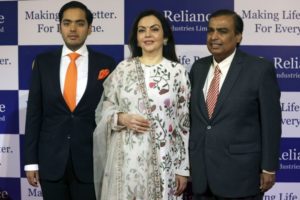 Mukesh Ambani (right), with his wife Nita and and son Anant.PHOTO: EPA-EFE
.
.

The chairman of India’s refining-to-telecoms conglomerate, Ambani was estimated to be worth US$44.3 billion (S$60.5 billion) on Friday (July 13) with Reliance Industries rising 1.6 per cent to a record 1,099.8 rupees, according to Bloomberg Billionaires Index.

Ma’s wealth stood at US$44 billion at the close of trading on Friday in the US, where the company is listed. 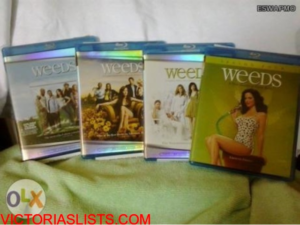 Ambani has added US$4 billion to his fortune this year as Reliance doubled its petrochemicals capacity and investors cheered the success of his disruptive telecom upstart Reliance Jio Infocomm.

Then earlier this month, the tycoon unveiled plans to leverage his 215 million telecom subscribers to expand his e-commerce offerings, taking on the likes of Amazon.com and Walmart.

“We need to broaden our horizon of expectation with Reliance,” said Nitin Tiwari, a Mumbai-based analyst at Antique Stock Broking. “They are in for something really transformational.”

The “size of Reliance will more than double” by 2025, Ambani said at the meeting.

Jio will introduce a fibre-based broadband service across 1,100 Indian cities in August in what Ambani said would be the biggest greenfield fixed-line rollout anywhere in the world.

“Jio is the driver behind the surge in Reliance,” said Deven Choksey, managing director at Mumbai-based KR Choksey Shares and Securities.

“If the company is going to double profit a few years down the line, the stock price will also double, if not more.”

A spokesman for Reliance didn’t immediately reply to an email seeking comment.

Within a week of the announcements, Reliance re-entered the US$100 billion club after more than a decade. He used the same venue two years ago to announce his disruptive telecom venture with free offers that eventually forced smaller rivals to quit and the biggest ones to merge.

The billionaire inherited Reliance from his much-storied father Dhirubhai Ambani, who is credited with sparking an equity culture among middle-class Indians and using their savings to build the group’s textile and petrochemical manufacturing units.

Dhirubhai’s death in 2002 left the group in the hands of Mukesh and his younger brother Anil Ambani. The brothers eventually split the company in 2005, as per a family pact brokered by their mother, after years of acrimony. 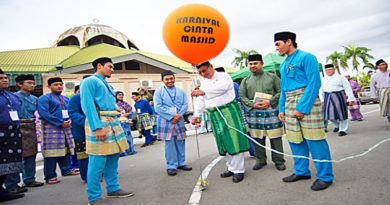 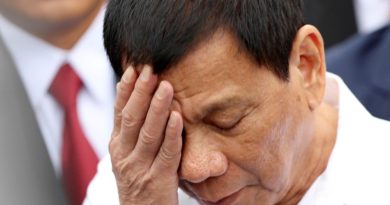 Column: Is DU30 on a free fall? | The Manila Times 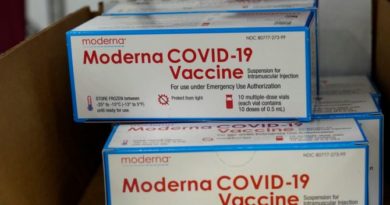