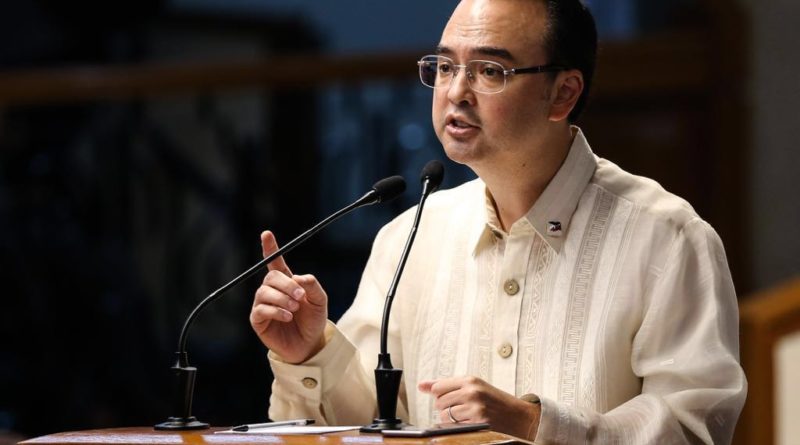 WHETHER Alan Peter Cayetano voluntarily resigned as Foreign Secretary to return to his old congressional seat in Taguig, or was fired by President Rodrigo Duterte for whatever reason remains the subject of speculation.

One cannot accuse Cayetano of overperforming in his job, and he looked entirely joyless when he announced he had quit. His was the premier Cabinet post; like the late former Sen. Raul Manglapus and the late former Sen. Blas Ople, Cayetano had given up his Senate seat for it, just as Harry Roque had given up his party-list seat in the House to become presidential spokesman, only to be fired from it; it seemed absurd for Cayetano to give up the most important Cabinet portfolio in order to become a congressman, again, for Taguig.

“Rody wants me to become Speaker,” Cayetano said. This position has also been reportedly offered to the “come-backing” former Leyte congressman Martin Romualdez, and to the outgoing senator Loren Legarda, who is running for a House seat in Antique. But in the case of these two, the leak quoted DU30 himself, not either of them.

Who chooses the Speaker? The members of the House, by law. Although DU30 has an obscene stranglehold on the House right now, one cannot be sure the same situation will prevail after the May 2019 elections. The next Congress may not want to function as DU30’s rubber stamp; when Speaker Arroyo steps down upon completion of her third congressional term, the majority may no longer want to countenance DU30’s continued violation of the doctrine of checks and balances and separation of powers.

.– SPACE RESERVE FOR YOUR ADVERTISEMENT –
.

Nor can we predict the true state of DU30’s physical and mental well-being. Presidential assistant Christopher “Bong” Go has told the nation DU30’s is “cancer-free,” according to the supposed results of his recent endoscopy and colonoscopy tests; but how many believe him? What is the real truth behind his claim? How physically and mentally fit will DU30 be after June 30, 2019? For the past two months, DU30 has been going home regularly to Da-vao, without hanging out in the evenings, contrary to his previous wont; this seems to indicate not all is well, ac-cording to close DU30 watchers.

If Cayetano had resigned on his own, without being told to do so by the President, then he must have known something we do not know, argue some analysts. And this may have to do with DU30’s real state of health. Cay-etano must have sensed the Titanic is sinking, and the better part of valor is to abandon ship.

Of course, there’s the real possibility that Cayetano was in fact fired, or asked to quit. Even if this was the case, DU30 cannot be expected to say anything about it because of their “special relationship.” Not only was Cayetano DU30’s unsuccessful 2016 running mate, he was also said to have been the first one to deliver a big bundle (from the Zamoras or the Chinese?) for his war chest.

But his performance as foreign secretary has been far below par. Nothing had prepared him for the job, so he tried to play the Chinese and American cards alternately to promote his own political interests. One complaint of the Department of Foreign Affairs personnel is that having apparently cast his eye on the 2022 presidency, Cayetano spent most of his time trying to turn the DFA into a political campaign organization instead of sharpening its tools for the actual conduct of diplomacy. He brought into the DFA a private political staff to undertake this operation, and completely politicized the work of the consular section, in the issuance of passports, visas and other consular documents, DFA sources said.

There was also an unverified, but undenied, talk in the Foreign Office of a large offshore visa-issuing operation in Hong Kong for some three million Chinese applicants, from which some high Filipino officials were supposedly guaranteed a premium of $20 per visa, minimum. The exact status of this alleged project is not known, but police intelligence sources claim the number of Chinese visitors has already breached three million, although the officially admitted figure is only 400,000.

Foreign Secretary-designate Teddy Boy Locsin will have to take a deep look into this matter when he takes over. He will need all the luck and support he can get in the world. I wish him well. He is a highly intelligent man, a former editorialist with formidable editorial skills, but the UN was his first and only exposure so far to real diplomacy. He has not had the time to make a name for himself there, but it is to be hoped that just by hobnobbing with his UN colleagues even for a short while, he has been infected with some diplomatic manners. As Cory Aquino’s erstwhile press secretary, he was quick to use his middle finger to confront his adversaries. He will have to drop that particu-lar skill, if he is to be of real help to his principal.

His first big test is likely to come up when he joins DU30 in receiving Chinese President Xi Jinping in Manila next month. A proposal for the joint exploration of minerals and other resources in the contested maritime areas be-tween the Philippines and China could be on top of the agenda. At least one senior Supreme Court justice has ex-pressed serious reservations about the constitutionality of such a proposed agreement. He needs to explain DU30’s position well.

Whatever support DU30 finally receives on this proposal, he should take extreme care to make sure the next gov-ernment would find no reason to declare any such agreement null and void ab initio, following the precedent he had set when he declared null and void ab initio then President B. S. Aquino 3rd’s 2010 proclamation granting am-nesty to former Navy lieutenant and now senator Antonio Trillanes 4th, and Aquino’s 2012 appointment of Maria Lourdes Sereno as chief justice of the Supreme Court.

Another possible big issue is China’s proposed entry into the domestic telco industry. Negotiations concerning a third telco player, after Globe and the Philippine Long Distance Telephone Company (PLDT), could create problems similar to those generated by the previous NBN-ZTE deal which nearly sank the Arroyo government. This need not happen. But the risks are there.

Under this project, China Telecom will become part of the proposed consortium via Huwaei, together with Philcom (formerly RCPI), SM Prime via Hans “Big Boy” Sy Jr., Finance Secretary Carlos “Sonny” Dominguez, Energy Secretary Alfonso Cusi, Phoenix Petroleum’s Dennis Uy and Tonyboy Cojuangco of PLDT, among others. Earlier speculations that DU30’s partner Honeylet Avanceña, his daughter Mayor Sara DU30-Carpio and son Paulo are also involved have proved negative; only Dominguez and Uy are there, according to sources, with Dominguez allegedly acting as the project’s “consolidator.”

The “third player” will use the “dark fiber backbone” already rolled out by the SM Group over the properties of the National Grid Corp. of the Philippines (NGCP). The NGCP is owned by the SM Group and some Chinese partners; it is reportedly capable of reaching 88 percent of all the country’s households. The rest could be serviced by PLDT and Globe, which the consortium does not intend to eliminate, the sources said. The equipment needed to acti-vate the dark fiber is already in place, the sources said; the frequencies formerly owned by San Miguel Corp. are expected to be awarded to the consortium, once their winning status is published.

The Constitution requires this type of business to be owned by Filipinos or by corporations or associations orga-nized under Philippine laws, and at least 60 percent Filipino-owned. This restriction is expected to be lifted very soon, according to sources, although it is not yet known how; after this, the Indonesian Salim Group is expected to surface as PLDT’s majority owners and Tonyboy Cojuangco will take over from Mr. Manuel V. Pangilinan, the sources said.

The consortium promises to be the biggest Chinese-Philippine moneymaker. But there seems to be a serious con-flict of interest related to the involvement of some senior Cabinet members. Are they there on their own, or are they fronting for some other principals? If so, who are they? This particular detail needs to be sorted out before the two presidents are asked to bless the project.

During Xi’s visit, the Philippines will not be taking part in any naval exercises on counter-terrorism, disaster assis-tance and humanitarian relief, conducted by the United States and Japan’s Self-Defense Forces in the South China Sea. This seems but fair, and no one should reproach Chinese ambassador Zhao Jianhua for insisting on it. But since the exercises had been scheduled long before the visit, DU30 could have pushed the visit to another date, instead of pulling out of the exercises. The decision to pull out could affect Armed Forces morale.

One worrisome incident comes to mind. On September 13, 2000, then President Joseph Estrada ordered an all-out assault on the Abu Sayyaf kidnappers in Basilan and Sulu. The next day US Defense Secretary William Cohen came to Malacañang, bearing a letter from US President Clinton, asking Estrada to suspend the attack because it might endanger the life of one Jeffrey Shilling, who had walked into the kidnappers’ camp. Estrada replied he had al-ready given the order and could no longer recall it. Could Estrada at least explain to Clinton on the phone, asked Cohen. It would be pointless, Erap said.

A few months later, Erap was impeached, and ousted at EDSA after the prosecution walked out during his im-peachment trial. I have never suggested any cause-and-effect relationship between the first and the second inci-dents, but quite a few others have. Am I wrong, and are they right? 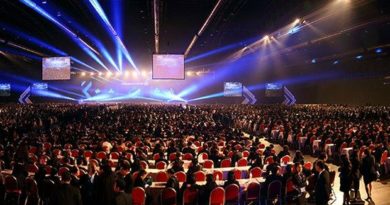 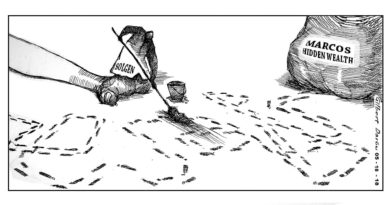 ASEANEWS EDITORIAL – CARTOONS: ‘Step back from the brink’ 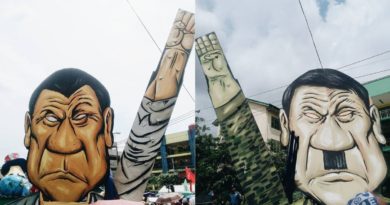