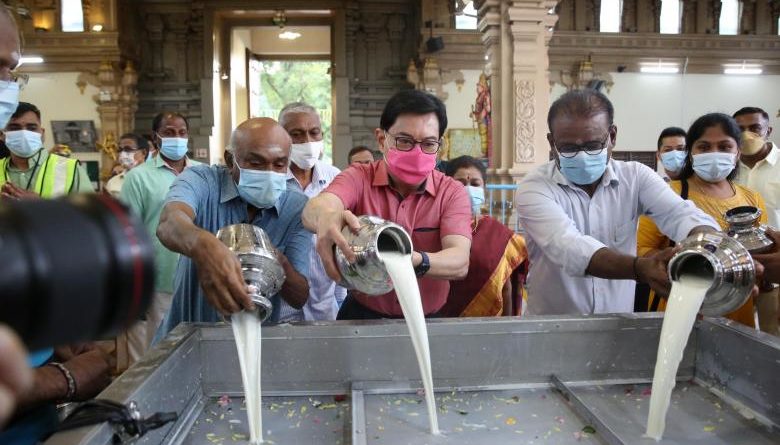 SINGAPORE – More devotees are expected to attend Thaipusam festivities on Tuesday (Jan 18) compared with last year, after restrictions were eased to allow worshippers to take part in groups of five, although entry is limited to those who are fully vaccinated.

The festivities began at Monday midnight and are expected to end at 10pm on Tuesday.

Those carrying milk pots entered the temple in a separate queue in groups of two. More than 4,000 devotees of different races carrying milk pots and clad in ceremonial yellow clothes had completed their offerings by 11am on Tuesday.

While no food was served to visitors at the temple for the second year in a row, devotees exiting after their prayers were greeted by volunteers giving out bento boxes to take home.

Deputy Prime Minister Heng Swee Keat, who was guest of honour at the festival, arrived at Sri Thendayuthapani Temple in Tank Road at 8am on Tuesday.

In a first this year, he completed a milk pot offering at the sanctum before speaking to temple staff and front-line workers and volunteers overseeing safe management measures.

Japan to assist Cambodia to become a landmine-free nation

Japan’s assistance to Cambodia in the decade’s long battle to clear vast areas of landmines in the country would perhaps be close to taking yet another step forward, going by the words of Japan’s Minister for Foreign Affairs, Hayashi Yoshimasa.

According to the Ministry for Foreign Affairs of Cambodia, a conversation to that effect took place last week between Hayashi and Cambodia’s Deputy Prime Minister and the Minister of Foreign Affairs of Cambodia, Prak Sokhonn. The Japanese minister expressed his country’s interest in providing further assistance to Cambodia for the clearance of landmines.

Bill Morse who founded Landmine Relief Fund (LMRF) which raises funds for the landmine clearing team Cambodia Self Help Demining (CSHD) acknowledged the past contributions of the Japanese government: “Japan has been funding demining work in Cambodia for quite some time.”

Decades of civil war between the various government forces and the Khmer Rouge left vast areas of the country scattered with landmines which have caused the deaths of 19,806 people, and some 40,000 injured, between 1979 and 2021 and continue to blight predominantly areas in the northwest stretching along the Thai border better known as the K5, prompting the various demining organisations to set the goal of demining the whole country by 2025.

CMAC has estimated around 4 to 6 million landmines in Cambodia, whereas some estimate the number might scale up to 10 million. 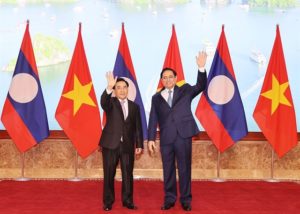 As the Myanmar crisis continues to loom large, ASEAN foreign ministers are slated to meet for their annual retreat next week in Siem Reap, Cambodia, in a potential setup for a heated discussion following Cambodian Prime Minister Hun Sen’s widely criticized visit to Myanmar over the weekend. Cambodia, as the current ASEAN chair, has the complicated task of handling the protracted humanitarian, political and economic crises in an ASEAN member state, nearly a year after the Myanmar military ousted its democratically elected government on Feb. 1, 2021. 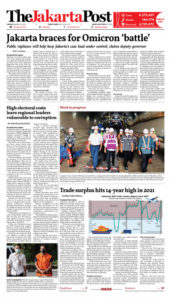 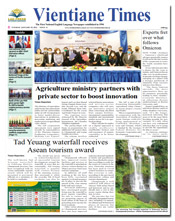 The Department of Water Supply of the Ministry of Public Works and Transport and the East Meets West Foundation in Laos on Monday signed a Memorandum of Understanding to implement the third phase of the Engaging Public, Private and Women in Water Sanitation and Hygiene Project.

The third phase of the project, which is being funded with US$1.4 million by Charity: Water, will see the installation of water supply systems through contributions from the state, private players and local communities.

The third phase of the project will run from the date of the signing of the MOU until December 31, 2023. 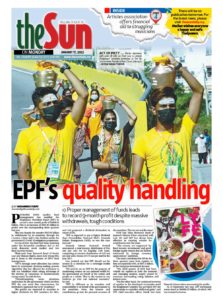 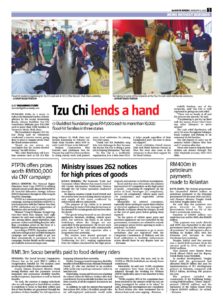 Telenor Group agreed to sell a remaining 51% stake in a mobile financial services provider in Myanmar in a deal that will see Norway’s biggest telecommunications firm move a step closer to exiting a country that has seen increased civilian strife since a military coup last year.

The stake in Digital Money Myanmar, also known as Wave Money, will be sold to Singapore-listed Yoma Strategic Holdings Ltd., which will lead a consortium of investors to fund the $53 million purchase, the companies said in a stock exchange filing Monday. Yoma Strategic is controlled by Myanmar-born property tycoon Serge Pun.

Telenor last year also agreed to sell its mobile operations in Myanmar to Beirut-based M1 Group for $105 million. However there have been reports of a delay in closing the deal as the junta wants a Myanmar buyer instead and Pun is seen as one of the interested parties for the assets.

The Norwegian firm is among the companies leaving Myanmar, which has plunged in to a turmoil after the February coup led by army chief Min Aung Hlaing. The latest deal means Yoma will be the largest shareholder of Wave Money, which handled $8.7 billion in remittance and payments in 2020, accounting for around 12% of the country’s gross domestic product.

The agreement also completes the divestment process announced in June 2020, when Telenor sold 34% in Wave Money for $76.5 million. Wave Money was formed in 2016 as a joint venture between Telenor, Yoma Bank and Yoma Strategic Holdings. 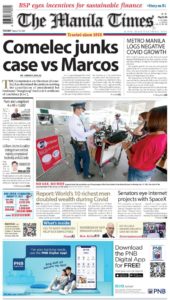 SINGAPORE – The Singapore Armed Forces (SAF) is planning to install electric vehicle (EV) charging stations at two of its camps for permanent staff and visitors to use, as part of its efforts to go green.

In what appears to be a trial, four charging stations will be installed at Kranji Camp III and two at Gombak Base, according to a tender put up by the Ministry of Defence (Mindef) on Jan 10.

Ms Rachada said the new visa regulations need to be formally announced by the two cabinet ministers. The prime minister wanted that to be soon. 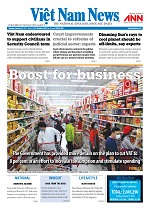 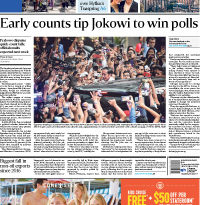 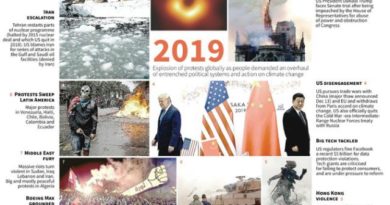