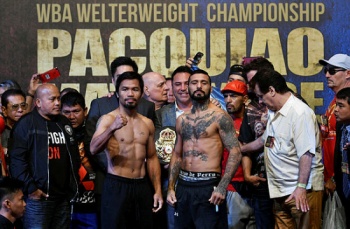 KUALA LUMPUR: Filipino legend Manny Pacquiao weighed in Saturday comfortably under the 147-pound (67kg) limit and said he was “ready” to win back the welterweight belt against WBA champion Lucas Matthysse of Argentina.

Pacquiao, the only man to have won world titles in eight weight divisions in a glittering 23-year career, tipped the scales at 146 pounds.

“I am ready. Everything is under control,” said the 39-year-old Pacquiao. “I am motivated, I am happy and I am hungry.”

The heavily tattooed Matthysse played up his one-inch height advantage by looking down on Pacquiao as the two came face-to-face for the last time before Sunday’s 12-round showdown.

“I am feeling good,” Matthysse told AFP as he was about to demolish a fruit platter for his post weigh-in meal after coming in the heavier man, just under the limit at 146.7 pounds.

“I made the weight, I’m ready to eat and I’m ready for the battle tomorrow.”

The weigh-in was held in mildly chaotic scenes at a packed auditorium in the Malaysia International Trade and Exhibition Centre in Kuala Lumpur.

Hundreds of mainly Filipino fans pushed forward to get a glimpse of the fighters as they left, prompting fears the stage might collapse under their weight before order was restored.

Pacquiao is challenging “The Machine” Matthysse for the World Boxing Association welterweight belt at the Axiata Arena on Sunday, knowing defeat could lower the curtain on one of the greatest careers in boxing history.

Pacquiao faced calls to retire from friends, family and even his Hall of Fame trainer Freddie Roach when he lost the WBO belt to journeyman Australian Jeff Horn a year ago.

Roach has been replaced for the fight by Pacquiao’s long-term friend and cornerman Buboy Fernandez and another defeat could see the veteran “National Fist” hang up his gloves for good.

But victory for Pacquiao (59-7-2, 38 KOs) would see him become a five-time welterweight world champion and extend his legendary status and his life in the ring beyond his 40th birthday in December.

Pacquiao is going for his 60th victory since turning pro in 1995, but despite winning 38 of his first 47 fights by knockout, he has not stopped an opponent in nine years.

Knock-out specialist Matthysse has finished 36 of his 39 wins inside the distance and took the vacant WBA belt after an eighth-round stoppage of Thailand’s Teerachai Sithmorseng in January.

But the last time he faced an opponent of Pacquiao’s calibre he was knocked out in the 10th round by Ukrainian super lightweight world champion Viktor Postol in 2015.

Matthysse suffered a fractured left eye socket after taking a beating from Postol that put him out of boxing for 19 months and this is only his third fight since.

Carlos Canizares of Venezuela (20-0-1, 16 KOs) puts his WBA light flyweight title and unbeaten record on the line against Chinese rookie Lu Bin (1-0, 1 KO), who could become the first boxer in history to win a world title in his second professional fight. — AFP 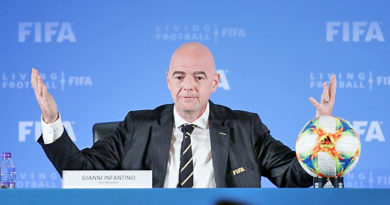 FIFA to use ‘power of football’ to combat coronavirus