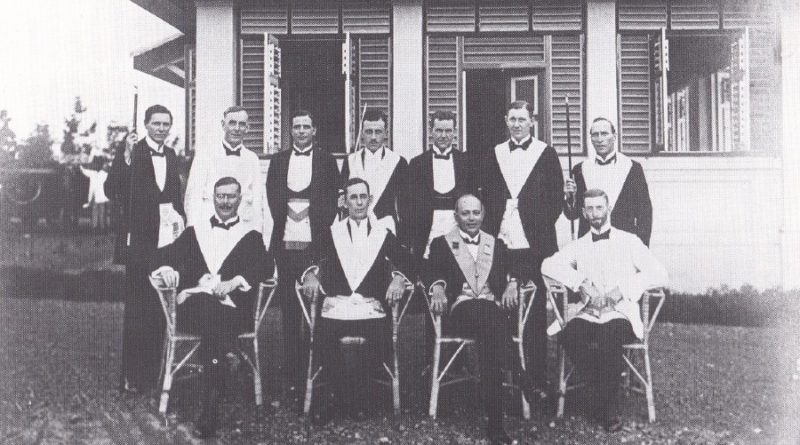 “WHAT else do you have?” I ask the elderly Chinese man after purchasing two pairs of wooden coffee shop chairs. He pauses momentarily to think before heading off into his bedroom without saying another word.

Introduced by a fellow collector, I’d made the trip to Pengkalan Kundor earlier in the morning and had quite a tough time locating the seller’s standalone wooden house. Being the sole occupant, his house is nearly filled to the brim with antiques accumulated over the years, ranging from vintage British bicycles to Chinese lacquer baskets.

“Hopefully these may interest you,” the seller blurts out, handing me a small cardboard box filled with all sorts of bric a-brac.

While a large majority of the items are modern trinkets and ordinary school badges, an unusual looking pendant suddenly catches my eye. My heart skips a beat when I see the words Lodge Kedah No. 3830 on the pendant. 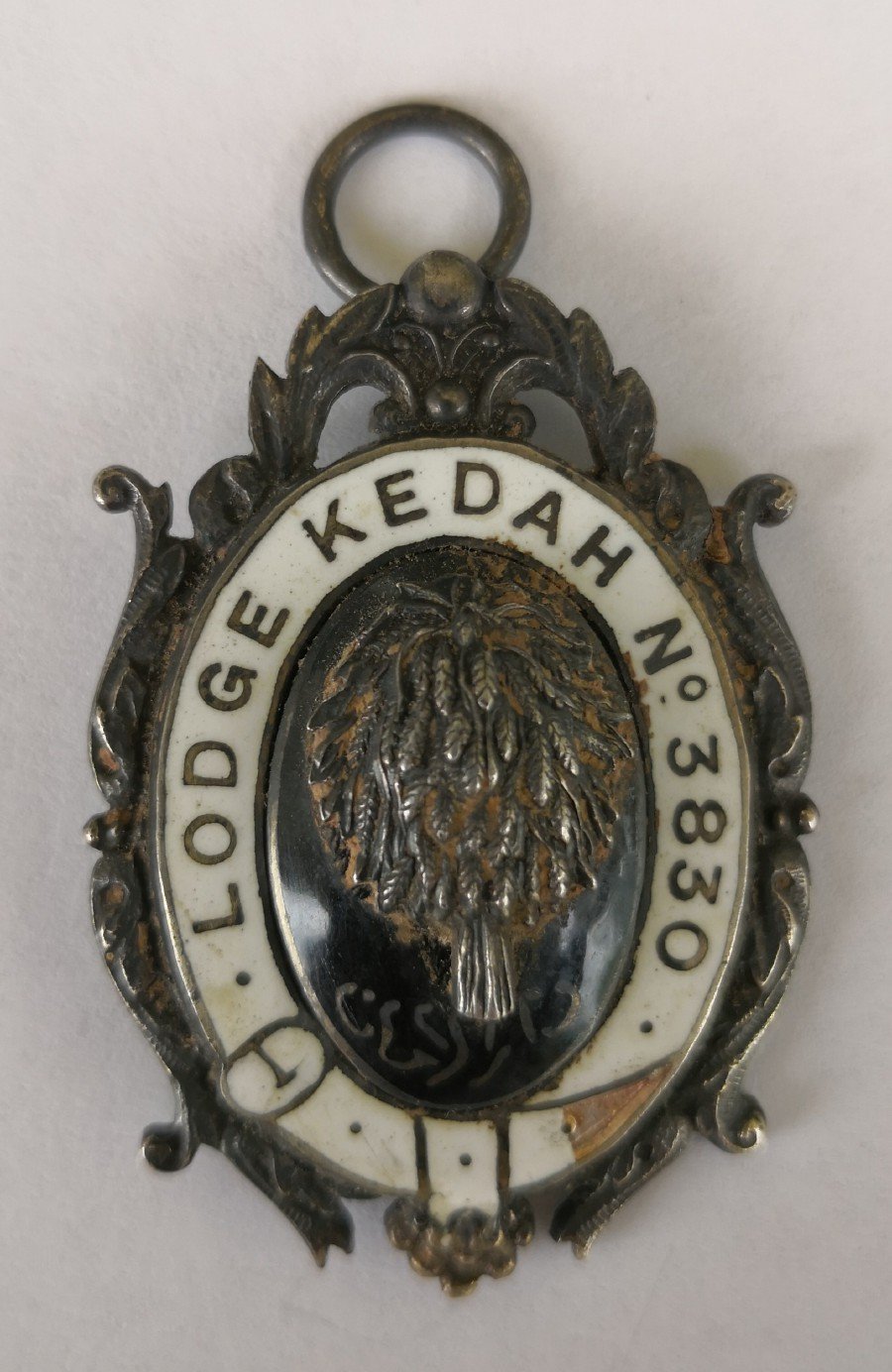 The pendant that started the writer’s voyage of discovery.

Upon closer examination, I soon ascertain that the item is indeed a genuine and extremely rare local Masonic Lodge memorabilia. Trying hard to contain my excitement, I enquire about the price and the origin of the pendant while showing the equally intrigued man the puzzling bits of soil remnants still stuck to the odd corners of the central design which bears a close resemblance to the padi sheaf featured in the first Kedah stamps issued in 1912.

“I’ve been keeping this for more than two decades after finding it while digging for old bottles behind the old Sungai Petani General Hospital. Obviously it has something to do with Kedah but I can’t tell you anything more. It must be old judging from the design. Give me RM100 and it’s yours,” he says.

The asking price is a little steep but I agree to it. Relishing the opportunity to research on the origins of the Freemasons in Kedah, I clear my schedule for the remainder of the week to concentrate on the task of scouring through every available resource at libraries, private collections and, of course, cyberspace.

After five days of intense fact-finding and two trips down to Sungai Petani, I finally gather enough information to shed light on Lodge Kedah No.3830 which coincidentally celebrated its centenary on Aug 2, 2018. ARRIVAL OF THE FREEMASONS

The introduction of Freemasonry in Malaya was largely attributed to the arrival of the British East India Company in Penang on July 17, 1786. Naturally, the island became the first foothold for the Freemasons when the Royal Prince of Wales Lodge was consecrated in 1875.

After that, other Masonic Lodges in the centrally-located Malay states were established in relatively quick succession. The Perak Jubilee Lodge in Taiping began in 1887 while Read Lodge in Kuala Lumpur was consecrated in 1889.

Masonic activities only reached the northern portion of the Malay Peninsula after the signing of the Anglo-Siamese Treaty in1909.That agreement effectively transferred all Siamese rights of suzerainty, protection and control over Kedah, Perlis, Kelantan and Terengganu to Great Britain.

The subsequent appointment of George Maxwell as Kedah’s first Adviser and the influx of British civil servants effectively cleared the path for the arrival of European pioneers keen to set up rubber plantations in the fertile plains in the state’s central and southern parts.

Without a doubt, it was these settlers who ultimately introduced the practice of Freemasonry to Kedah. Naturally, the centrally-located town of Sungai Petani, and not the further north Alor Star state capital, became the obvious choice for the founders of Lodge Kedah to set up their chapter.

For more than half a century after that, the European planters formed the back bone of this establishment. According to records held at the United Grand Lodge of England library, 15 Masons formed the initial group that made up Lodge Kedah.

Led by the state’s Public Works Department’s chief draftsman Charles Geoffrey Boutcher, the men either held high positions in the civil service or rubber estates in the state. The earliest reference to the establishment of Lodge Kedah was in the Penang chapter’s half yearly communication dated Nov 9, 1917.

It announced that a petition had been sent to England for sanction to open a Lodge in Sungai Petani, Kedah. Another announcement was made on Feb 28, 1918 saying that the petition had been granted and the consecration of Lodge Kedah could take place after the arrival of the Warrant. 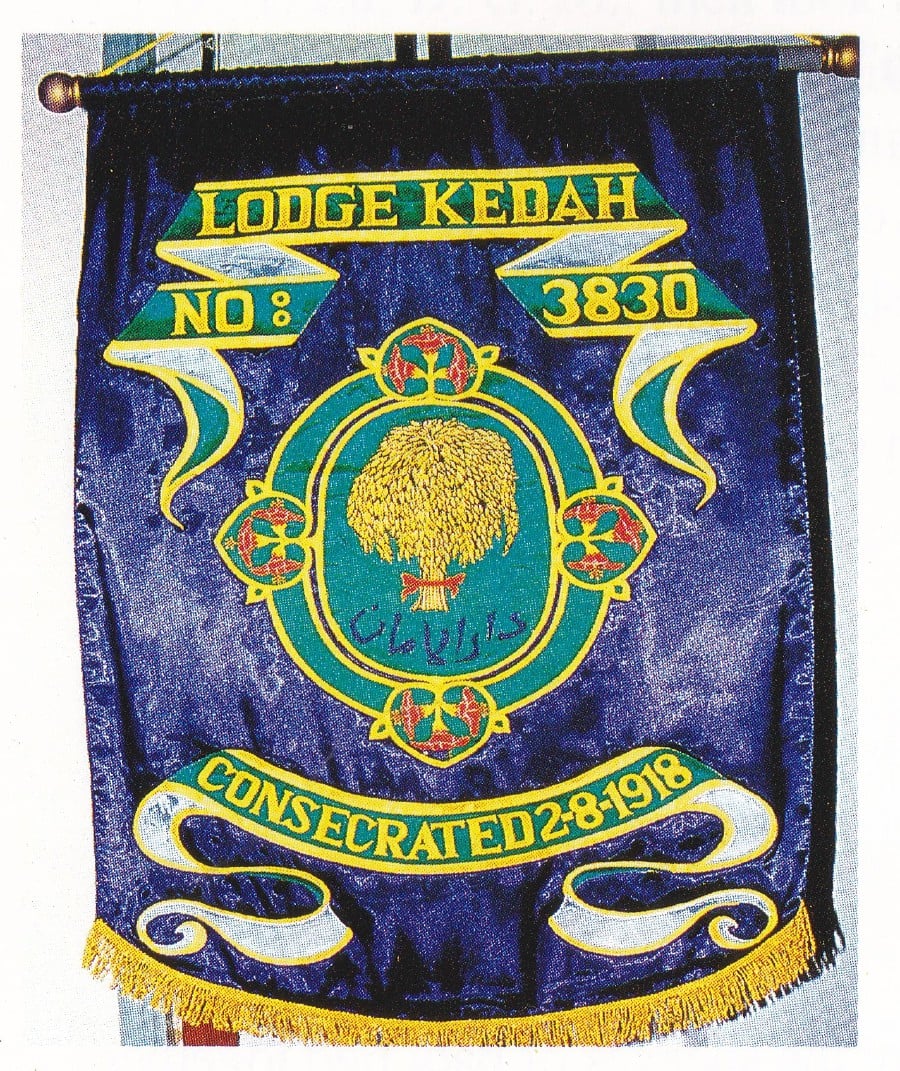 More than a week before the determined consecration date of Aug 2, 1918, the District Grand Master of the Eastern Archipelago, F.M. Elliot and several others boarded a ship named Ipoh and headed up the coast.

Captained by J.M. Daly, the vessel stopped at Port Swettenham (Port Klang now) to pick up more Masonic members. The party disembarked in Penang and took the 2.30pm train up to Sungai Petani where they spent the night at the Government Rest House.

The members of the entourage was so numerous that every inch of the place was occupied. Unsubstantiated reports even told of members sleeping on the verandah and roof! During the Lodge Kedah consecration ceremony, Elliot installed Frank Blackwood Sewell as the first Master of the Lodge. Among the 11 officers elected were Justice Percy Julian Sproule (State Lawyer), Alexander William Davidson (State Surveyor) and James Gorman (State Engineer).

By Dec 31, 1918 membership increased significantly and the total amount of Lodge Dues paid to the Grand Lodge in England was a respectable three pounds, seven shillings and six pence. The decade following 1920 saw a period of rapid expansion for Lodge Kedah.

A Lodge Library was formed when every member presented a book while Sewell contributed a bookcase. A member living in Penang contributed an ornate teak and copper charity box while calls for a Lodge Organ was subsequently answered.

Lodge Kedah received visits from other Masonic Lodges in Malaya as a way of strengthening ties. Gottlieb Lodge held its first Mark Master Masons meeting in Sungai Petani on Feb 18, 1927 while the First Victoria Jubilee Chapter’s regular convention made their presence felt a month later on March 16. 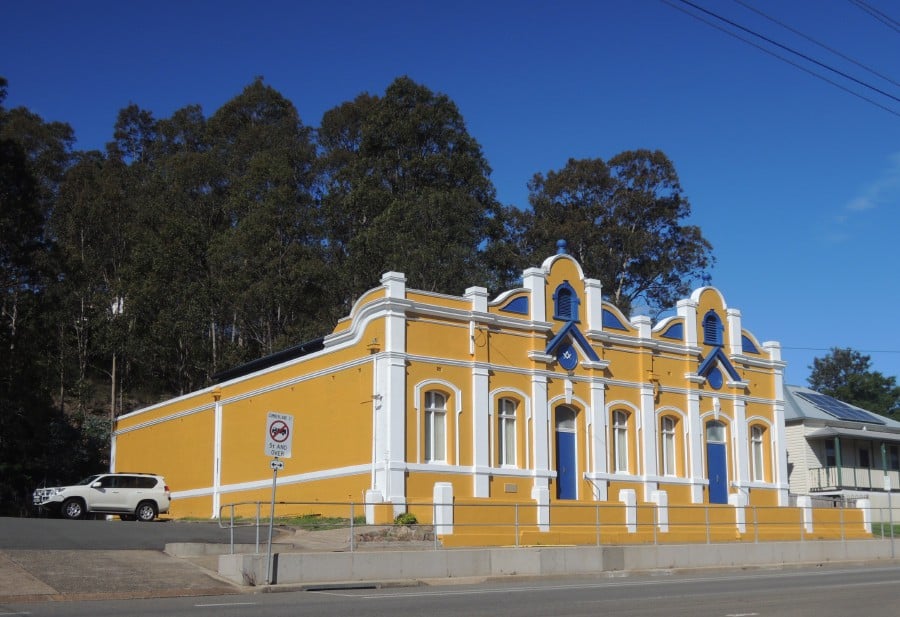 Freemason Lodges can still be found worldwide like this one in the tiny village of Cessnock inNew South Wales, Australia

The Great Depression in the early 1930s was the longest, deepest, and most widespread economic slump of the 20th century. Malaya wasn’t spared and suffered severe financial hardship. By 1933, Lodge Kedah became the greatest casualty of this distressing condition among its fellow Lodges in Malaya.

At that time, Lodge Kedah only had 48 members and about half of them were scattered all over Malaya. Financial difficulties eventually prevented outstation members from attending Lodge Kedah’s monthly meetings.

Owing to the severe drop in attendance, no ceremonial work was conducted for more than a year and meetings were reduced to only once every quarter. Fortunately, the ill effects of the Great Depression was short-lived and monthly meetings were reinstated on Feb 10, 1934. By 1936, surplus funds enabled the committee to commence renovations and purchase new furniture.

By1938, reports of imminent war clouds drifting over Europe reached Malaya. Lodge Kedah contributed to the war effort by entertaining 26 Masonic members from HMS Medway and her attendant submarines.

The flotilla was on its way to Singapore for a refit when plans to visit Sungai Petani was made. To everyone’s delight, the naval officers gave a musical concert performance at the end of the get together. HMS Medway was the first purpose-built submarine depot ship constructed for the Royal Navy. Built by Vickers Armstrong at Barrow-in-Furness in the late 1920s, the ship served on the China Station before the Second World War.

Sadly, a German U-boat fired two torpedoes and sank HMS Medway off the coast of Port Said on June 30, 1942. Thirty men were lost in the sinking while 47 of the 90spare torpedoes on-board floated free of the wreck and were salvaged. 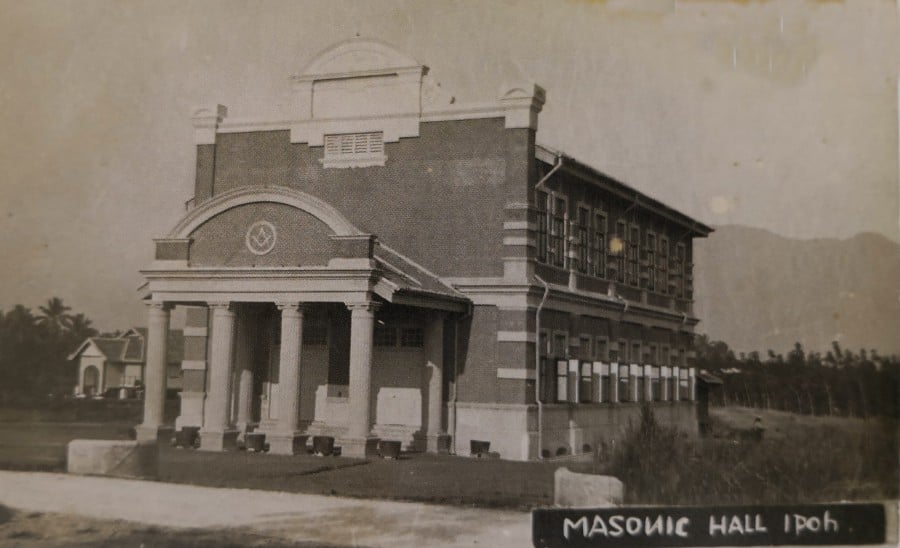 In October 1941, an Indian army officer attached to the Punjab Regiment, John Onslow Graham became a member for Lodge Kedah. Stationed at Tanjong Pau and Kampong Kelubi in Jitra, Graham saw action in the Battle of Jitra which took place when the Japanese attacked Kedah on Dec 11, 1941.

The British forces subsequently withdrew. Further south at Thompson Ridge in Kampar, Graham and his men carried the first and second lines at bayonet’s point against a storm of heavy shelling. In the final charge, with only 30 men left, a mortar bomb blew off both Graham’s legs below the knees just as he was about to reach the last Japanese trench. Even then, he kept on hurling grenades at the enemy while kneeling on his shattered stumps and shouting brave words of encouragement to his comrades. Soon after though, Graham collapsed and died.

Upon hearing news about the Japanese advancement, Masonic members rushed to the Lodge, which was located near the Sungai Petani gaol, in an attempt to retrieve the Warrant and other important documents. Unfortunately, the building was securely locked and the caretaker was nowhere in sight.

During the Second World War, Lodge Kedah was looted and used by the Japanese as coolie quarters. By the time the war ended, the derelict building had become a goat shed. 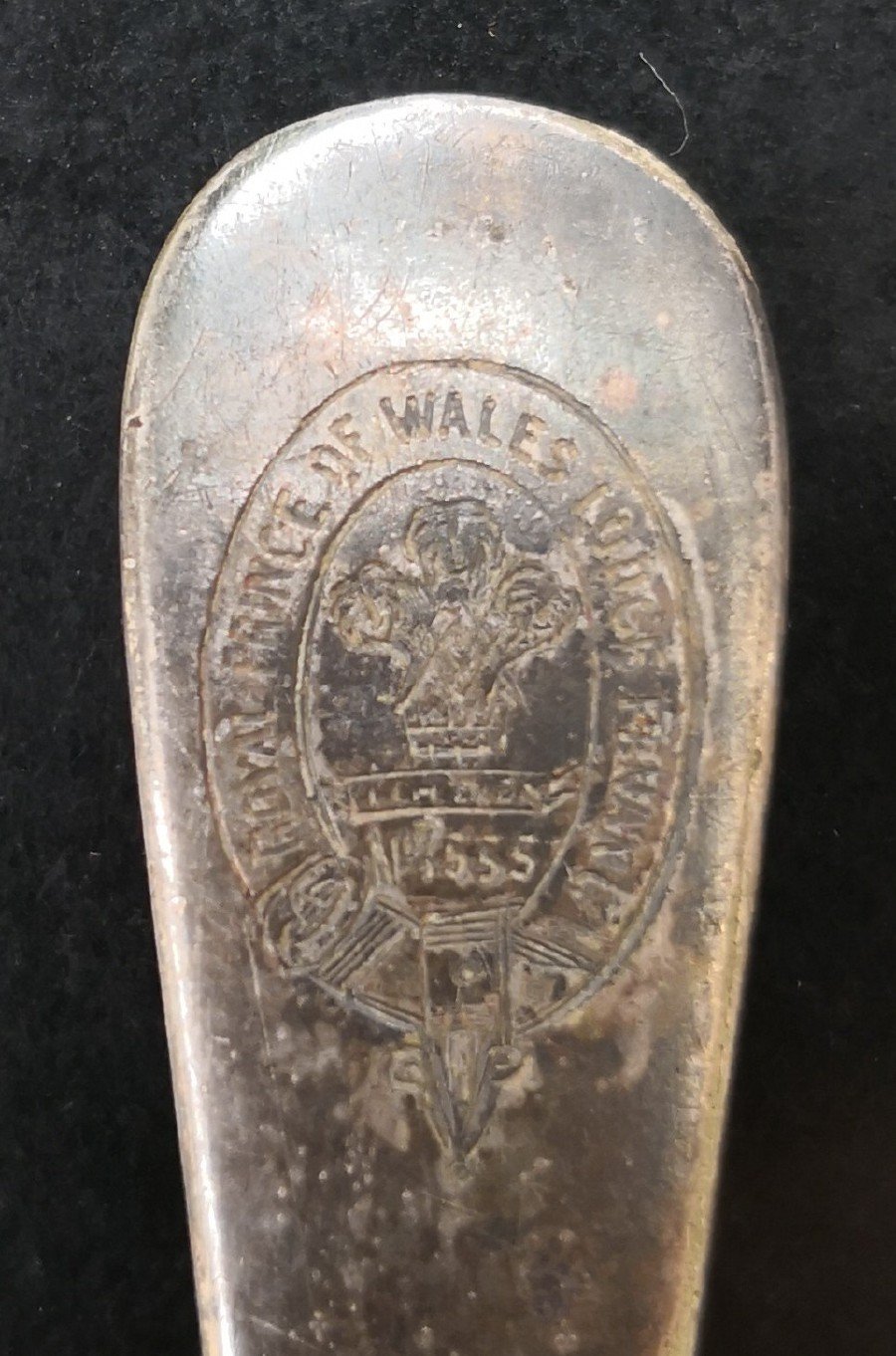 The Royal Prince of Wales Lodge crest decorating the tip of asilver spoon.

As a result, 14 Lodge members decided to hold their first post-war meeting at a junior flat belonging to J.J.P. Davies located on the first floor of the Hong Kong & Shanghai Bank (HSBC now) on July 12, 1946.

The premise, located along Jalan Bank and directly opposite Sungai Petani’s Queen’s Cinema Hall, continued to serve the purpose of the members until February 1947. By that time, a sum of $2,500 had been raised to restore the Lodge Kedah building back to its former glory. In the interim, the March and April meetings were held at Bedong medical officer, A. L. Dunlop’s house.

On May 9, 1946 Lodge Kedah resumed normal meetings at its refurbished premises. Committee members offered rewards for the return of Lodge property lost during the Japanese Occupation. Based on public feedback and with police help, a few pieces were retrieved from a nearby furniture shop.

A new danger in Malaya arrived in 1948 when the communist terrorists began their 12-year armed insurrection. The bandits targeted isolated rubber estates and it wasn’t uncommon to see planters arriving at Lodge Kedah for meetings in armour plated saloon cars or jeeps with their fully armed Special Constables as escorts. The setting up of the Royal Australian Air Force (RAAF)base in Butterworth in the years leading up to the end of the Emergency benefitted Lodge Kedah. Its meeting on Dec 11, 1964 saw six RAAF airmen signing up as members. More joined in the following months.

Things began to change dramatically for Lodge Kedah in the late 1970s with a sharp decline in European membership. Many retired and left Malaysia while others were transferred to other countries.

Acknowledging the end of an era, Lodge Kedah began opening its doors to non European members. During my final research visit to Sungai Petani, I stopped by the old General Hospital and tried to imagine how my precious pendant could have ended in the dirt.

Could it have happened during the chaotic days before the Japanese forces arrived? Taking a final look at the pendant before heading to the car, I suddenly notice something that had miraculously eluded me all this while —a string of Jawi letters below the central design denoting Darul Aman, the honorific title of Kedah!

Directly translated, it means Abode of Peace. Clearly, there are still many more things that I’ve yet to discover about Lodge Kedah but that will have to wait for another day.  By Alan Teh Leam Seng 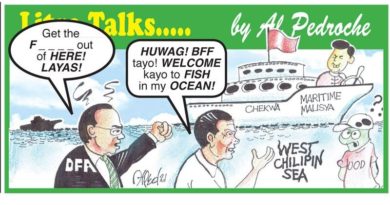 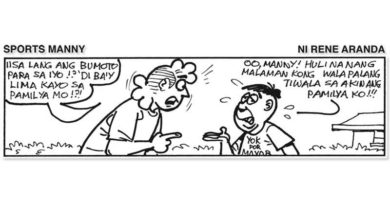 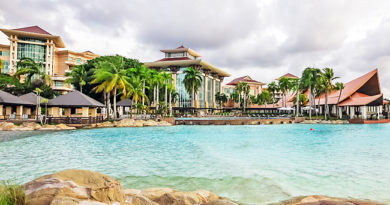